Status of a look. It is included in the Red List of RB (category 3). 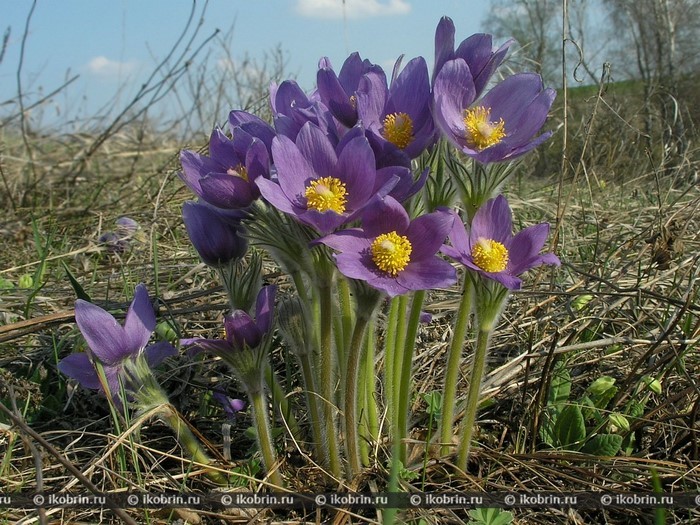 Description. Grassy polikarpik to 30 — 40 (50) height of cm, with a many-domed rhizome and a powerful vertical root. Leaves are palchato-rassechyonny, gustoopushyonny, with sedentary segments, develop after blossoming. Plates of radical leaves with (7) 17 — 30 (50) final segments and teeth. The stem leaves which grew together near the basis and altered in a kolokolchaty, gustovolosisty obvyortka, rassechyonny on narrow, turning green in the top part of a segment. Final segments of leaves 3 — 15 mm wide. Tsvetonosa during blossoming 8 — 20 cm high. Flowers oboyepoly, aktinomorfny, single, top, shirokokolokolchaty. the m opened, very large, almost upright. Leaflets of an okolotsvetnik 6, they violet, outside trimmed. Ovaries are hairy, on a top delayed. Fruits from numerous hairy oreshkoobrazny balsas, in the top part with very long plumose and hairy nose [1, 2].

Features of ecology and biology. Lives on slopes and flat thalwegs of steppe beams, on edges of the bayrachny woods, among bushes on chernozems, sandy loams, is more rare on stony substrata. Prefers fertile soils of easy mechanical structure. Mezokserofit. Blossoms in April-May. Reproduction exclusively seed. Seeds have no dormant period and quickly lose viability. In places where this look meets together with a lumbago meadow, hybrids with intermediate morphological features are formed.

The limiting factors. Plowing of steppes, collecting plants on bouquets and excavation, pasturage of cattle. Number and tendencies of its change. Total number is quite big, however many populations are reduced, and locations disappear because of economic activity of the person.

The taken and recommended protection measures. Control of dynamics of populations, and if necessary — creation of microwildlife areas is necessary. Introduction to broad culture as an ornamental plant and cultivation of landing material in nurseries is expedient. Data on a possibility of preservation of a look in the conditions of culture. It is cultivated in many botanical gardens. It is used in decorative gardening, though has certain difficulties at cultivation.