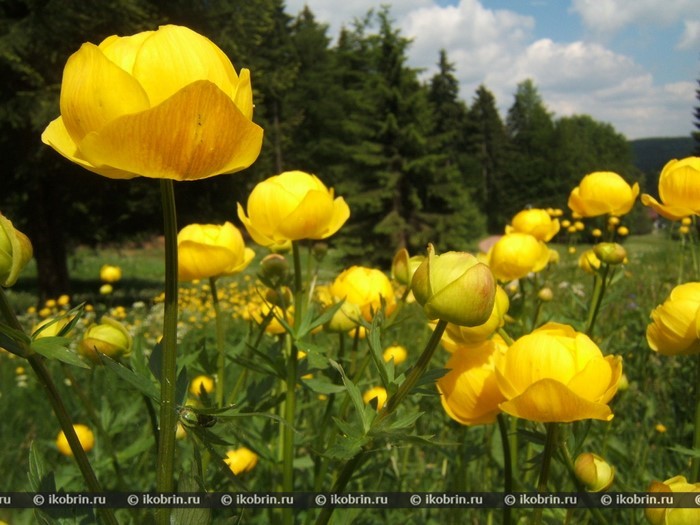 International importance:
Under the state protection in the republic it is for the first time taken in 1964. It is included in the Red List of Belarus of the 1st and 2nd editions (1981, 1993). It is protected in Poland.

Description:
Perennial grassy plant with a short rhizome and an upright stalk 30-80 cm high. Leaves are palchato-pyatirassechenny, with rhombic, on a top zubchato the made an incision shares. Radical leaves and lower stem - petiolar, top - sedentary. Stem leaves (3-7 pieces) with the plates which are becoming shallow up. Flowers large, with a diameter up to 5 cm, on long pedicels, single, are more rare than them 2 (rarely more), spherical because of strongly concave, leaning at each other numerous wide oval bright yellow chashelistik closing internal part of a flower. A fruit – a multileaflet.

Habitats:
Has quite wide ekologo-phytocenotic amplitude. Grows on crude meadows, edges and glades coniferous (is more often than fir-tree), mixed (coniferous and broad-leaved and coniferous and small-leaved) and the chernoolkhovy woods; avoids very poor, very sour and dry soils, does not take out long flooding. Treats photophilous plants, but can maintain small shading.

Number and tendency of its change:
Usually grows at separate copies or small groups, places (the neighborhood of the villages of Zhukovka and Big Dubrovka in the Minsk district, the vicinity the item of Ruba in the Vitebsk district, etc.) forms quite numerous populations, but on limited squares. Careful searches in 1993-1996 did not reveal earlier specified locations in Volozhinsky district. In a number of the populations observed many years (in the Minsk and Volozhinsky districts) the number of individuals was considerably reduced. In culture in weather climatic conditions of Minsk and Vitebsk vysokoustoychiv, it is perspective for green construction; make multiple copies seeds and vegetativno.

Major factors of threat:
Anthropogenous: economic land development (plowing of meadows, building of sites by dachas etc.), drying and meliorative works leading to change of the hydrological mode of habitats, the raised recreational loadings (trampling, collecting the blossoming plants) and pasturage of cattle, early mowing. Natural: natural change of fitotsenoz (overgrowing lugovin the wood, formation of communities with domination of plotnokustovy cereals and a krupnoosochnik).

Protection measures:
Grows in territories of national parks "Bialowieza Forest", "Braslau Lakes", "Narochansky" and "Pripyat", a number of wildlife areas ("Volmyansky", "Glebkovka", "Gorecki", "Ivenchik", "Kaykovsky", "Prilepsky", "Stiklevo", "Yukhnovsky", etc.) . It is grown up in the Central botanical garden NAN of Belarus, botanical gardens BGU and the Vitebsk university, and also on a site in the Republican ecological center of pupils and youth (Minsk); it is long since cultivated by the population of the republic. Audit of the known locations and periodic control of a condition of populations, prevention or restriction of negative anthropogenous impacts in places of natural growth are necessary (mowing should be carried out in the second half of summer); the organization of the biological wildlife area in Cherikovsky district of the Mogilev Region where the kupalnitsa European grows in a complex with other rare species, and also broader introduction of a look to culture as an ornamental, medicinal and melliferous plant is recommended.