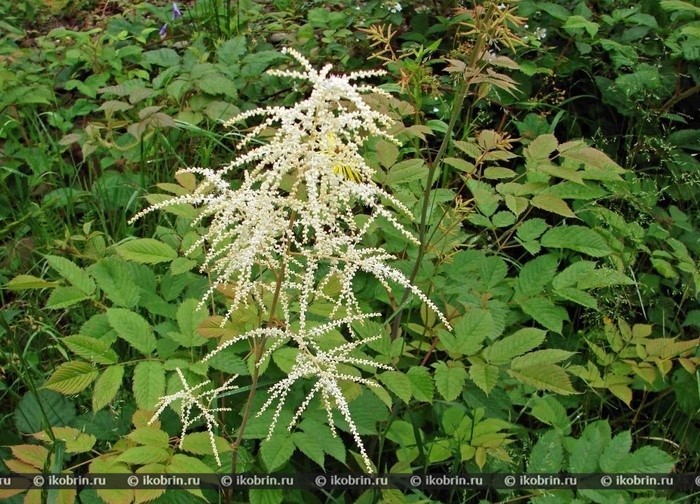 International importance:
It is included in the Red List of Belarus of the 1st and 2nd editions (1981, 1993). It is protected in Poland.

Description:
Perennial grassy dvudomny plant with an upright not branchy stalk up to 2 m high, usually only in an inflorescence branched. The rhizome is thick, ligneous. Leaves without stipules, next, dlinnochereshkovy, up to 1 m long, 2-3-peristoslozhnye. Leaflets are ovoid, it is delayed - pointed, on edge dvoyakopilchaty, naked or with scattered hairs. The general inflorescence - the top friable whisk up to 50 cm long consisting from long, narrow after povisly brushes. Flowers ochroleucous, small, with a diameter of 2,0-3,5 mm, on very short pedicels. Fruits - brown leaflets, 1,5-2,0 long, mm naked or redkoopushenny.

Rasprostraniyeniye:
Generally mountains of Central and Southern Europe, on the European plains the number of locations of a look decreases. Island concentrations of populations, known in Belarus, are extreme on northeast border of an area. Locations of this relic, by origin a preborealny Central European look are revealed in Bialowieza Forest, on Novogrudsky and Kopylsky ridges and Regions are located in territories Brest (Baranovichsky, Kamenetsky and Pruzhansky districts), Grodno (Korelichsky, Novogrudsky and Svislochsky districts) and Minsk (Kletsky, Kopylsky, Stolbtsovsky and Chervensky districts). Earlier gerbarny collecting confirms finding of a look in vicinities of Nyankov (Novogrudsky district of the Grodno Region). According to literary data the look was known in vicinities of Rusotin (Korelichsky district the Grodno Region), Kopylya, Nesvizha, Novogrudka, Svislochi (the former Grodno province) and Minsk.

Biology:
Blossoms from the middle of June prior to the beginning of August. Entomofil. Fructifies in August. Anemokhor. Reproduction is seed.

Number and tendency of its change:
Very small look which is found absent-mindedly single plants and groups till 5-20 of individuals on small squares (to 0,05 hectares). The most numerous population numbering about 200 individuals (from them more than a half blossoming) and the occupying space about 300 sq.m, is found in 2004 in vicinities of of Tsvirki of Stolbtsovsky district of the Minsk Region.

Major factors of threat:
Can disappear from the known locations as a result of cabins of the wood of the main use. Collecting the blossoming plants on bouquets significantly limits possibilities of a look to be settled by seeds.

Protection measures:
"Morochansky" and "Trostyanitsa" grows in territories of National park "Bialowieza Forest", wildlife areas. It is grown up in botanical gardens NAN of Belarus and the Vitebsk university, in the Republican ecological center of pupils and youth in Minsk and on personal plots. It is necessary ordinary to forbid continuous cabins of the main use in places of growth of a volzhanka; to periodically carry out ecological and biological control of a condition of the known populations; to purposefully carry out search of new locations; to make multiple copies and settle artificially in natural ecotops; among the population to carry out explanatory work about inadmissibility of collecting inflorescences as the natural course of renewal of populations is broken; to recommend to the population to enter more widely a look into culture as an ornamental, medicinal and melliferous plant.