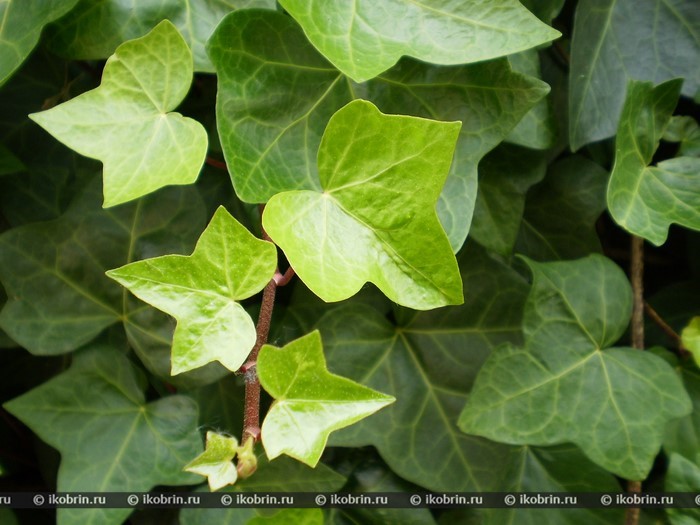 International importance:
Under the state protection in the republic it is for the first time taken in 1964. It is included in the Red List of Belarus of the 1st and 2nd editions (1981, 1993). It is protected in Lithuania, Latvia and Poland.

Description:
Long-term liana with the thin branchy stalk (in the conditions of Belarus reaches length of 3-5 m) which is creeping on the ground or climbing trunks of trees by means of small air roots suckers. Leaves are dlinnochereshkovy, next, leathery, brilliant, green; on fruitless escapes leaves heart-shaped, generally 3-5 bladed (an average share of the blade large), on tsvetonosny - ovoid or lantsetny. Flowers greenish, five-membered, collected in multiflowered spherical umbrellas. A fruit - the blue-black berry with 3-7 seeds ripening in the spring of the next year.

Rasprostraniyeniye:
Relic, by origin the preborealny Central European mountain look which area covers southwest Europe including the British Isles, the southern part Scandinavian, Pyrenean, Apenninsky and the southern half Balkan peninsulas, comes into the Western Asia and Japan; in the east of Europe meets in Baltic, the Kaliningrad Region, Belarus, Ukraine and Moldova. In Belarus is in island sites of growth and separate localities on eastern frontier of an area and beyond its limits. Locations in the Brest, Zhabinkovsky, Ivatsevichsky, Kamenetsky, Kobrin, Maloritsky and Pruzhansky districts of the Brest Region, in Osipovichsky district Mogilev regional are known. Earlier it was brought for Lida, Shchuchin, Brest.

Biology:
The look in natural habitats practically does not blossom on east limit of distribution, reproduction vegetative. Young year escapes usually become frozen at height of snow cover. In recent years in Brest about. (in the neighborhood of the cities of Brest and High) blossoming and fructification of an ivy in nature was noted that it is probably connected with mitigation of winters. It is pollinated by insects.

Number and tendency of its change:
Forms mainly small, seldom considerable thickets (in Osipovichsky district of the Mogilev Region).

Protection measures:
It is protected in the territory of National park "Bialowieza Forest", in the landscape wildlife area "Pribuzhsky Polesia" (The Brest district). It is cultivated in botanical gardens, parks and as a houseplant. Audit of the known locations, control of a condition of the known populations and search new, the organization of protection of all locations of a view with prohibition in places of growth of anthropogenous influences are necessary.