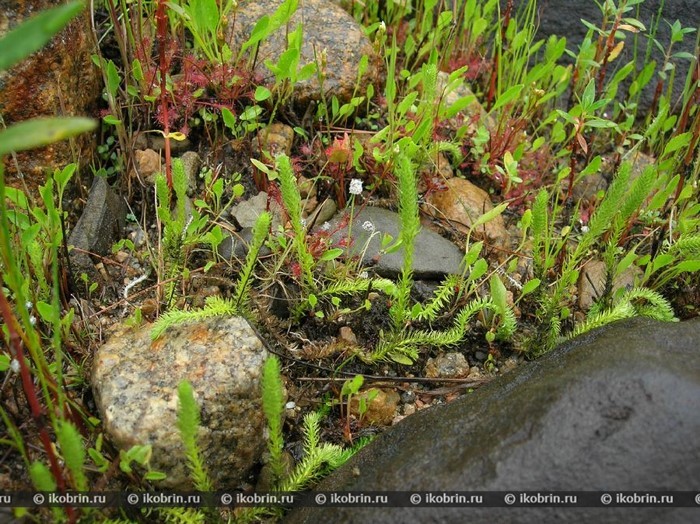 International importance:
It is included in the 2nd edition of the Red List of Belarus (1993). It is protected in Latvia, Lithuania, Ukraine and Poland.

Distribution:
The area covers Europe (in the form of islands and exclaves, generally within a forest zone), the Western and Eastern Siberia, the Far East, Japan, the Azores and North America (in the West and the East). Relic, by origin the boreal Atlantic and European look which is in Belarus in separate localities and island sites of growth within the general disjunctive area. The majority of locations of a look in the republic is dated for sandy zandrovy and secondary water and glacial landscapes of the Belarusian Polesia, the central and east regions Predpolesya, is more rare in the Belarusian Poozerye, on the most part of the Grodno and Minsk regions as it does not grow in regions with a sublime relief, in particular, on the heights which are a part of the Belarusian ridge and to the territories adjoining to them, and also regional glacial formations of Belarusian Poozerya. It is known in Gomel, Elsky, Zhitkovichsky, Zhlobinsky, Kalinkovichsky, Lelchitsky, October, for Svetlogorsk, Mazyr, Recyca, on border of Hoyniksky and Braginsky districts of the Gomel Region; in Berezovsky, Brest Kobrinsk, Maloritsk, Pinsk, Pruzhansky, Stolinsky districts of the Brest Region; on Ivyevsky's border (The Grodno Region) and Volozhinsky (The Minsk Region) districts; in Belynichsky, Babruysk, Glussky, Klimovichsky, Klichevsky, Kirov, Kostyukovichsky, Krasnopolsky, Krichevsky, Osipovichsky, Slavgorod, Hotimsky, Cherikovsky districts of the Mogilev Region; in Vitebsk, Gorodoksky, Dokshitsky, Lepelsky, Polotsk, Rossonsky, Sennenskom, Sharkovshchinsky, Shumilinsky districts of the Vitebsk Region; in the Grodno and Svislochsky districts of the Grodno Region; in the Dzerzhinsk, Kletsky, Logoysky and Minsk districts of the Minsk region. According to old gerbarny and literary data it was noted in the Luninetsky district of the Brest Region, Novogrudsky and Smorgonsky districts of the Grodno Region, Loyevsky district of the Gomel Region, in the former Mogilev province.

Habitats:
Ecologically rather uzkoplastichny (stenotopny) look which adapted to the specific edafotopa poor in nutrients, and to the rarefied fitotsenoza. Grows on dampish exposures among oligotrofny and mezotrofny bogs, it is frequent at footpaths and roads, on the becoming boggy and growing dredging at various roads and on high voltage line strips, at the bottom of old pits (mainly sand-gravel), on coast of ponds, ditches and lakes, is frequent in communities with types of a sort cuckoo lyon, a rare bush and self-sowing of a pine and a birch. Usually grows on sour cespitose and podsolic sandy, sandy and loamy ogleenny soils with the constant mode of moistening. The top part of a substratum has to be with fine-grain waterproof particles.

Biology:
Sporonosit from July to September, a sporonosheniye plentiful. Anemokhor and hydrochorus. Disputes sprout only in the presence of a damp naked substratum. Breeds disputes and vegetativno (forms special additional kidneys on tops of branches which winter, and everyone at dying off of the main vegetative escape gives a new plant in the spring). Reaches puberty only in several years. Vegetative kidneys always damp and at death of the main escape during the droughty period long keep viability. There is an instruction on presence at a type of a mikoriza.

Number and tendency of its change:
In the republic more than 70 populations of a look are known, and the most part from them was revealed thanks to careful searches in suitable ecotops in recent years. Look number sharply fluctuates depending on climatic conditions and the hydrological mode of the past and present vegetative periods year by year. Grows absent-mindedly on the limited square; under favorable conditions can appear in weight, however in process of development of a grass cover, secondary flood or in connection with a negative combination of climatic and hydrological indicators for a row of years abundance the plaunochka sharply decreases, up to a total disappearance. Is a slabokonkurentosposobny look.

Major factors of threat:
The main - anthropogenous: the hydromeliorative works leading to fluctuations of level of ground waters, peatery, road and repair construction, secondary development of pits, pasturage of cattle, radical transformation of lands. Additional – replacement by more competitive types, negative combinations of climatic and hydrological indicators for a row of years.

Protection measures:
"Bialowieza Forest", a number of the existing wildlife areas grows in the Brest, Vitebsk, Gomel and Mogilev Region, and also the designed wildlife areas in the Babruysk, Gorodoksky, Kletsky, Polotsk and Pruzhansky districts in territories of the Polesia radiation and ecological reserve, the Berezinsky biospheric reserve, national parks "Pripyat" also. In places of growth it is necessary to forbid all types of hydromeliorative works, peatery, secondary development of pits, to limit road repair work (only the clearing of wood and shrubby vegetation is admissible), to limit pasturage of cattle, to support the existing ecological mode and, first of all, the moistening mode. To periodically carry out audit and ecological and biological control of a condition of the known populations. To carry out search of new locations.