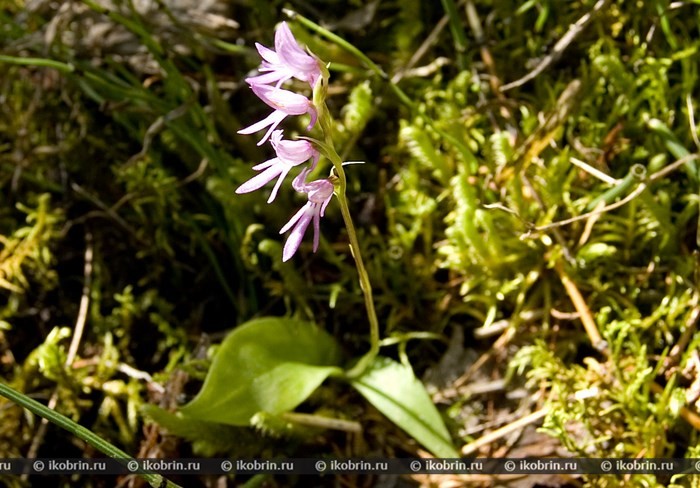 International importance:
Under the state protection in the republic it is taken for the first time in 1964. It is included in the Red List of Belarus of the 1st and 2nd editions (1981, 1993). It is protected in Latvia, Lithuania, Ukraine and Poland. It is included in the Appendix II to the Convention SITES.

Description:
Perennial grassy plant with spherical whitish-gray tubers. The stalk 10-20 cm high, thin, ridge, at the basis with two unequal leaves which are often lying on a surface of a forest laying is available 1-3 small uzkolantsetny leaflets above. Flowers small, purple-red, seldom white, are collected till 6-24 in a rare one-sided ear. The lip is three-blade, with wider and long average blade, shporets curved and is directed forward, on the end reinforced. A fruit - a dry box with very small numerous seeds.

Habitats:
Grows in old-age pine and mixed (pine and birch with a fir-tree, pine and oak) the woods of mossy and orlyakovy types, often near the rivers and lakes. Meets on soils of various mechanical structure and fertility, but is more often on sandy and sandy soils. Prefers sites with well developed moss cover and not dense herbage. The root system is superficially in the soil therefore the plant is exacting to humidity of air and a laying.

Number and tendency of its change:
In the majority of the known locations the number of a look is small: usually is from one to several plants, about several tens vegetative and generative individuals are rare. The largest populations are revealed in Cherikovsky district (vicinities of. Tanks), Pruzhansk (vicinities of. Salmons) and Molodechnensk (vicinity of Zaskovichi) districts; in them from 40 to 100 individuals are marked out. The condition of the majority of other populations can be estimated as critical; in a number of earlier known locations the look repeatedly is not found (The Minsk district). The number of populations fluctuates by years that is connected with ability of individuals of family yatryshnikovy under adverse living conditions to pass into a condition of secondary rest.

Protection measures:
The "Braslau Lakes" and "Bialowieza Forest", "Baranovichsky", "Stronga", "Buda-Koshelevsky" grows in wildlife areas of "Vygonoshchanskoye", in territories of national parks. It is necessary to forbid in places of growth cabins of the main use (also the cabins of leaving which are carried out to the winter period are admissible selective sanitary) and application in surrounding territories of toxic chemicals, to limit recreational loadings, not to allow wildfires. In Cherikovsky district the organization of the biological wildlife area as here the look grows in a complex with other rare species of plants is necessary. It is necessary to carry out periodically audit and ecological and biological control of a condition of izvestyony populations, to carry out search of new mestoyonakhozhdeniye.