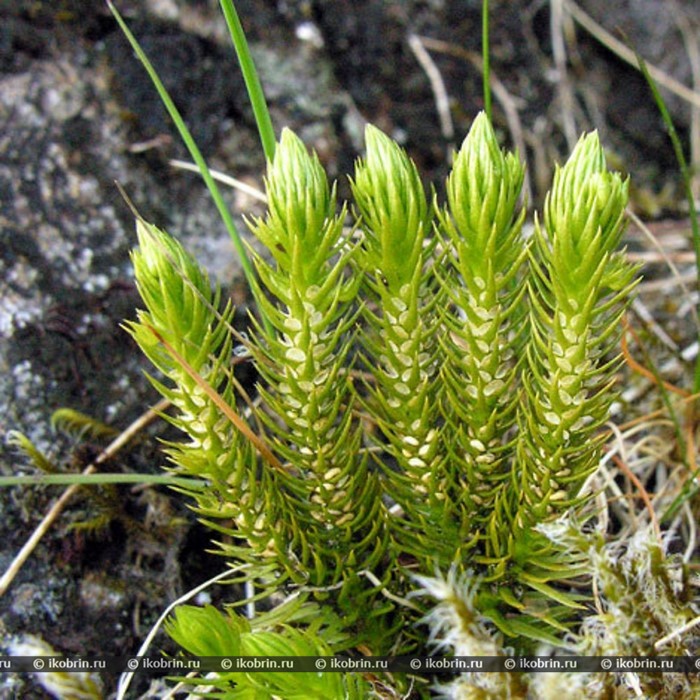 International importance:
It is included in the 1st and 2nd editions of the Red List of Belarus (1981, 1993). It is protected in Lithuania, Latvia, the Smolensk region to Russia and Ukraine.

Description:
Perennial evergreen plant with a short rhizome and the ascending densely oblistvenny escapes 10-20 cm high. The stalk which is dichotomizing branching. Leaves are uzkolantsetny, smooth-edged or at a top slabozubchaty, pressed or slightly unbent, are located on a spiral. A sporangium is yellowish, stalk tops are placed on one in bosoms of sporophyls slightly lower; strobila are absent.

Rasprostraniyeniye:
Forest and forest-tundra zones of both hemispheres, Caucasus, mountains of Central Asia. Relic, by origin the boreal and taiga look which is in Belarus near the southern border of an area which passes a little to the north of the river Pripyat. To the South from it the single isolated locations are known only; in other territory the look meets quite often, but in extremely insignificant quantities. It is noted within all territory of the Vitebsk, Grodno and Minsk Region, it is single in the Brest and Gomel Region, some districts of the Mogilev Region.

Number and tendency of its change:
Grows at more or less dense, scattered on forest area curtains which area usually 0,2-0,5 sq.m, seldom more than one square meter (in Pruzhansky district curtains with a diameter of 2,2 m are revealed). Because in a year the plant accrues on only 2-3 cm, the curtain can reach the considerable sizes only in 20-40 years at continuous insignificant illumination and moderate moistening of a habitat. At the full lighting resulting from continuous cabins quickly disappears. Its existence in many locations repeatedly was confirmed in recent years, in some - no (in the Brest, Logoysky, Novogrudsky and Smolevichsky districts).

Major factors of threat:
The violation of the light and hydrological modes in places of growth resulting from carrying out cabins of the main use, drying and meliorative works, laying of roads and other types of economic land development. In recent years suffers from unlimited collecting by the population for the medicinal purposes.

Protection measures:
Is under protection in all national parks, the Berezinsky biospheric reserve, a number of the wildlife areas located mainly in the North and in the central part of the republic. Periodic control of a condition of populations is necessary for prevention in places of growth of baranets of negative anthropogenous impacts (the selective sanitary cabins and cabins of leaving which are carried out to the winter period are allowed).