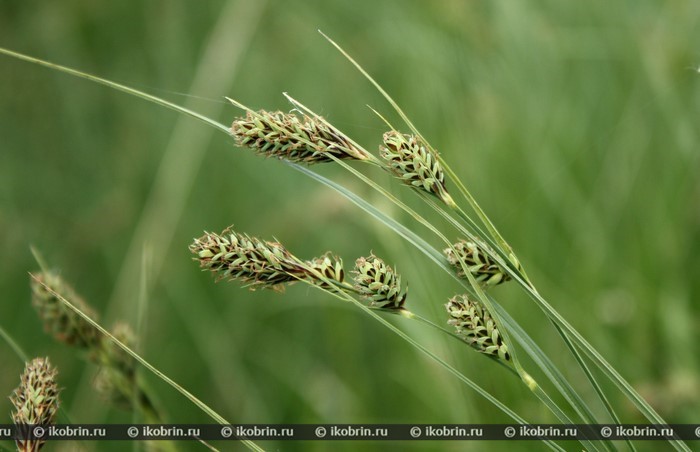 International importance:
It is included in the 2nd edition of the Red List of Belarus (1993). It is protected in Ukraine, Lithuania and Latvia.

Description:
Perennial grassy dlinnokornevishchny gray-green plant. Stalks 50-60 cm high, at the basis are surrounded with reddish-purple scale-like leaves with mesh and fibrous disintegration. Median leaves are shorter than a stalk, hardish. Cones (3-5) are direct: top - club-shaped, in the top part with pestichny, and in lower - with tychinochny flowers; lateral ovoid, pestichny. Covering scales along an average vein are covered with nipples. Sacks are elliptic, greenish-whitish, with a shirokovyemchato-two-gear nose.

Rasprostraniyeniye:
Scandinavia, Atlantic, Central and Eastern Europe, Mediterranean, Caucasus (Ciscaucasia), Eastern and Western Siberia, Central Asia (Kazakhstan), North America. In Belarus is in the separate isolated localities within an extensive golarktichesky area. It is authentically known since the beginning of the 30th years of last century (Minsk). In the next years it was noted in Vileysky, Pruzhansky, Recyca and Soligorsk districts. In the last decade regional gathered only in Gluboksky district of the Vitebsk Region and Vileysky district Minsk.

Number and tendency of its change:
So far the condition of two populations is authentically known: in Gluboksky district the area of population makes several tens square meters, in Vileyyosky - more than 1 hectare. The condition of other locations is unknown; population in Minsk is destroyed as a result of building of the city.

Major factors of threat:
Change of the hydrological mode of habitats as a result of carrying out drying melioration and peatery, overgrowing of ecotops a bush and subgrowth of tree species.

Protection measures:
Grows in territories of National park "Bialowieza Forest", the designed wildlife area of "Mylichino" (Gluboksky district). It is grown up in the Botanical garden of the Vitebsk university. Periodic control of a condition of the known populations and search of new places of growth, the organization of botanical wildlife areas in places of growth (in Vileysky district), prevention of anthropogenous influences, carrying out purposeful optimization of habitats are necessary (periodic clearing from wood and shrubby breeds).