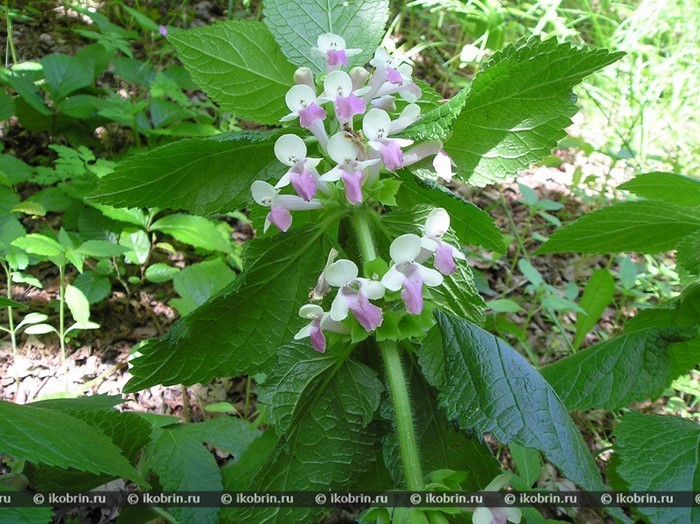 International importance:
Under the state protection in the republic it is for the first time taken in 1964. It is included in the Red List of Belarus of the 1st and 2nd editions (1981, 1993). It is protected in Lithuania and Poland.

Description:
Perennial grassy plant with a short rhizome. The stalk is upright, tetrahedral, myagkoopushenny (65) cm 20-45 high. Leaves are petiolar, opposite, large, elliptic, on edge gorodchato-pilchaty. Flowers large, dvuguby, white-pink, with a crimson spot in a pharynx, are collected on 2-6 in bosoms of the top leaves. A fruit - a dry four-nutlet.

Rasprostraniyeniye:
The main part of an area covers mountainous and flat areas of Central and Southern Europe. Its east edge comes into the western Areas of East European Plain including on the territory of Belarus where the censer Sarmatian is in separate localities of growth on northeast border of an area. This relic, by origin the drevne-Mediterranean not moral look is found in Baranovichskom, Berezovsky, Brest, Ivatsevichsky, Kamenetsky, Kobrin, Maloritsky, Pruzhansk, Stolinsk, Pinsk and the Districts of Ivanovskoye of the Brest Region, Volkovyssky, Grodno, Zelvenyosky, Mostovsky, Slonimsky and Svislochsky districts of the Grodno Region, Lelchitsky and Mazyr districts of the Gomel Region. The most northern location is located in the Minsk district of the Minsk Region, the location on the Mazyr height is most advanced on the East. Earlier it was noted in vicinities of Slutsk, Mazyr, Pinsk, Brest, Slonim, Grodno and in Bialowieza Forest.

Biology:
Blossoms from the middle of May to the middle of June. Entomofil. Seeds ripen in the second half of June - the beginning of July. In natural populations breeds only seeds. Barokhor.

Number and tendency of its change:
Populations occupy the spaces from several tens square meters to several hectares, individuals meet is single or small groups. The generative (blossoming) plants odnopobegovy (2-4-pobegovye is rare), them in populations no more than 30%. For the last 30 years the level of viability of populations determined by the occupied space, number, an age (ontogenetichesky) range, and also power and seed efficiency of individuals considerably decreased. In culture a look vysokoustoychiv. At cultivation more than 15 years can grow in favorable conditions on one place without change. Individuals considerably increase vegetative weight, plentifully blossom and form rather large number of well sprouting seeds. Make multiple copies seeds and division of a bush.

Major factors of threat:
Defining - anthropogenous: intensive mass collecting plants as medicinal and pryanoaromatichesky raw materials, cabin of the wood of the main use.

Protection measures:
"Bugsky", "Buslovka", "Vorokhovo", "Vydrenka", "High", "the Divin-Veliky wood", "Wild", "Dolbnevo", "The castle wood", "Zavishye", "Konchitsa", "Medukhovo", "Obrovo", "Popelevo", "Strelyyosky", "Stupskoye", "Trostyanitsa", "Hmelevka" and others grows in territories of National park "Bialowieza Forest", wildlife areas. It is grown up in botanical gardens NAN of Belarus, BGU and the Vitebsk university, in the Republican ecological center of pupils and youth (Minsk). In places of growth of a censer Sarmatian it is necessary to forbid cabins of the wood of the main use; to carry out the main timber actions (selective sanitary cabins and cabins of leaving) to winter time at establishment of steady snow cover taking into account preservation of a density of kroner of a wood and shrubby tier at the level of 40-70%; to periodically carry out audit and ecological and biological control of a condition of the known populations; to carry out search of new locations; to recommend to the interested enterprises and the population to grow up a censer Sarmatian in the conditions of culture as a medicinal, pryanoaromatichesky, melliferous and ornamental plant.