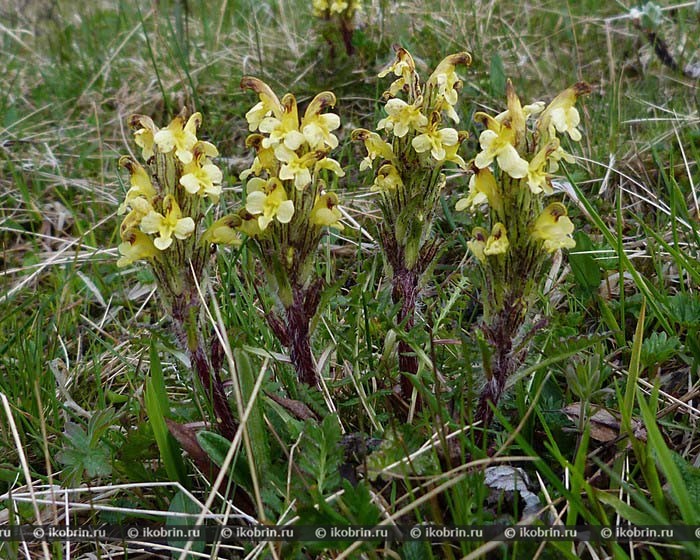 International importance:
It is included in the Red List of Belarus of the 2nd edition (1993). Is under the state protection in Lithuania, Latvia and Ukraine.

Description:
Perennial grassy plant with an upright stalk up to 120 cm high. Leaves are located mainly in the lower part of a stalk, simple, oblong and elliptic or oblong, peristorazdelny or peristorassechenny, up to 20 cm long. Flowers yellowish, 3-3,5 cm long, dvuguby, with a lower lip, reddish at a top, are collected in an inflorescence a brush. A fruit - a roundish box.

Number and tendency of its change:
Grows mainly small groups and single individuals, occasionally in places of growth has high number (in Drogichinsky and Kobrin districts). In some locations known earlier (in Brest, Minsk, vicinities of the Lake Narach, etc.) disappeared.

Major factors of threat:
Mainly anthropogenous: okulturivaniye of meadows (use of fertilizers and herbicides, grass burning out, etc.), violation of the water mode of the rivers and bogs, drying and meliorative works, early mowing, cattle pasture, recreational loadings, collecting of plants.

Protection measures:
It is protected in territories of the Berezinyosky biospheric reserve, national parks "Bialowieza Forest", "Pripyat", "Narochansky", biological wildlife areas of "Buslovk" (Berezovsky the district) and "Zvanets" (Drogichinsky district), etc. Strict observance of the mode of protection in reserved territories, prohibition of economic activity in all authentically known places of growth (except late mowing), the organization of specialized wildlife areas in places of mass growth, control of a condition of the known populations, audit of earlier known locations and literary instructions, purposeful search of new habitats is necessary. It is necessary to find out a possibility of artificial moving of a look in suitable natural ecotops.