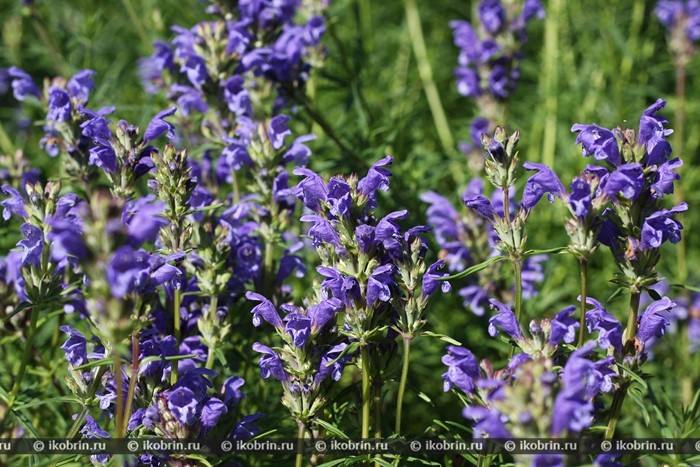 International importance:
It is included in the Red List of Belarus of the 2nd edition (1993). It is protected in Lithuania, Latvia and Poland. It is entered in the Appendix I to the Bern convention.

Description:
Perennial grassy plant up to 60 cm high with a short branched rhizome and several upright shortly hairy (mainly under knots) or almost naked stalks. Leaves are opposite, smooth-edged, lantsetno-linear or linear, with the edges wrapped down, lower on short scapes, other sedentary, from above dark green, from below more pale, with the acting median vein. Flowers large, on short pedicels in bosoms of pritsvetny leaves, in 6-floral false verticils which form an oblong clustery inflorescence 2-6 cm long on a stalk top. The cup which is shortly trimmed, not clearly dvuguby. The nimbus is srostnolepestny, dvuguby, cups, violet-blue or dark-blue, seldom pink are three times longer. Fruits - nutlets, ovoid, not clearly trihedral, dark-brown, smooth.

Number and tendency of its change:
Grows at separate copies and small groups, sometimes forms quite considerable populations. For example, the population revealed in 2001 (The Recyca district, vicinities of of Kopan) occupied the space equal to 0,6 hectares and contained about 400 uneven-age individuals from whom more than a half were blossoming.

Major factors of threat:
Anthropogenous: economic transformations of lands, the cabin and skidding of the wood, a cattle repasture, bevelling, excessive recreational loadings (collecting the blossoming plants and trampling). Natural: the natural changes of vegetation which are followed by excessive growth of wood and shrubby breeds and a high zadernovannost of habitats.

Protection measures:
"Bialowieza Forest" and "Narochansky", biological wildlife areas "Buda-Koshelevsky" (Buda-Koshelevsky district) and "Glebkovka" (The Minsk district) grows in territories of the Berezinsky biospheric reserve, national parks. It is cultivated in the Central botanical garden NAN of Belarus, botanical gardens BGU and the Vitebsk university. Periodic control of a condition of the known populations, search of new locations and, if necessary, the organization of their protection, the prevention in places of growth of negative anthropogenous impacts, implementation of the main timber actions (selective sanitary and cabins of leaving) in winter time, periodic clarification of habitats are necessary. Broad introduction of a look to culture as an ornamental plant is recommended.