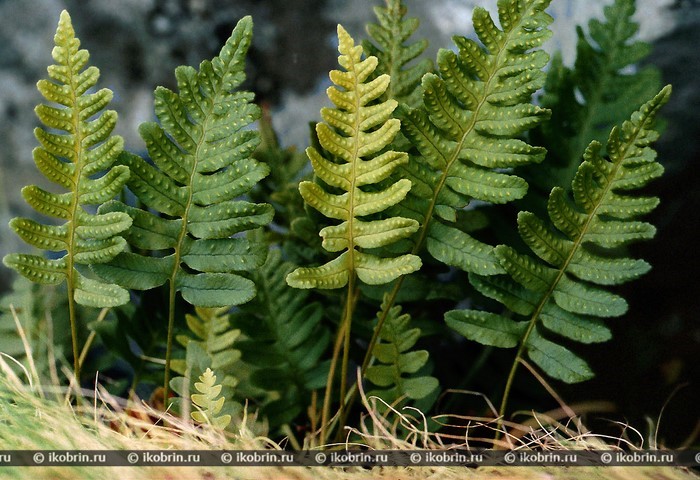 International importance:
It is brought in the Red List of Belarus of the 1st and 2nd editions (1981, 1993). It is protected in Poland.

Description:
Perennial grassy plant 20-40 cm high with the long creeping, often elevated, densely covered with brown films rhizome on which in 2 rows almost leathery vay (leaves) are located. Vi's plate plumose rassechennaya, in an outline oblong, pointed; segments are oblong and linear, smooth-edged or slightly pilchaty, gradually decreasing from the basis to a top; the lower couple sometimes with ears at the basis. Sorusa are on the lower party of Vi, roundish, very large, are placed in the middle between edge of a segment and an average vein.

Distribution:
Caucasus, Europe, Asia and Central Asia, Western Siberia, North America. It is quite widespread mainly in mountainous areas of a moderate zone of the northern hemisphere. This relic, by origin the boreal mountain and forest look, in the territory of Belarus is on eastern frontier of the European fragment of an area. The majority of the known locations are located in the western part of the republic in Grodno (The Grodno, Zelvensky, Mostovsky, Ostrovetsky and Svislochsky districts) and Brest (Baranovichsky, Brest, Ivatsevichsky, Maloritsky, Pruzhansky and Stolinsky districts) areas. In Minsk (Borisovsky, Vileysky, Volozhinsky, Myadelsky and Stolbtsovsky districts), Gomel (The Gomel, Recyca and Mazyr districts), Mogilev (Osipovichsky district) and Vitebsk (Lepelsky district) areas single locations are revealed. According to literary data grew in Bialowieza Forest, Borisovsky district of the Minsk Region (page. Mstizh), in vicinities of Minsk and in the Mogilev province.

Habitats:
Meets on the upper edge of slopes in valleys of the rivers and hollows of lakes, on sandy and sandy soil exposures, and also in the mixed, pine and fir-tree and broad-leaved woods where settles on stubs, the tumbled-down trunks of trees and mossy boulders.

Number and tendency of its change:
Usually grows at groups, occasionally quite considerable. Absent-mindedly groups meets on the area up to 1 hectare.

Major factors of threat:
All views of cabins of the wood, economic transformation of lands. A number of populations of a look is in the places attractive to rest of the population therefore their disappearance is possible as a result of construction of recreation facilities and dachas.

Protection measures:
"Bialowieza Forest" and "Narochansky", the Berezinsky biospheric reserve, wildlife areas "Big Yaminets", "Bugsky", "Vygonoshchanskoye", "Gozhevsky", "Wild", "Zvonets", "Ozera", "Pribuzhsky Polesia", "Sopotskinsky", "Strelsky", "Terebezhovo-Kolodnyansky" and others grows on territoriiya of national parks. It is grown up in a botanical garden of the Vitebsk university and in the Republican ecological center of pupils and youth (Minsk). It is necessary to prevent negative anthropogenous impacts in places of growth; to exercise control of a condition of the known populations and purposeful search of new; it is recommended to use in decorative gardening for landing in a shadow of stones.