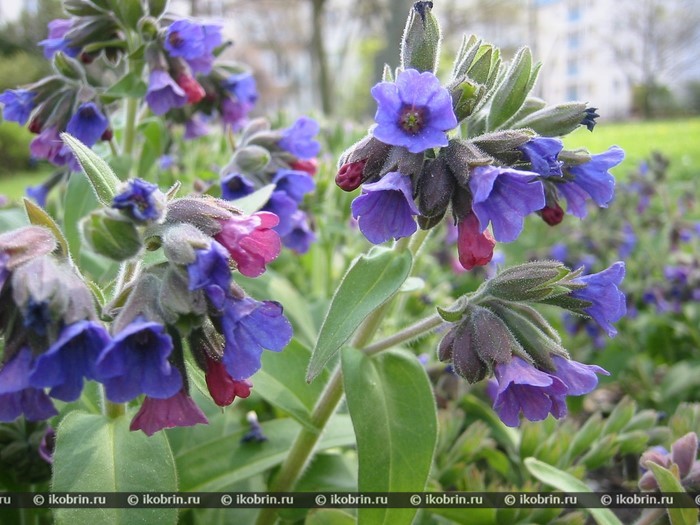 International importance:
It is included in the Red List of Belarus of the 2nd edition (1993).

Description:
Perennial grassy plant with an upright stalk 20-40 cm high and a short rhizome, sticky from ferruterous hairs, in the top part with a bunch of shnurovidny additional roots. Radical leaves large, shirokolantsetno-ovoid, korotkozaostrenny, gradually narrowed in a winged scape; stem - oblong, with the polustebleobjemlyushchy basis, many times over already well radical; the top party of leaves in places ferruterous, lower - barkhatisto trimmed, lighter. Flowers oboyepoly, correct, with a blue-violet funnel-shaped nimbus, are collected in quite dense curls. The dried fruit which is breaking up to 4 almost naked ovoid nutlets.

Rasprostraniyeniye:
The general area of a look (by origin boreal and subtaiga) is divided into two large fragments: the Central European, covering Germany, Poland, Romania, Hungary, the North of the Balkan Peninsula, forest-steppe regions of the European part of the former USSR - to Dnieper, and the Siberian, borrowing southern areas of the Western and Eastern Siberia and the northern regions of Mongolia; the separate exclave is available in the Caucasus. In Belarus the look is in the isolated localities behind northern border of the European fragment of an area. It is revealed in Brest (the Kamenetsky district), Grodno (Volkovyssky, Grodno and Oshmyansky districts) and Minsk (Volozhinsky and Minyosky districts) areas. There is an instruction that earlier the look was noted in vicinities Mogilev.

Habitats:
The broad-leaved, coniferous and coniferous and broad-leaved forests mainly on vskholmleniye, secondary birch forests on the place of the fir-tree and broad-leaved woods. Prefers places quite light moderately dry rich with mineral substances. Because the summer shortened vegetative escapes of a medunitsa replacing generative in the period of a full oblistvleniye of trees, a tenevynosliva it can be met also in quite shaded wood sites.

Biology:
Blossoms in April - May, fructifies in May - the beginning of June. The phenomenon of a geterostiliya interferes with self-pollination of flowers. Pollination happens to the help of dlinnokhobotkovy insects (entomofit). Under natural conditions breeds mainly seeds. Barokhor; distribution of seeds on small distances is carried out by ants. Seasonal change of age structure of populations is characteristic of this look: in April - the beginning of May there are no sprouts and juvenile plants which appear at the end of May - June.

Number and tendency of its change:
The most part of populations of a look occupies rather small spaces: from several tens square meters to 1 hectare. Number in them does not exceed 150-200 plants. In the most numerous population (in vicinities of of the item of Oshmyana of the Grodno Region) stretched lengthways the river of Oshmyanki in 1992 there were about 1000 plants of a different ontogenetichesky age state. Long-term supervision (more than 10 years) over populations in the Minsk and Volozhinsky districts revealed year fluctuations of number of the individuals who are (especially blossoming) depending on weather climatic conditions. In culture the look vysokoustoychiv, gives plentiful self-sowing. Well aerated fertile damp soils well influence the general gabitus of plants. The number of generative escapes at one plant can reach 86 pieces (in the nature 1-3, it is rare 4-7). Small shading, loosening of the soil, weeding is recommended. Breeds division of rhizomes and crops of seeds (usually towards the winter).

Protection measures:
Grows in the territory of National park "Bialowieza Forest", the biological wildlife area "Castle wood" (Volkovyssky district) and the botanical wildlife area "Ivenchuk" (Volozhinsky district). It is grown up in the Central botanical garden NAN of Belarus and on a site in the Republican ecological center of pupils and youth (Minsk). It is necessary to carry out periodically audit and ecological and biological control of a condition of the known populations, to carry out search of new locations and, if necessary, to organize their protection (the organization of wildlife areas in Oshmyansky and Minsk districts is necessary now). In places of growth it is necessary to forbid first of all cabins of the wood of the main use, the main timber actions (selective sanitary cabins and cabins of leaving) need to be carried out to winter time at establishment of steady snow cover. It is recommended to the interested enterprises and the population to grow up a medunitsa as an early-flowering flower and decorative, medicinal, melliferous and food plant.