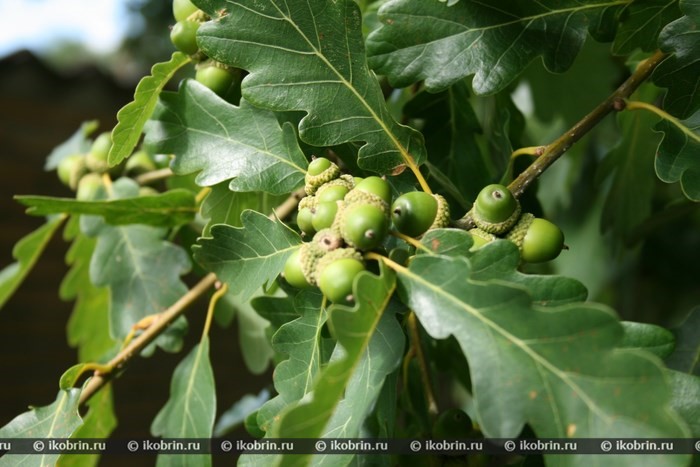 International importance:
It is included in the Red List of Belarus of the 1st and 2nd editions (1981, 1993). It is protected in Lithuania.

Description:
Tree 30 m high and more, with the dark cracking bark and red-brown escapes. A sheet plate with 5-7 pairs of unequal blades (the longest in the middle of a plate). Pestichny flowers and fruits on 1-5, are more often on 2-3, sitting on very short fruit stems. A fruit - the odnosemyanny nut with a firm okoloplodnik (acorn) 1,5-2,5 cm long surrounded at 1/2-1/3 lengths with a cup-shaped cupule.

Rasprostraniyeniye:
Relic, by origin the Central European mountain look widespread in Scandinavia, the Central and Atlantic Europe, the western areas of Eastern Europe, the Mediterranean, the Crimea, in the North Caucasus. In Belarus is in island sites behind eastern frontier of an area. Under natural conditions grows only in Bialowieza Forest, according to the latest data in thirty of its quarters. Earlier it was brought for vicinities of the Lake Svityaz in Novogrudsky district of the Grodno Region, however these data are not confirmed by researches of the last decades.

Biology:
Blossoms in April - May. Anemofil. Fructifies in July - September. Reproduction is seed. Barokhor. Distribution of acorns can be carried out by wind (if it is rather strong), but mainly animals (birds, rodents).

Number and tendency of its change:
Grows at separate copies and small, places considerable groups. Forms both pure plantings, and mixed with an oak chereshchaty and a hornbeam. According to the latest literary data for 44 years of supervision in Bialowieza Forest in the first tier 38% of trees of an oak rocky dropped out, in the II tier the look completely dropped out of structure of a forest stand. Studying of renewal of an oak rocky in an oak grove kislichny, carried out in the Belovezhyosky dense forest since 1973, allowed to establish that under bed curtains it does not renew

Major factors of threat:
Lack of renewal of an oak rocky in Bialowieza Forest is connected with high completeness of a forest stand and high density of wild hoofed animals which destroy acorns and subgrowth.

Protection measures:
It is protected in National park "Bialowieza Forest". Grows in the territory of Gluboksky forestry, in Budslavsky and Vidzylovchinsky parks. Regulation of number of hoofed animals, enclosing of separate sites for the purpose of subgrowth preservation is necessary; broader cultivation of a look in forestries and parks is recommended.