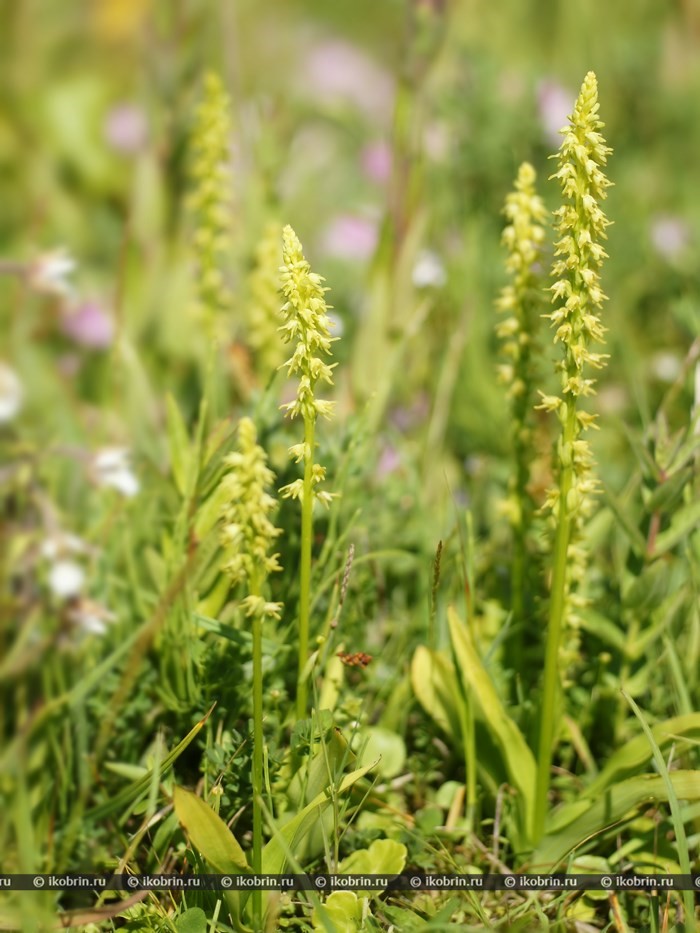 International importance:
It is brought in the Red List of Belarus of the 2nd edition (1993). It is protected in Ukraine, the Smolensk Region of Russia, Lithuania, Latvia and Poland. It is included in the Appendix II to the Convention SITES.

Description:
Perennial grassy plant with small roundish usually single tuber. A stalk 8-25 cm high, at the basis with two (seldom three) lantsetny or oblong and ovoid sedentary leaves up to 10 cm long. Flowers small, yellowish-green, with a pungent honey smell, are collected in a multiflowered kolosovidny inflorescence. Leaflets of an okolotsvetnik kolokolchato are put. The lip is three-blade; blades are linear, stupid, average is twice longer than lateral; shporets is short, meshkovidny. The ovary is sedentary, twisted. A fruit - a dry box with numerous small seeds.

Rasprostraniyeniye:
The general area of a look consists of the Western European, Scandinavian and East European-Siberian fragments. Separate exclaves are available in the south of Great Britain, on the Balkans, the Caucasus, Tibet, Tien Shan, in the Carpathians and the Himalayas, in the east of China and Japan. Relic, by origin the subtaiga mountain look which is in Belarus on the western border East European-Siberian and behind eastern frontier Western European area fragments. It is authentically known in Verkhnedvinskom (on the island of Lake Osveya), Lepelsk (Berezinsky biospheric reserve) and Polotsk districts of the Vitebsk Region, in Pruzhansky district of the Brest Region (Bialowieza Forest) and Braginsky district of the Gomel Region. According to literary data it was noted in the Slutsk district of the Minsk Region, in the Mogilev Region (without exact indication of locations) and in Novogrudsky district Grodno regional.

Number and tendency of its change:
Meets single copies and small groups on very limited squares.

Major factors of threat:
Drying and meliorative and construction works, okulturivany meadows with use of fertilizers and toxic chemicals, excessive recreational loadings (trampling) and pasturage of cattle.

Protection measures:
Grows in territories of National park "Bialowieza Forest", the Berezinsky biospheric reserve, the landscape wildlife area "Osveysky" (Verkhyonedvinsky district). Purposeful search of new locations of a look, a constant control of a state and studying of dynamics of number of the known populations, the organization of protection of all places of growth with prohibition in places of growth of anthropogenous influences, studying of opportunities and features of cultivation of a brovnik in culture are necessary.