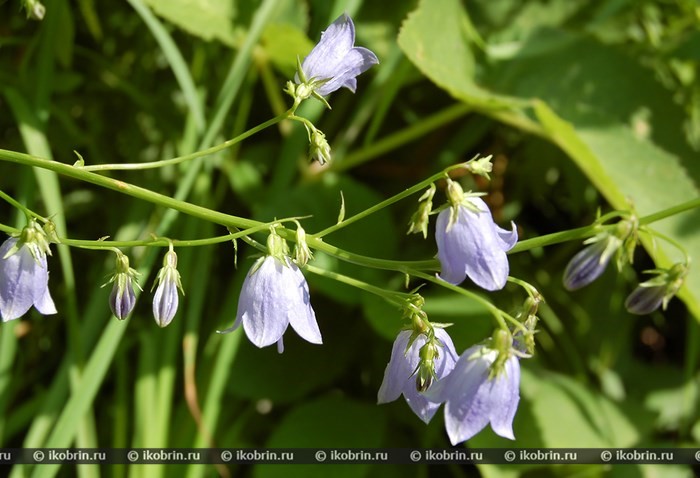 International importance:
It is included in the Red List of Belarus of the 1st and 2nd editions (1981, 1993). It is protected in the Smolensk Region of Russia and Poland. It is brought in the Appendix II to the Directive of the European Union on habitats.

Description:
Perennial grassy plant with a spindle-shaped thick root and a strong, direct, gustoolistvenny ridge stalk 50-120 cm high. Leaves are next, spiralno located on a stalk, pilovidno-gear; in the lower part of a stalk oblong and ovoid or elliptic, petiolar, in average - narrower, in top - sedentary, lantsetny. Flowers are collected in a multiflowered pyramidal whisk, hanging. The nimbus is kolokolchaty, light blue or light violet, seldom white. The column is longer than a nimbus and is exposed from it. A fruit - an obratnogrushevidny dry box.

Rasprostraniyeniye:
Europe (except northern areas), Western Siberia, Central Asia (the North, including Kazakhstan). In Belarus this the look forest-steppe by origin is in separate localities and ostrovyony sites of growth behind northern border of an area. The majority of the known locations are located in the Gomel Region (Kalinkovichsky, Loyevsky, Mazyr, Recyca districts), single - in Grodno (The Grodno district) and Brest (Kamenetsky and Pruzhansky districts). Earlier it was specified for vicinities of Grodno, Loyev, Nova Iolchi (Braginsky district), in Bialowieza Forest and the Mogilev province. The last instruction was incorrectly concretized further: vicinities Mogilev. The first literary data on growth of a jingle in Belarus belong to 1781 and concern location in vicinities of Grodno.

Number and tendency of its change:
Meets mainly separate individuals or small groups (6-30 plants) on limited squares (100-300 sq.m). In 2001 in the Recyca district on left-bank part of the Dnieper River with fragments of the degraded oak groves the new location of a jingle is revealed; this local population occupies the total area of 4-5 hectares, density of individuals in congestions in places reaches 20 pieces on square meter (including an individual of all ontogenetichesky age states). At a favorable ecological situation the look can remain on one place long enough (till 100 years). At the same time from four known earlier in Bialowieza Forest of habitats of a look only one so far remained and that in critical condition.

Major factors of threat:
Anthropogenous and zoogene: drying and meliorative works, economic use of inundated lands (deforestation with transformation of lands, mowing, a cattle pasture, a raskorchevka of bushes, plowing), excessive recreational loadings (trampling, collecting the blossoming plants), an excess press of wild animals (in Bialowieza Forest). Natural: the natural change of vegetation which is followed by growth of a wood tier owing to what the light mode of habitats changes.

Protection measures:
Grows in the territory of National park "Bialowieza Forest" and the biological wildlife area "Dnepro-Sozhsky" (Loyevsky district). It is grown up in the Central botanical garden NAN of Belarus, Botanical garden BGU and in the Republican ecological center of pupils and youth (Minsk). Audit of the known locations and periodic control of a condition of populations, the prevention of economic transformation of lands and change of the hydrological mode in places of growth, target optimization of habitats are necessary (clarification); the organization of wildlife areas in the location of the most numerous population in the Recyca district and for protection of a complex of rare species - in the Mazyr district; broader introduction of a look to culture as an ornamental, medicinal and melliferous plant (there are examples of cultivation on personal plots), its repatriation in natural ecotops is recommended.