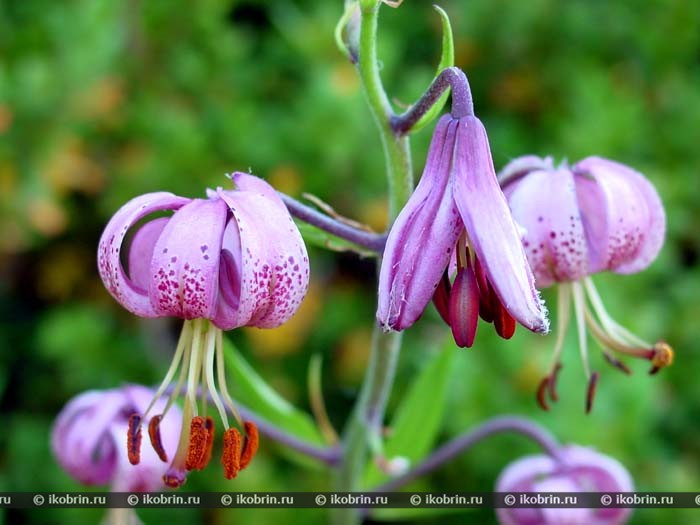 International importance:
It is included in 1964 in the list of the protected plants and the 1st and 2nd editions of the Red List of Belarus (1981, 1993). It is protected in Ukraine and Poland.

Description:
Perennial grassy plant with a golden-yellow scaly bulb and an upright olistvenny stalk 30-120 cm high. Leaves are shirokolantsetny, in a middle part of a stalk are collected on 6-8 (10) in a false verticil, in top - next. Flowers large, hanging, in a top rare brush. Okolotsvetnik with 6 the unbent leaflets, dirty-pink with dark stains, oblong dugoobrazno. A fruit - a mnogosemyanny six-sided obratnoyaytsevidny box.

Habitats:
The broad-leaved and coniferous and broad-leaved woods, are more rare pine forests and fir groves with a filbert in an underbrush, occasionally small-leaved (birch forests, aspen forests) and the mixed pine and birch woods. Typical forest mezofit, preferring a penumbra and soils rich with a humus.

Biology:
Blossoms at the end of June - July, fructifies in August - September. Entomofil (it is pollinated by insects), self-pollination is possible. Reproduction seed and vegetative (in natural fitotsenoza reproduction is noted by scales of bulbs). Ballistas.

Number and tendency of its change:
Usually grows at small groups or separate copies, places (in the Grodno and Brest districts) forms considerable on the area and number of population. In the conditions of the Berezinsky biospheric reserve usually poorly blossoms and poorly vegetativno breeds. Fluctuation of number of individuals by years, especially quantities generative (blossoming and fructifying) plants is noted.

Major factors of threat:
Anthropogenous: economic transformation of lands, the cabin of the wood of the main use, the increased recreational loadings (trampling, collecting plants) and a cattle pasture. Natural: a limiting factor in advance of a view of the North is, apparently, climatic; oppression of plants causes also strong shading arising at natural suktsessionny processes in fitotsenoza.

Protection measures:
"Bialowieza Forest", a number of wildlife areas in Brest grows in territories of the Polesia radiation and ecological reserve and the Berezinsky biospheric reserve, national parks "Pripyat" also ("Baranovichsky", "Boretsky", "Bugsky", "Buslovka", "Vorokhovo", "Lukovo", "Pribuzhsky Polesia", etc.) Vitebsk ("Osveysky"), Grodno ("Gozhevsky", "The castle wood", "the Lipichansky dense forest", "Kotra") and Minyoskoy ("Alba", "Brishche", "Volmyansky", "Glebkovka", "Kozyrsky", "Stiklevo", "Yukhnovsky") areas. It is grown up in the Central botanical garden NAN of Belarus, botanical gardens of the Vitebsk university and BGU, on a site in the Republican ecological center of pupils and youth (Minsk), long since cultivated by the population of the republic. Audit of the known locations and periodic ecological and biological control of their state, prevention in places of growth of anthropogenous influences are necessary (the selective sanitary cabins and cabins of leaving which are carried out to winter time are admissible); periodic clarification of a habitat (thinning of a wood and shrubby tier) and broader introduction of a look to culture as an ornamental, medicinal and melliferous plant is recommended.