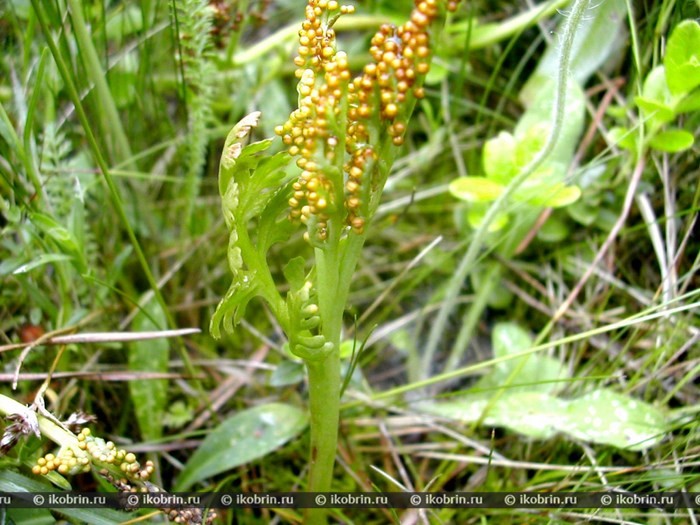 Description:
Perennial grassy korotkokornevishchny plant up to 20 cm high. Only not wintering vaya (sheet) it is differentiated on vegetative and sporiferous speak rapidly. The vegetative part departs above the middle of a plant on a short leg, oblong, plumose or, more rare, 2-peristorassechenny on 3-5 and more than couples of bladed or separate segments. Sporiferous part of a vaya on more or less long leg, 2-3-peristorassechennaya, panicled and branched.

Biology:
Sporonosit at the end of May - the first half of June, in damp years later. After a sporonosheniye the elevated part often dries up.

Number and tendency of its change:
Grows single copies and small groups, the number of plants in population more than 100 is very rare. Viability and number of individuals varies depending on weather conditions (strongly decreases in droughty years). In some locations (Stolbtsovsky, Pukhovichsky districts) it is repeatedly not found (perhaps, disappeared).

Major factors of threat:
Pasture and run of cattle, grass burning out, recreational loadings (trampling), anthropogenous transformation of the woods and meadows (raspakhivaniye and actions for improvement of their kulturtekhnichesky state).

Protection measures:
It is protected in the Berezinsky biospheric reserve and National park "Bialowieza Forest". The organization of the wildlife area in Volozhinsky district with prohibition of any economic activity (except mowing in the second half of summer), control of a state and studying of dynamics of number of the known populations, purposeful search of new locations during the early summer period is necessary.