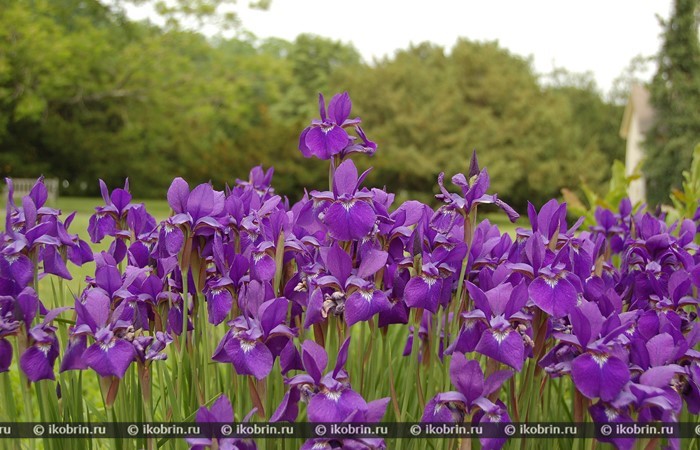 International importance:
It is included in the Red List of Belarus of the 1st and 2nd editions (1981, 1993). It is protected in Latvia and Lithuania.

Description:
Perennial grassy plant with a thick creeping rhizome. The basis has a cylindrical stalk, upright, hollow, up to 80 cm high, with numerous brown fibers - the remains of the died-off sheet vaginas, above branched. Radical leaves long, uzkolineyny, are shorter than a tsvetonos; stem - in number 2-3, small, at the basis stebleobjemlyushchy. An inflorescence from 2-3 flowers on a stalk top; flowers large, with a short kolokolchaty tube and six oblong dark blue shares; external shares with the oblong and return and ovoid plate unbent from top to bottom in a middle part pale blue with dark blue-violet veins; internal - one-color, dark blue, as well as external are narrowed in a light blue nail. The fruit - the box extended, oblong and oval, tupotrekhgranny, is almost twice longer than the width, with the light gray flattened numerous seeds.

Habitats:
Crude and boggy (mainly inundated) meadows, suburbs of bogs, zakustarenny coast of reservoirs, edges of the broad-leaved, small-leaved and mixed woods. To soils it is not exacting, but prefers rich with a humus, rather humidified, with neutral or subacidic reaction. It is exacting to light, but can grow in conditions of insignificant shading.

Biology:
Blossoms in May - June, fructifies in July - August. Entomofil. Reproduction seed and vegetative. Seed plants blossom in 3-5 years. Generative escapes are put in the fall, take place all cycle of development for one vegetative period; in the fall escapes die off. Barokhor, hydrochorus.

Number and tendency of its change:
Meets separate individuals and small groups on limited squares, occasionally in floodplains forms considerable thickets. In places tends to reduction of number.

Protection measures:
"Bialowieza Forest", "Narochansky" and "Pripyatyosky", the Berezinsky biospheric reserve, the Polesia radiation and ecological reserve and a number of wildlife areas grows in territories of national parks: "Bugsky", "Volkovyssky", "Vydritsa", "A count dense forest", "Dnepro-Sozhsky", "The castle wood", "the Lipichansky dense forest", "Central Pripyat", "Strelsky", etc. It is cultivated in the Central botanical garden, the Botanical garden of the Vitebsk university, in the Republican ecological center of pupils and youth (Minsk), grown up on garden and personal plots. The ban or restriction in places of growth of anthropogenous influences are necessary; broader introduction to culture as an ornamental plant is recommended.