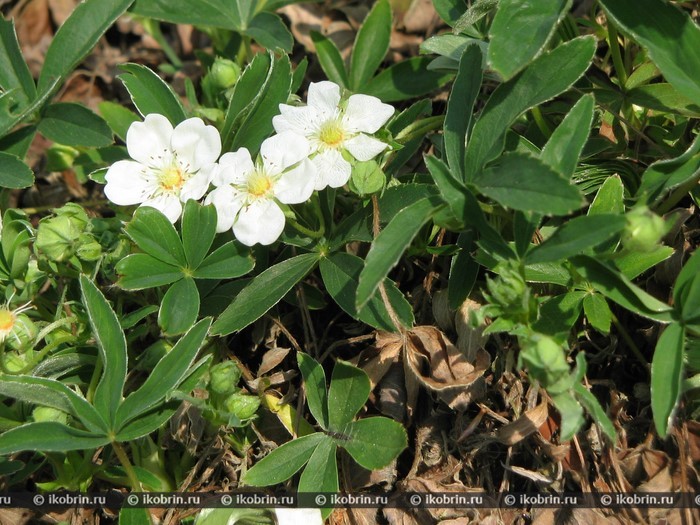 International importance:
In the Red List of Belarus it is included for the first time.

Description:
Perennial grassy plant 8-25 cm high with a horizontal ligneous rhizome up to 30 cm of Tsvetonosnye long stalks weak, among several, branched, on length not exceeding radical leaves. Dlinnochereshkovy palchato-syllabic leaves are collected in the radical socket; their leaflets in number 5, up to 10 cm long and up to 2 cm wide, oblong or the return lantsetnye, from below it is also at the edges silky pressed - hairy; stem leaves are reduced. The inflorescence is bifurcate, consists of 2-5 flowers on long pedicels; petals are white, vyemchaty. A fruit – a nutlet, at the basis hairy.

Habitats:
Grows in dry oak and pine (with oak impurity) the woods, on well warmed up open grass slopes of hills; prdpochitat soils rich with a humus.

Number and tendency of its change:
The majority of the known populations are not numerous (several tens copies), occupy the small spaces (from 0,5 to 50 sq.m). The most numerous local populations (in Bialowieza Forest, Buda-Koshelevsky and Mazyr districts) have the area from one to several hectares (with uneven diffusion raspredeleny single individuals and small groups of individuals on the area of population). In the last decade accurately expressed tendency of reduction of number of populations is observed.

Major factors of threat:
Continuous cabins of the wood, economic transformation of lands, pasturage of cattle and the raised recreational loadings (trampling).

Protection measures:
"Bugsky" (The Brest district), "Vorokhovo" (Kamenetsky district) and "Priluksky" (The Minsk district), biological wildlife areas "Castle wood" (Volkovyssky district), "Alba" (The Minsk district), "Buda-Koshelevsky", etc. grows in territories of national parks "Bialowieza Forest" and "Pripyat", in landscape wildlife areas. It is grown up in the Central botanical garden NAN of Belarus, Botanical garden BGU and the Republican ecological center of pupils and youth (Minsk). Control of a condition of populations, search of new locations and, if necessary, the organization of their protection, creation of botanical wildlife areas in places of mass growth in a complex with other rare species (in the Mazyr district), prevention in places of growth of a silverweed white negative anthropogenous impacts is necessary; broader introduction of a look to culture as decorative and a herb is recommended.