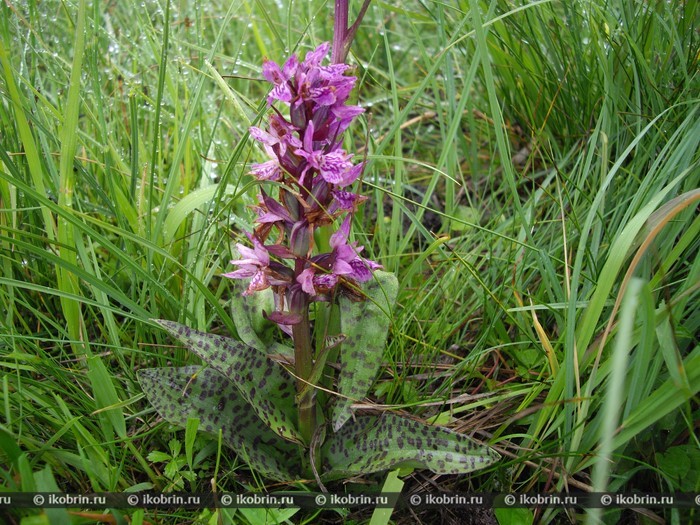 Status. The III category (VU) — a vulnerable look. It is included in the Red List of Belarus of the 2nd edition (1993). It is protected in the Russian Federation, Ukraine and Lithuania. It is brought in the Appendix II to the Convention SITES.

Short description. A perennial grassy plant with two flattened palchatorazdelny tubers and direct quite strong stalk 20 — 60 cm high. The lower leaves from oblong to shirokoyaytsevidny, rather stupid, narrowed to a top and to the basis, stebleobjemlyushchy, almost always with large brownish-violet spots. Flowers lilac-purple or dark-violet, are collected in a kolosovidny inflorescence. The lip is three-separate, seldom integral, with drawing from lines and strokes. The average blade is less lateral, zubchikovidny, stupid. Shporets is shorter than an ovary. Bracts in the lower part of an inflorescence exceed flowers. A fruit — a dry box [1, 2].

Distribution. Europe: Scandinavia, Atlantic, Central and Eastern Europe, Mediterranean [1]. In Belarus the look is in separate localities and island places of growth near northeast border of an area. Only 4 locations of a look were specified in the 2nd edition of the Red List that the orchis in the republic for that period of time is explained by weak taxonomical study of a sort. In the next years as a result of long-term studying of this sort in the territory of Belarus its specific structure [2, 3] is specified and it is established that the orchis May sporadic meets across all territory, but mainly in the western and central districts: Volozhinsky, Dzerzhinsk, Minsk, Molodechnensky, Myadelsky, Pukhovichsky, Stolbtsovsky and Uzdensky districts of the Minsk Region [4], in Volkovyssky, Grodno, Dyatlovsky, Zelvensky, Mos-tovsky and Novogrudsky districts of the Grodno Region. [4], in Baranovichskom, Berezovsky, Brest, Ivanovskoye, Ivatsevichsky, Kamenetsky, Lyakhovichsk, Maloritsk, Pinsk and Stolinsk districts of the Brest Region [5 — 10], in Verkhnedvinsky, Vitebsk, Lioznensky, Orshansky, Postavsky, Sennensky and Sharkovshchinsky districts of the Vitebsk Region [4, 11, 12], in the Babruysk and Osipovichsky districts of the Mogilev Region [4].

Habitats. Crude and boggy meadows, evtrofny bogs, are more rare the damp woods, forest edges and slopes of dolomitic pits at an exit of keys.

Biology. The beginning of blossoming — the end of May. Entomofil. Fructifies at the end of June-July. Reproduction is mainly seed. Anemokhor. Germination of seeds depends on existence in the soil of mycorrhizal mushrooms. The greatest mycorrhizal infection is observed at juvenile plants, with increase in age of plants it goes down [13].

Number and tendencies of its change. Meets single individuals or small groups, occasionally forms quite numerous populations numbering 100 — 200 plants (are revealed in 1996 — 1997 years in the Grodno, Dzerzhinsk and Dyatlovsky districts). Year fluctuation of number of individuals (is characteristic of all populations up to their total absence during separate seasons).

Major factors of threat. Intensive economic land development, including drying and meliorative works, early mowing to an obsemeneniye of plants, pasturage of cattle and recreational loadings (trampling and collecting the blossoming plants). Total absence of economic use of meadows (mowing, pasturage) promote replacement of an orchis by more competitive types.

Protection measures. "Bialowieza Forest", "Narochansky" and "Braslau Lakes", wildlife areas in Brest, Verkhnedvinsky, Dyatlovsky, Ivanovskoye, Ivatsevichsky, Minsk, Novogrudsky, Sharkovshchinsky and other districts grows in territories of national parks. It is grown up in the Republican ecological center of pupils and youth (Minsk). Periodic control of a condition of the known populations, search of new places of growth and, if necessary, the organization of their protection with prohibition or restriction in places of growth of an orchis of anthropogenous influences are necessary (mowing should be carried out in the second half of summer); broader introduction of an orchis May in culture as decorative and a herb is recommended.