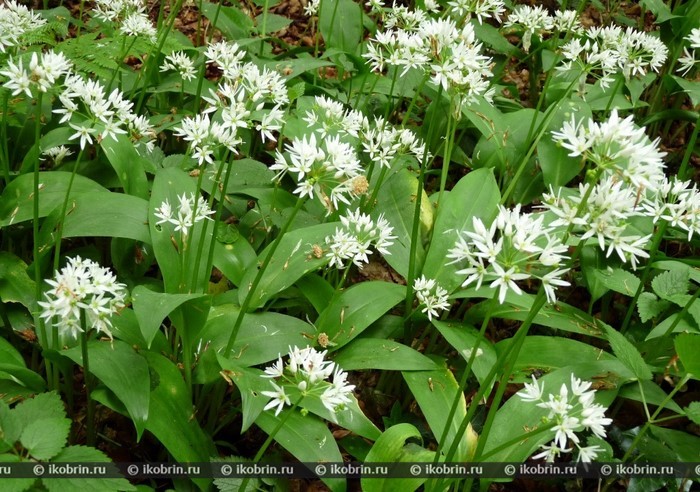 International importance:
Under the state protection in the republic it is for the first time taken in 1964. It is included in the Red List of Belarus of the 1st and 2nd editions (1981, 1993). It is protected by the law in Lithuania, Latvia, the Smolensk Region of Russia and Ukraine.

Description:
Perennial grassy bulbous plant. The bulb is spindle-shaped, about 1 cm thick, without covering cheshuy, consists of the only reserving scales representing the leaf basis. Tsvetonosny escape rounded trihedral, (60) cm 20-45 high, at the basis is dressed by vaginas of leaves. The blossoming plants have 2-3 leaves. The sheet plate lantsetny or oblong lantsetnaya, 10,0-20,0 cm long and 3,0-6,0 cm wide, is gradually narrowed in a scape 12-20 cm long. An inflorescence - the semi-spherical 10-30-floral umbrella before blooming of flowers put in a cover from two modified leaves. Leaflets of an okolotsvetnik white, 9-12 mm long. A fruit - almost spherical trihedral box with 2-6 seeds. Seeds are spherical, black, with a diameter of 3,0-3,5 mm.

Habitats:
Shady broad-leaved and broad-leaved fir forests of mainly snytevy type, near the rivers and streams, on suburbs of bogs and on oblesenny islands among bogs. Prefers fresh or damp, not sour soils and penumbral conditions rich with a humus.

Biology:
Late spring efemeroid. Begins vegetation in the second half of April, blossoms in May, fruits ripen in June. By the end of June escapes with boxes polegat and quickly collapse, seeds get enough sleep and, perhaps, are carried by ants. Reproduction seed and vegetative (by formation of affiliated bulbs).

Number and tendency of its change:
In favorable conditions is to seasonal dominants, dominating in the spring in a grass cover on the area up to several hectares. In populations individuals of pregenerative stages of development prevail, the blossoming plants make 20-30% of total number. In the last decades several populations which were near settlements disappeared (vicinities of of Popelevo of Pruzhansky district of the Brest Region, the vicinity of railway station "Energetik" of Dzerzhinsky district of the Minsk Region, etc.), the number of individuals in others decreased in connection with unregulated collecting by the population and trampling.

Major factors of threat:
Owing to the historical reasons, and also economic activity of the person of the places suitable for existence of populations of a look, in Belarus it is a little. It causes a look rarity, and in combination with its stenotopnost (narrow ekologo-phytocenotic amplitude) it is very vulnerable for any anthropogenous interventions. The most important of them are the cabin of the wood of the main use, drying melioration changing the water mode of territories and their microclimate. Considerable negative influence on stability and efficiency of populations is rendered by cut of leaves and trampling in the course of preparations as food and medicinal raw materials.

Protection measures:
"Vygonoshchanskoye", "Wild", "Zvanets", "Yelnya", "Bear onions", etc. grows in territories of National park "Bialowieza Forest", the Berezinsky biospheric reserve, wildlife areas "Big Yaminets". It is grown up in botanical gardens NAN of Belarus, the Vitebsk university and BGU, in the Respublikanyosky ecological center of pupils and youth (Minsk). It is necessary to forbid carrying out drainage not only in places of direct growth of onions bear, but also in adjacent territories; not to allow in places of its growth of cabins of the wood including selective as they lead to fragmentation of populations and decrease in level of their zhiznenesposobnost; to exercise control of a condition of populations, especially near settlements; to observe the decision forbidding collecting and sale of onions bear; to recommend broader introduction to culture as valuable food, melliferous and a herb.