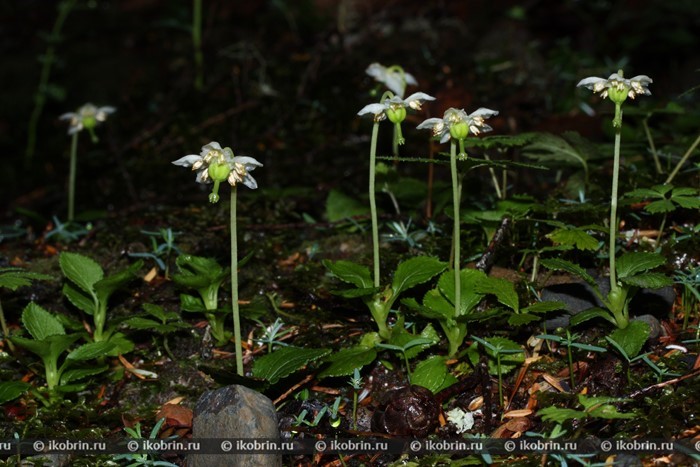 International importance:
In the Red List of Belarus it is included for the first time. It is protected in the territory of the Smolensk Region of Russia.

Description:
Perennial grassy plant 8-12 cm high with the thin branching root and the socket of evergreen leaves. Leaves are leathery, roundish, on edge small-pilchato-gorodchatye, dark green. A flower single, large, hanging, with the correct five-membered okolotsvetnik; the nimbus is white, widely opened, with a diameter of 12-25 mm. A fruit - upright almost spherical box.

Habitats:
Mainly damp mossy pine and fir forests. Avoids too dry and it is superfluous the humidified places.

Biology:
Blossoms in June - the beginning of July, fructifies in July-August. It is pollinated mainly by insects, but also self-pollination (a gravitational avtogamiya) is possible. Reproduction is generally seed.

Number and tendency of its change:
Usually populations not numerous also occupy the small spaces (1-5 sq.m, seldom more). At this look accurately expressed tendency to decrease in its number is observed (quantities of populations and quantity of individuals in them). For the last decade only ten locations of a look are revealed.

Protection measures:
Grows in territories of the Berezinsky biospheric reserve, national parks "Bialowieza Forest", "Braslau Lakes" and "Narochansky", a number of wildlife areas in Brest ("Buslovka", "Lukovo") and Vitebsk ("the Golubitsky dense forest", "Plover", "Red Bor", "Sinsh") areas. Periodic control of a condition of the known populations, search of new places of growth and, if necessary, the organization of their protection, the prevention in all places of growth one-flowers of negative anthropogenous impacts are necessary.