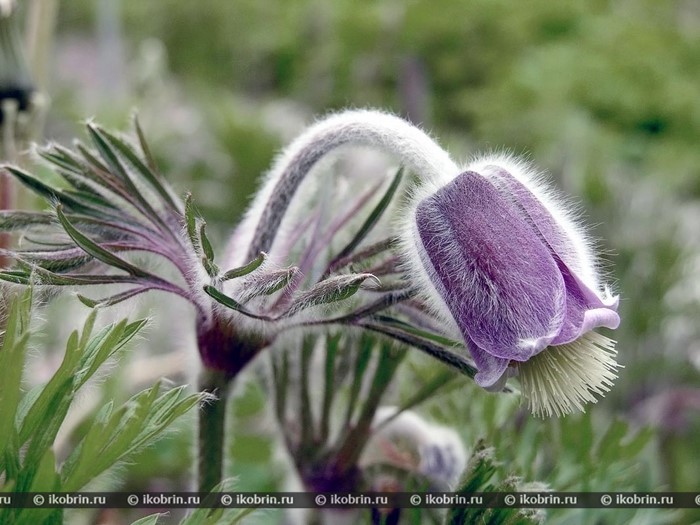 Description:
Perennial gustoopushenny grassy plant 10-25 cm high (at fruits to 50 cm) about one - or a many-domed short rhizome. Radical leaves form the socket, dlinnochereshkovy, oblong and ovoid, repeatedly plumose rassechennye on linear segments; leaves-pokryvaltsa (stem) in number 3, vlagalishcheobrazno grown together, divided into broad-gage shares. Flowers large, single, hanging, on long arcuately curved pedicels. Okolotsvetnik is kolokolchaty, usually pale lilac, from 6 free, oblong and ovoid, outside of trimmed, on a top of the unbent leaflets, up to 3 cm long. Fruits from balsas, numerous hairy odnosemyanny with a long ostevidny appendage.

Rasprostraniyeniye:
Europe (Scandinavia, northeast of Central Europe, Eastern Europe). The look is in Belarus on eastern frontier of an area. It is widespread mainly in the western areas of the republic and in the few places on Pripyat, is absent in the Vitebsk Region, very seldom meets in Minsk (only in the northwest) and Mogilev (single locations) areas. It is known in Baranovichskom, Berezovsky, Kamenetsky, Kobrinsk, Pinsk, Pruzhansky and Stolinsky districts of the Brest Region, in Braginsky, Buda-Koshelevsky, Zhitkovichsky, Zhlobinsky, Mazyr, Narovlyansky, Recyca, Rogachevsky and Hoyniksky districts of the Gomel Region, in the Grodno, Dyatlovsky, Lidsky, Mostovsky, Novogrudsky, Oshmyansky, Smorgonsky and Shchuchinsky districts of the Grodno Region, in Vileysky, Logoysky, for Myadelsk, Molodechnensk and Soligorsk districts of the Minsk Region, in the Slavgorod district of the Mogilev Region. According to gerbarny and literary data it was specified in vicinities of. Velesnitsa (Pinsky district) and Boriskovichi (Mazyr district), cities of Grodno and Minsk, item. Rounds, in the Mogilev province and the Krichevsky county (without exact indication of location).

Habitats:
The dry rarefied pine woods of lichen, heather, cowberry and mossy types (it is frequent on vskholmleniye), open sandy slopes of coast of the rivers.

Biology:
Blossoms in April - May. Entomofil. Leaves appear during blossoming. Reproduction is seed. The fruits ripening in May - June, extend by means of wind. At joint growth with the lumbago opened forms hybrids.

Number and tendency of its change:
Under a canopy of the wood usually grows absent-mindedly, single copies and small groups. More numerous populations on edges and cutting areas. At restoration of forest community the abundance of a look decreases by them. In a number of the locations located near settlements, number considerably was reduced or the look absolutely disappeared.

Major factors of threat:
Anthropogenous: deforestation with the subsequent economic transformation of lands (construction of recreation facilities, dachas, etc.), technogenic influences at deforestation, the raised recreational loadings (trampling, collecting the blossoming plants) as populations of this look are in the places attractive to a recreation. Natural: development of a dense moss and grass cover, reduction of illumination under a canopy of the wood.

Protection measures:
"Bialowieza Forest", "Narochansky" and "Pripyat", the Polesia radiation and ecological reserve, a number of wildlife areas, mainly in Grodno grows in territories of national parks ("Gozhevsky", "Klevitsa", "Kotra", "the Lipichansky dense forest", "Ozera", "Porechsky", "Sopotskinsky", etc.) and Brest ("Wild, "Rukhchansky") areas. It is grown up in the Central botanical garden NAN of Belarus. Periodic control of a condition of the known populations, prevention in places of growth of negative anthropogenous impacts are necessary (the selective sanitary cabins and cabins of leaving which are carried out to winter time are admissible); the organization of the biological wildlife area in Cherikovsky district of the Mogilev Region where the lumbago meadow grows in a complex with other rare species, and also its broader introduction to culture as decorative and a herb is recommended.