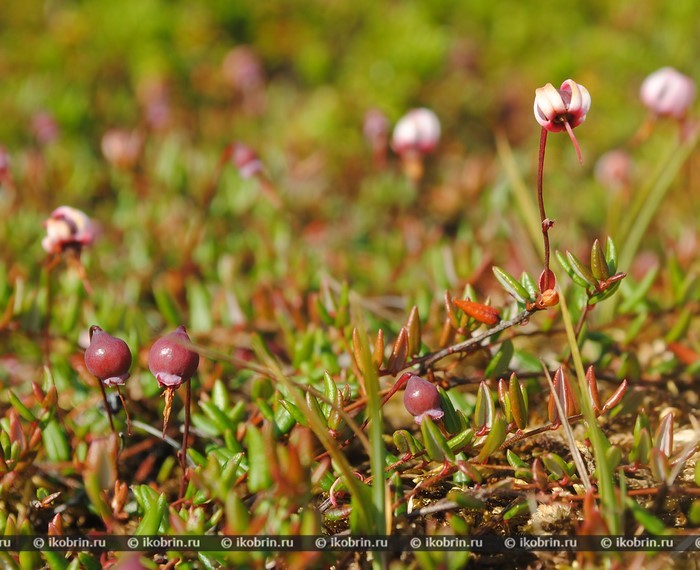 International importance:
In the Red List of Belarus it is included for the first time. It is protected in Ukraine.

Description:
Evergreen low shrub 10-30 cm high with thin threadlike creeping stalks. Leaves are next, leathery, small (length of 3-6 mm), oblong and ovoid, pointed, with zavorochenny edges, from above dark green, from below gray from a wax raid. Flowers single, on naked long pedicels; a nimbus deep-four-separate with the rose-red petals unbent back; bracts are below the middle of pedicels. A fruit – roundish small (diameter of 5-8 mm) dark red berry.

Rasprostraniyeniye:
Scandinavia, Eastern Europe, Western and Eastern Siberia, Far East (Kamchatka, Sakhalin), peninsula Korea. The tundra and taiga look which is in Belarus near the southern border of an area. Now it is authentically known in Stolinsky district (Morochno's bog) of the Brest Region (this location was specified also in 1949 by S. Kulchinsky), in Verkhnedvinsky, Vitebsk, Gluboksky, Gorodoksky, Lepelsky, Miorsky, Polotsk, Rossonsky, Shumilinsky districts of the Vitebsk Region, in Svislochskim the district of the Grodno Region, in Borisovsky, Myadelsky and Slutsk districts of the Minsk Region, in Belynichsky and Klichevsky districts of the Mogilev Region. Earlier it was specified for Rogachevsky district of the Gomel Region (a bog Cowberry), Klichevsky (a bog Vankovshchina, Orekhovka and Sosnovka), Kirovski and Gorecki of districts of the Mogilev Region and vicinities of Minsk.

Number and tendency of its change:
Occurs microgroups among a cranberry marsh.

Major factors of threat:
Drainage and development of bogs (first of all peatery), trampling when collecting a cranberry marsh.

Protection measures:
"Bialowieza Forest" and "Narochansky", the Berezinsky biospheric reserve, the landscape wildlife area "Red Bor" grows in territories of national parks. Periodic control of a condition of the known populations, search of new places of growth and, if necessary, the organization of their protection, the prevention in places of growth of a cranberry small-fruited negative anthropogenous impacts, restriction of recreational loads of marsh massifs are necessary.