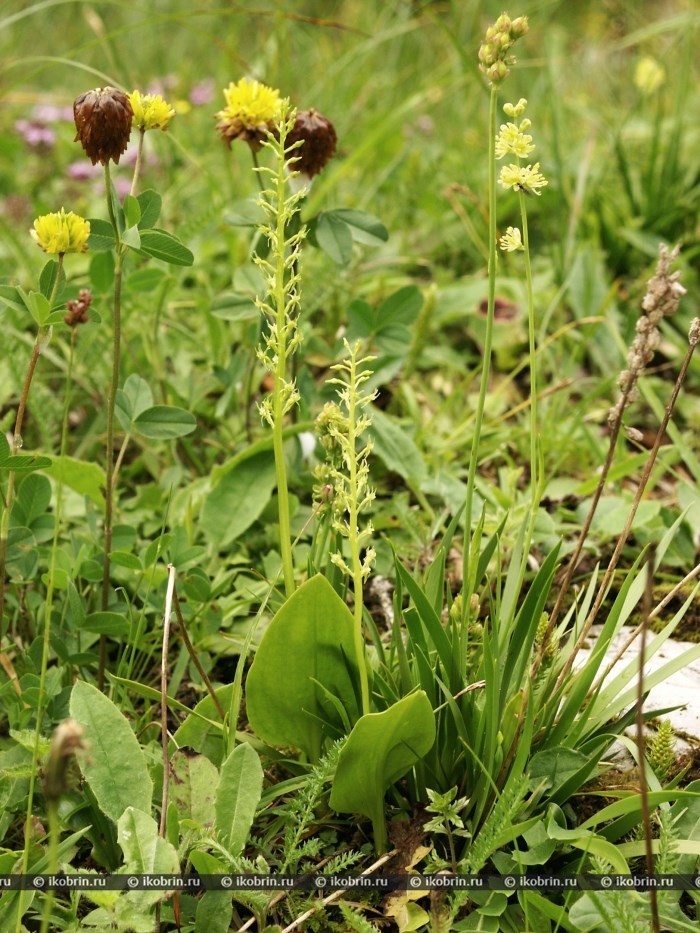 Description:
Perennial grassy plant with a short rhizome and klubnevidno the stalk 8-30 cm high thickened at the basis. Sheet 1 (it is rare 2), oblong and ovoid, 3-10 cm long, 1,2-5 cm wide, rather stupid pointed, at the basis narrowed in a scape, a comprehensive stalk, is located at the stalk basis. Flowers small, pale green, are collected in a straight line friable multiflowered (to 60 flowers) a brush. The lip at the basis shirokoyaytsevidny, a little concave, on a top narrowed in linearly-lantsetnoye point, is turned up. Bracts are lantsetny, zayoostrenny, are equal or ovaries are shorter. A fruit - a roundish box with numerous seeds.

Rasprostraniyeniye:
Eurasia (Central and Eastern Europe, Scandinavia, Mediterranean, Asia Minor, Siberia, Far East, Mongolia, Japan, China), North America (northwest). The Golarktichesky boreal look which is in Belarus in separate localities within flat part of an area. In the territory of the republic occasionally meets in northern and central districts: Braslavsky, Gluboksky, Dokshitsky, Lepelsky, Postavsky, Rossonsky, Sennensky, Ushachsky, Chashniksky and Sharkovshchinsky districts of the Vitebsk Region, in Ostrovetsky and Shchuchinsky districts of the Grodno Region, in Volozhinsky, Logoysky, Myadelsky and Smolevichsky districts of the Minsk Region, in Osipovichsky and Cherikovsky districts of the Mogilev Region, and also in Pruzhansky district of the Brest Region. Earlier it was noted in vicinities of Minsk, Mogilev, Zhlobin and in Bialowieza Forest.

Habitats:
Suburbs of sfagnovy bogs, crude and boggy meadows and the woods (coniferous and mixed), fenny coast of reservoirs. The Slabokonkurentosposobny look which is usually growing in conditions of the rarefied herbage at partial shading.

Biology:
Blossoms in June - July, fructifies in July - August. Entomofil. Reproduction is seed, extremely seldom vegetative. Anemokhor. Seeds are small, sprout only in the presence of a mycorrhizal mushroom. The green leaf appears for the 5th year, blossoming comes in 10-11 years. Life expectancy of an individual of 15-20 years.

Number and tendency of its change:
Meets single individuals or small groups.

Protection measures:
It is protected in the Berezinsky biospheric reserve, in National park "Narochansky", hydrological wildlife areas of "Glubokoye-Cherbomyslo" (The Polotsk district), "White" (Gluboksky district), "Richie" (Braslavsky district) and "Servech" (the Dokshitsky district). Audit of the known locations, a constant control of a condition of the known populations, search of new places of growth, the organization of protection of all locations of a myakotnitsa with prohibition in places of growth of anthropogenous influences, studying of opportunities and features of cultivation of a look in culture are necessary.