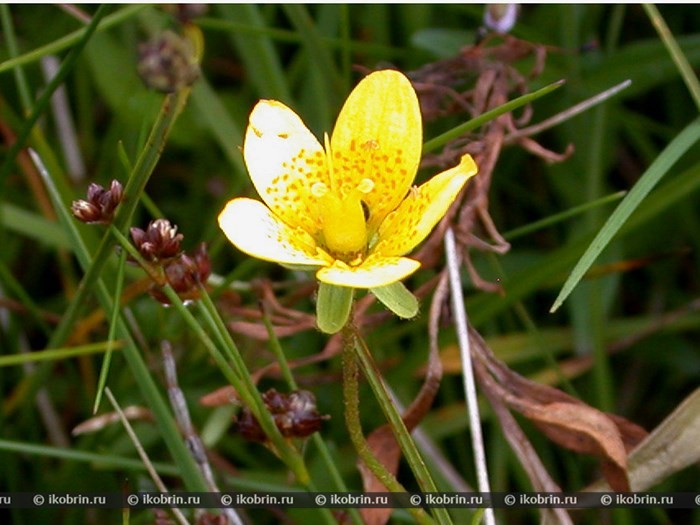 Description:
The perennial grassy plant with single or several upright stalks 10-15 high (35) cm and olistvenny creeping escapes which is quite often forming small dernovinka. The stalk in the lower part almost naked, in top - is trimmed the bulged reddish hairs. Leaves are light green, naked, next, elongated lantsetnye, sedentary; lower - are brought together in the socket and narrowed in a scape. Flowers on 1-4 are collected on a stalk top. Petals bright yellow with orange points and two borodavochka (nektarnik) at the basis. Chashelistiki at the end of blossoming down unbent. A fruit - a 2-gnezdny two-horned oblong and oval box.

Rasprostraniyeniye:
Eurasia (Arctic and subarctic zones of Europe and Siberia, western regions of a forest zone), North America (Arctic and mountainous areas). The Arktoborealny relic look which is in Belarus in separate localities on the southern border of an area. According to literary data Grodno, Slonim, Grivda, and also in the Mogilev province, Myadelsky and Verkhnedvinsky districts grew in Braginsky and Slutsk districts, in Novogrudk's vicinities. There is gerbarny collecting from Bykhovsky, Gomel, Gorecki, the Minsk, Orshansky, Rogachevsky and Sennensky districts. In recent years it was noted only in the Grodno, Dokshitsky, Lepelsky and Pruzhansky districts.

Number and tendency of its change:
Grows at small groups and single copies on the limited square.

Protection measures:
Grows in territories of National park "Bialowieza Forest" and the Berezinsky biospheric reserve. Audit of the known locations and a constant control of a condition of populations, the organization in unprotected places of growth of specialized botanical wildlife areas, identification of new places of growth and ensuring their protection, prohibition of all types of economic activity, test in culture, artificial moving in natural habitats are necessary.