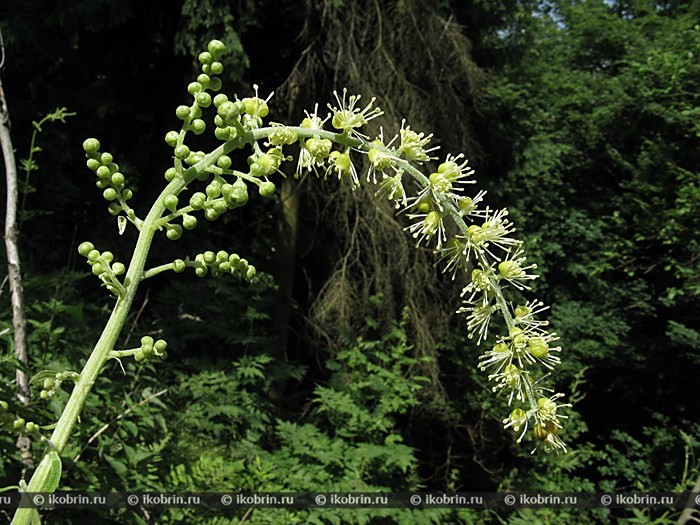 International importance:
Under the state protection in the republic it is for the first time taken in 1964. It is brought in the Red List of Belarus of the 1st and 2nd editions (1981, 1993). It is protected in Poland.

Description:
Perennial grassy plant with a thick rhizome and upright, naked, to the inflorescence slightly furrowed stalk up to 2,5 m high. Leaves are next, it is wide - triangular, 2-3-neparnoperistorassechennye; radical – on long scapes larger, than almost sedentary top. Leaflets are ovoid, pointed, on edge unevenly dvazhdypilchaty or krupnozubchaty. Scapes and veins on the lower surface of leaves are covered with scattered simple hairs. Flowers oboyepoly, with bracts, small, greenish-white, are collected in multiflowered top brushes or clustery whisks. The axis of an inflorescence and a pedicel are covered with short simple and ferruterous hairs. A fruit – a multileaflet, separate balsas light brown, naked, with the bent nose short back. Seeds are numerous, small, are covered with directly remote light brown filmy scales. A plant with an unpleasant smell.

Rasprostraniyeniye:
Central Europe and western areas of Eastern Europe. In Belarus this relic, by origin the Central European forest-steppe look is behind northeast border of an area. 2 island sites – Bialowieza Forest and the Mazyr ridge are known. klopogon European at different times found in Bialowieza Forest in 10 quarters. The Mazyr locality is presented by locations in the Mazyr district of the Gomel Region now: in the neighborhood of the villages of Strelsk and White, and also in ravines on the northeast suburb of Mazyr. The location revealed in 1972 in vicinities of of Homichki on an edge of the pine and oak wood by 1998 is destroyed as a result of pasturage and run of cattle. Earlier it was noted in vicinities of Brest and in Bialowieza Forest.

Number and tendency of its change:
In all known locations the number of individuals does not exceed 20 pieces, the majority of them ananthous. Condition of regional population critical.

Major factors of threat:
Anthropogenous: economic transformation of lands, cabins of the wood of the main use, pasturage and run of cattle, excessive recreational loadings (collecting the blossoming plants and trampling).

Protection measures:
Also "Strelsky" grows in territories of National park "Bialowieza Forest", landscape wildlife areas "Mazyr ravines". It is grown up in the Central botanical garden NAN of Belarus, Botanical garden BGU and in the Republican ecological center of pupils and youth (Minsk). Are necessary a constant control of a condition of the known populations; search of new places of growth and, if necessary, organization of their protection; in places of growth of a look it is necessary to forbid negative anthropogenous impact (the selective sanitary cabins and cabins of leaving which are carried out to the winter period are allowed); it is expedient to keep a look gene pool in the conditions of culture and to settle in natural ecotops; to recommend to the population to enter more widely into culture on seasonal and personal plots as an ornamental plant.