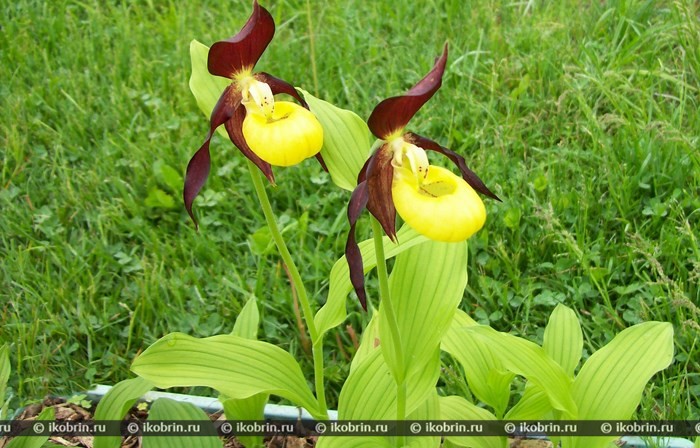 Description:
Perennial korotkokornevishchny plant with a direct oblistvenny stalk 25-50 cm high. Leaves not numerous (3-4), next, shirokoelliptichesky, large (up to 18 cm long and up to 12 cm wide), with well expressed arcuate zhilkovaniye. Flowers large, with a diameter of 6-8 cm, single or on 2-3, with meshkovidno blown up (like a shoe) a lip. Leaflets of an okolotsvetnik (except a lip) lantsetny, pointed, reddish-brown, slightly twisted. The lip is bright yellow, with reddish krapina inside. A fruit - the box which is opened with 3-6 longitudinal shutters with small numerous seeds.

Rasprostraniyeniye:
The area covers the most part of Europe (except the South), the Urals, the southern part of Siberia and the Far East, northern and northeast Kazakhstan, Mongolia, the North of China and peninsula Korea, North America. Relic, by origin the eurosiberian subtaiga look which is in the territory of Belarus in the isolated localities of the European fragment of an area. According to literary and gerbarny data it was noted for vicinities of Grodno, Minsk, Mogilev, Slonim and Slutsk, and also in Gluboksky, Krupsky, Postavsky and Svislochsky districts. For the last 20-30 years it is found in the Kamenetsky district of the Brest Region, in Braslavsky, Vitebsk, Lepelsky, Sennensky and Sharkovshchinsky districts of the Vitebsk Region, in the Grodno and Novogrudsky districts of the Grodno Region and Cherikovsky district of the Mogilev Region, in the Mazyr, Recyca and Hoyniksky districts of the Gomel Region. In the nineties the last century new places of distribution of a look in southwest part of Belarus in a strip of Hmelevka - Onions Divin were revealed: in Berezovsky, Drogichinsky, Ivatsevichsky, Kobrin, Luninetsky, Maloritsk, Pinsk, Pruzhansky and Stolinsky districts.

Habitats:
The rarefied broad-leaved, coniferous, coniferous and broad-leaved and small-leaved forests, on forest edges, on suburbs of bogs; prefers fresh, neutral, rich with a humus and calcium of the soil and penumbral conditions.

Biology:
Blossoms in May - June, fructifies in August. Entomofil. Reproduction vegetative and seed (mainly). Anemokhor. As well as at all orkhidny, at a shoe a difficult and long cycle of development. Germination of seeds requires existence in the soil of mushrooms-simbiontov. The first leaf appears in 4 years, blossoming comes in 15-17 years.

Number and tendency of its change:
In the majority of locations the number of individuals is small. In Bialowieza Forest in two populations there are 14 copies, in the Berezinsky reserve 11 populations of a shoe, with a total number about 150-300 plants are revealed. The large local populations numbering from 2 to 6 thousand plants are found in southwest part of the republic. The number of populations is subject to considerable year fluctuations that is partly caused by ability of a look to pass into a condition of secondary rest. In culture in weather climatic conditions Vitebsk is partially damaged by hard frosts, does not fructify (by results of 6 years' supervision).

Major factors of threat:
The cabin of the wood of the main use, drying and meliorative works, economic transformation of lands, pasturage of cattle and the raised recreational loadings (trampling, collecting the blossoming plants), overgrowing of ecotops as a bush and subgrowth of tree species.

Protection measures:
"Bialowieza Forest" and "Narochansky", the Berezinsky biospheric reserve, in wildlife areas "Wild" (Pruzhansky district), "Svityazyansky" (Novogrudsky district), "Strelsky" (The Mazyr district), "the Divin-Veliky Wood" (Kobrin district), "Lukovo" (Maloritsky district), "Sporovsky" (Berezovsky the district), "Luninsky" (Luninetsky district), "Zvanets" (Drogichinsky district), "Rukhchansky" (Stolinsky district), "Zavishye" (The Ivanovo district), "Klishcha" (Kobrin district), "Tyrvovichi" (Pinsky district), etc. grows in territories of national parks. It is grown up in the Central botanical garden NAN of Belarus, the Republican ecological center of pupils and youth (Minsk), in the Botanical garden of the Vitebsk university. Periodic control of a condition of the known populations, search of new places of growth and the organization of their protection, strict observance of the mode of protection in reserved territories, prevention in places of growth of a shoe of anthropogenous influences are necessary (the selective sanitary cabins and cabins of leaving which are carried out to the winter period are allowed); target optimization of habitats (periodic clarification) and broader introduction of a look to culture as an ornamental plant are recommended.