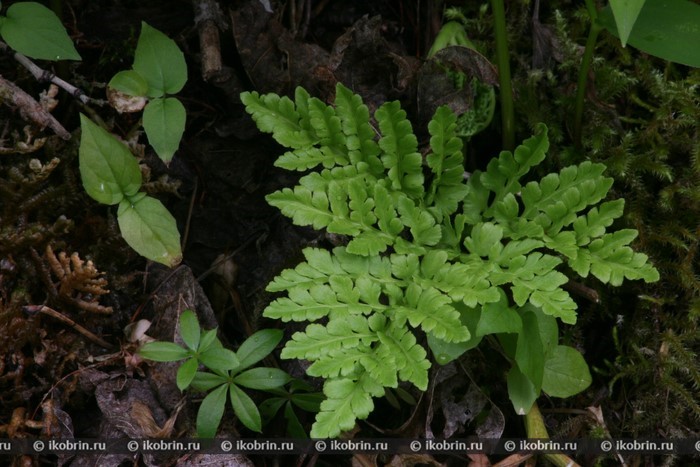 International importance:
In the Red List of Belarus it is included for the first time. It is protected in the Smolensk region to Russia, Lithuania, Latvia and Poland. It is included in the Appendix I to the Bern convention.

Description:
Perennial grassy korotkokornevishchny plant up to 30 cm high of Vayi (leaves) wintering plates usually two, one of them which wintered, yellowish-green, in a condition of withering, the second, the current year of vegetation, dark green. Vay are differentiated on vegetative and sporiferous speak rapidly. The vegetative part departs near the plant basis (almost at a soil surface) on a long leg, shirokoyaytsevidny, 2-3-peristorassechennaya; the final segments which are rounded off. Sporiferous part of a vaya on very long leg, 2-3-peristorassechennaya, metalchatorazvetvlenny.

Habitats:
Dry and the light pine, birch and mixed woods, meets on edges, glades, roadsides of roads, glades and slope sites more often; more rare - on nizkotravny lugovina with belousy sticking out, a fescue sheep, a thyme ordinary, a heather ordinary and lichens.

Biology:
Reproduction sporous and vegetative. Disputes ripen in July. Anemokhor. After a sporonosheniye the sporiferous part of a vaya dies off, and the vegetative part winters and completely dies off after expansion of a new vaya. Zarostok (gametofit) within several years develops underground at the expense of a mikoriza.

Number and tendency of its change:
Grows at separate individuals and nemnogochislennm groups on limited squares (in several square meters.

Major factors of threat:
Cabins of the wood of the main use, pasturage and run of cattle, grass burning out, excessive recreational loadings (trampling), anthropogenous transformation of meadows (plowing), natural changes of a vegetable cover.

Protection measures:
"Bialowieza Forest" and "Narochansky", wildlife areas "Volkovyssky", "Mikhalinsko-Berezovsky", "Sporovsky", "Strelsky", etc. grows in territories of the Berezinsky biospheric reserve, national parks. It is necessary to support the existing ecological mode in places of growth: in this regard not to allow anthropogenous influences (the selective sanitary cabins and cabins of leaving which are carried out to the winter period are allowed), in the second half of summer to carry out mowing with the purpose to reduce the trans-species competition and to prevent possible change of a vegetable cover. To carry out purposeful search of new places of growth. To keep a look gene pool by means of cultivation.