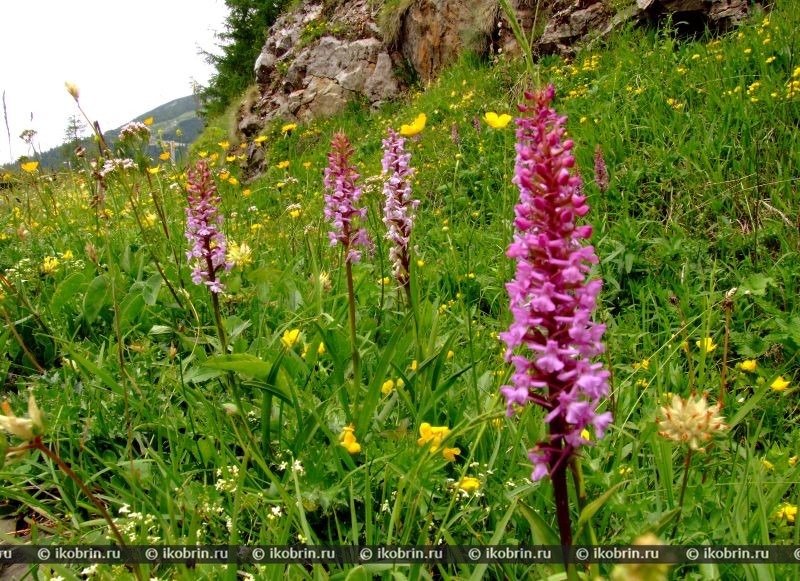 International importance:
in the Red List of the 2nd edition (1993). It is protected in Ukraine, the Smolensk Region of Russia, Lithuania, Latvia. It is included in the Appendix II to the Convention SITES.

Description:
Perennial grassy plant with 4-6 palchatolopastny, squeezed from sides tubers and the olistvenny stalk up to 65 cm high at the basis covered with brownish sheet vaginas. The leaves (4-7) linearly-lantsetnye pointed, lengthways put, which on a top are pulled together in "bashlychok". Flowers small, lilac-pink, with a carnation smell, are collected in a dense kolosovidny inflorescence. The lip is rhombic, 3-bladed, with almost ovoid stupid blades (average is a little longer than the dispersing lateral) and long crescently curved shporets who is 1,5-2 times longer than an ovary. The ovary is sedentary, twisted. A fruit - the dry extended box. Seeds are small, numerous.

Biology:
Blossoms in June - July, fructifies in July - August. Treats highly specialized entomofila: his pollinators - day and night insects - butterflies, flies, bees. Reproduction is seed. Anemokhor. Germination of seeds underground; for the 3rd year there is the first green leaf, the plant for 6-7 year blossoms. During all life, and especially at young age, the kokushnik is connected with a mycorrhizal mushroom.

Number and tendency of its change:
Number is small. In the known locations meets single individuals or small groups.

Major factors of threat:
Anthropogenous - cabins of the wood of the main use with the subsequent economic transformation of lands, drying and meliorative works, excessive pasturage of cattle, recreational loadings (trampling, collecting and excavation of plants).