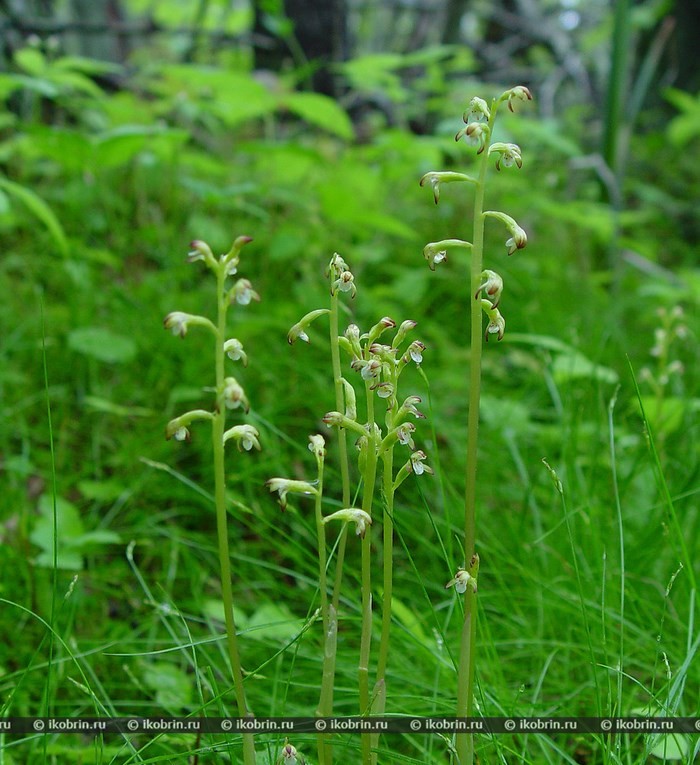 Description:
The long-term, deprived of a chlorophyll plant with a whitish, fleshy korallovidno-branched rhizome. A stalk 10-30 cm high, yellowish, leafless, with 2-4 webby vaginas of the reduced leaves. Flowers small, hanging, yellowish or greenish-white, are collected till 2-10 in a friable brush. The lip is three-blade, whitish with red krapina. The ovary is direct, the pedicel more long twisted. A fruit - a dry box.

Rasprostraniyeniye:
Eurasia, North America. Relic, by origin the tsirkumborealny taiga look which is in Belarus near the southern limit of distribution. Meets in Verkhnedvinsky, Vitebsk, Gorodoksky, Dokshitsky, Lepelsky, Polotsk, Postavsky, Rossonsky and Sennensky districts of the Vitebsk Region, in the Minsk and Myadelsky districts of the Minsk Region. The southern points of distribution are Bialowieza Forest and vicinities of railway station "Zakrutin" on border of the Brest and Maloritsky districts. According to literary data it was noted in Grodno, Mazyr and Mogilev, in Pinsk the district (of Velesnits).

Habitats:
The boggy coniferous, mixed and deciduous woods with the rarefied grass cover, meadows, suburbs of bogs and boggy coast of lakes. Prefers the penumbral, well humidified, as a rule, zamokhovely sites.

Number and tendency of its change:
Usually grows at single individuals or small groups (on 5-6 plants); occasionally populations numerous. For example, in vicinities of of Sukoli of Verkhnedvinsky district in a boggy birch forest on 1 sq.m there were about 30 plants.

Protection measures:
"Bialowieza Forest" and "Narochansky", and also wildlife areas grows in Rossonsky, Verkhnedvinsky, Vitebsk, Postavsky and Polotsk districts in territories of the Berezinsky biospheric reserve, national parks. The constant control of a condition of the known populations, search of new locations and, if necessary, the organization of their protection, prevention in places of growth of the above-stated types of anthropogenous influences is necessary.