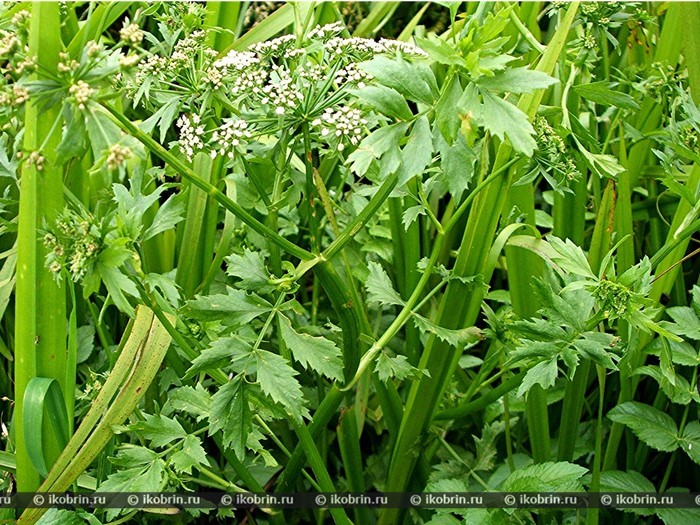 International importance:
It is included in the Red List of Belarus of the 2nd edition (1993).

Description:
Perennial grassy plant 80-90 cm high. The stalk ascending, which is taking roots in the lower knots and creeping hundred-bosoms departing from them. Leaves neparnoperistoslozhny with 5–9 couples of leaflets. Leaflets are oblong, on edge gear, up to 7 cm long, top usually three-blade. Flowers whitish, small (diameter about 3 mm), are collected in an inflorescence a difficult umbrella. A fruit – a visloplodnik.

Rasprostraniyeniye:
Scandinavia, Atlantic, Central and Eastern Europe, Caucasus, Mediterranean, Asia and Central Asia; separate locations (mainly strange origin) are known also in South West Africa, North America and Australia. In Belarus is on northeast border of the European part of an area. So far more than 20 locations almost across all territory of Belarus are known (except the Gomel Region) the majority of which is dated for the western areas of the republic. Modern data podverzhdatsya locations in Gluboksky and Polotsk districts of the Vitebsk Region; in Voronovsky, Grodno, Mostovsky, Novogrudsky, Oshmyansky, Svislochsky, Smorgonsky and Shchuchinsky districts of the Grodno Region; in Vileysky, Volozhinsky, Dzerzhinsk, Logoysky, Smolevichsky and Stolbtsovsky districts of the Minsk Region; Cherikovsky district of the Mogilev Region; Baranovichsky, Brest, Gantsevichsky and Kamenetsky districts of the Brest Region. Earlier it was noted also for the Mogilev province (without exact indication of location), vicinities of Mogilev and Mr. Zelva.

Habitats:
Coast and shoal of the small rivers, streams, springs, klyuchevinny bogs (usually in places of an exit of ground waters).

Number and tendency of its change:
In places of growth quite often forms thickets. Number is rather stable. Generative plants in population usually less than 10%.

Protection measures:
It is protected in territories of National park "Bialowieza Forest" and a number of wildlife areas in the Brest, Vileysky, Gluboksky, Grodno and Shchuchinsky districts. Preservation of the existing hydrological mode in places of growth is necessary; it is necessary to carry out purposeful search of new places in suitable habitats, to carry out control of a condition of the known populations (with studying of dynamics of populations and their anthropogenous stability), to recommend a look for cultivation in the conditions of culture as an ornamental, medicinal and food plant.