On the card of audit of lands Kobrin, made by Dmitry Sapegoy in the 16th century the Spassky monastery, Prechistensky, Spassky, Nikolsky, Peter and Paul churches are noted. Today the Prechistensky church did not remain. 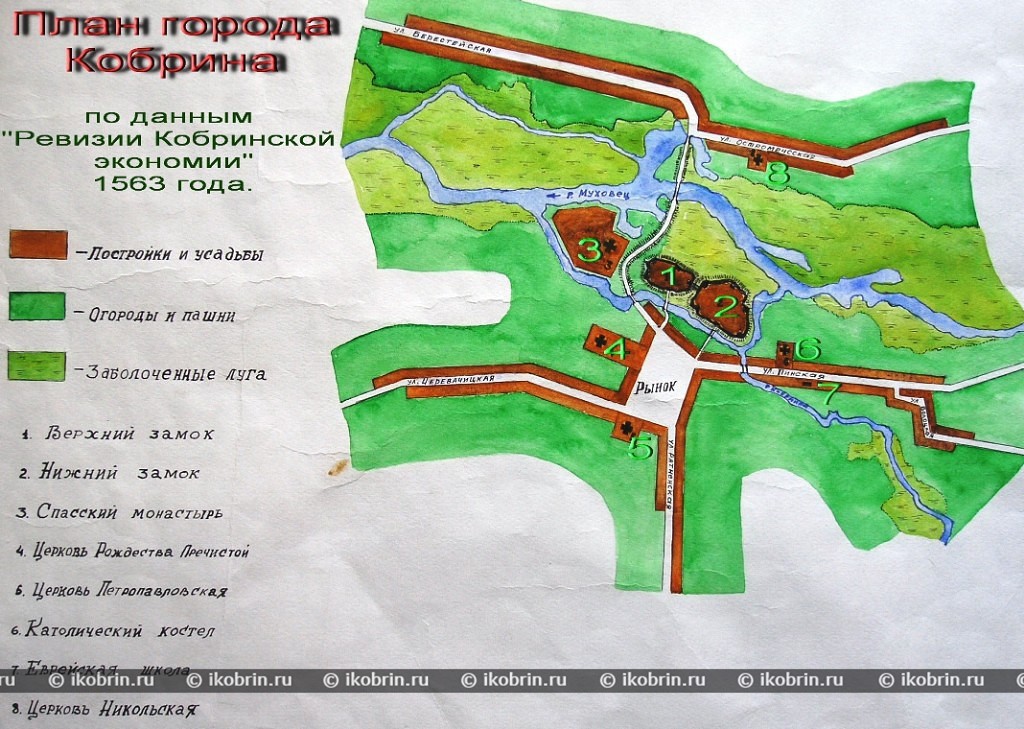 From historical researches it is known that the monastery is founded at the end of the 15th century by Kobrin princes Ivan Semenovich and his wife Fedora. Traditionally monastic complex included: the main stone building, wooden church of Saviour, two ponds and a number of economic constructions with lands to the river Shevna. Endured the ancient monastery much: wars and hard times, reconsecration in an uniatstvo when its thorough apartments served for papal cathedrals, and it began to belong to the Bazilikansky award. In the Russian-French war of 1812 already shabby wooden Church of the Saviour burned down. Since 1830 in the monastery there was a district spiritual school. In the years of 1 world war and revolution the building of the monastery came to full desolation. It was restored at the Polish authorities under needs of povetovy court, it is possible therefore in it law-enforcement bodies were located until recently.

Today the shrine returned the believer. And here revival and restoration of the ancient Spassky monastery as the operating women's orthodox monastery began. With lighting on August 12, 2011 we believe that again its glory will begin to shine and even ancient rings will be found. The monument of architecture of the Belarusian baroque will undergo the sparing reconstruction under needs of the monastery where also the third floor will be used, and the pediment will finish a small bulbous dome under a cross.

As if Saint Alexander Nevsky's cathedral, white stone under gold shine of 5 domes, stately towers in historical part of the city, dominating the silhouette over the updated bridge and the reconstructed embankment. Harmoniously finishes an architectural complex of the center of Kobrin. The cathedral founded in 1867 in memory of release of peasants from serf slavery had desolation times, adapted for planetarium, a cinema hall and at last, under archive too. For the expired 20 anniversary its wonderful realization to the magnificent memorial temple for the sake of the Saint defender of all soldiers blessed prince Alexander Nevsky happened efforts of all decent arrival. 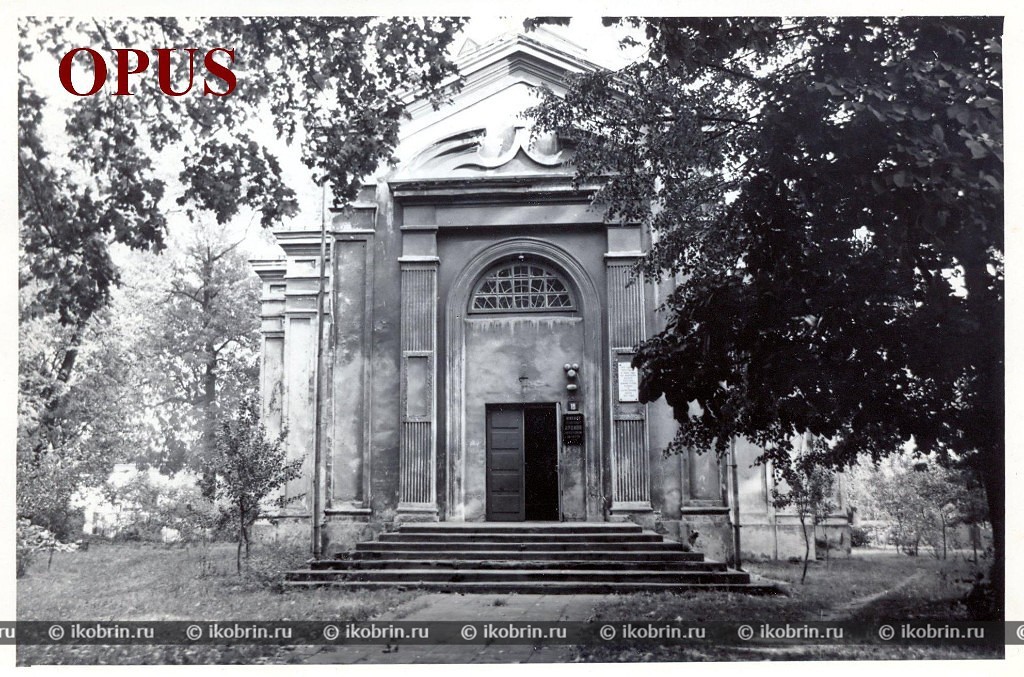 By Old Slavic tradition of the street of our city are called on what there is, and in the direction where the road of the traveler conducts. On Nikolskaya Street - the St. Nicholas Church founded in the 15th century by the Kobrin prince Ivan Semenovich. During the union belonged to uniatsky church. St. Nicholas Church took the real form at the beginning of the 19th century with the memorial plate kept since use of the temple under archive by our museum: "This church is built for Mukhovetsky parishioners and works of the head Ilya Klishevich and Nikolay Filippovich, the belltower is boarded and again attached by Timofey Romanchuk and decorated with icons own works of Fedor Vasilevsky in 1839".

Church - a monument of traditional wooden architecture devoted to the Prelate Nicholas The Wonderworker, the patron of travelers famous to all Christian world and wandering, people creative, always staying in search of the ways in art.

Among the oldest temples of the city and Peter and Paul church. Earlier was in the region of a market square. History of the commander A. V. Suvorov staying here on the settlement who visited the temple and liked to call to service is known. The Peter and Paul church took a modern form in 1912 with transfer of the temple from the central part of the city on the suburb, the place of Catholic and orthodox burials. In the territory of orthodox parish the memorial crypt - a small chapel with niches under sculptures, a figure of the angel with a cross executed from sandstone on Alexander Mickiewicz's grave settled down. Thus, at the intersection of ancient streets on the high sandy coast of Mukhovts historically there was a peaceful co-existence of two faiths of one Christian belief. History of the Peter and Paul church it is remarkable also the fact that at the time of godlessness it remained the only operating temple. In arrival the banner which is hung out in the right limit was held in remembrance an orthodox brotherhood of 1928 also. 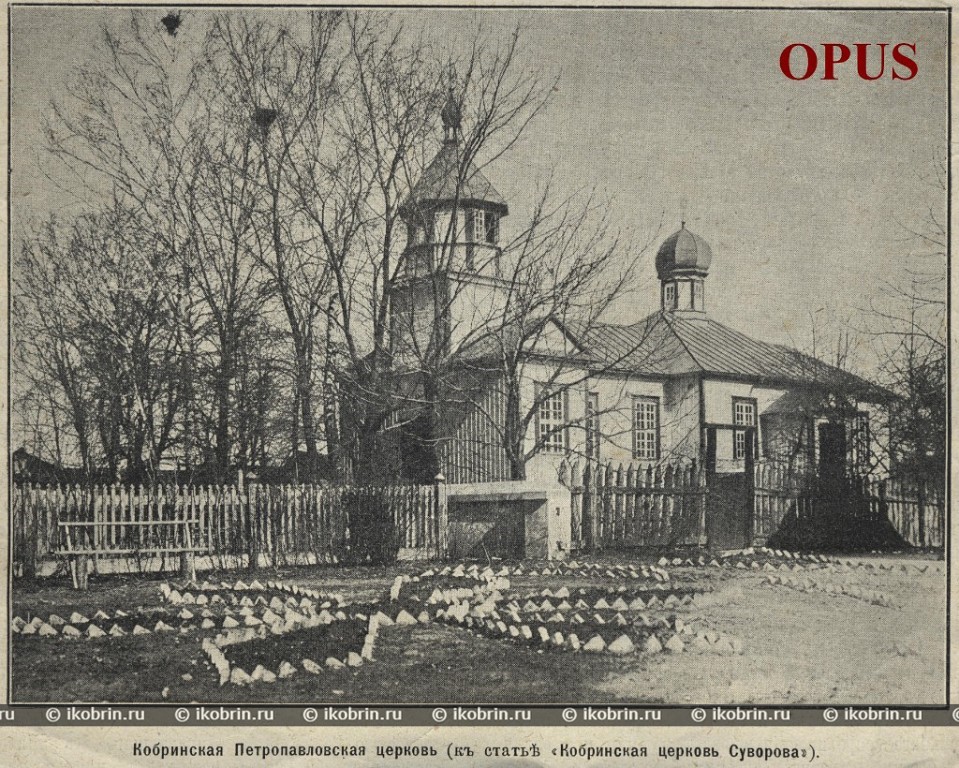 Cutting from the newspaper of 1911 Kobrin Peter and Paul church 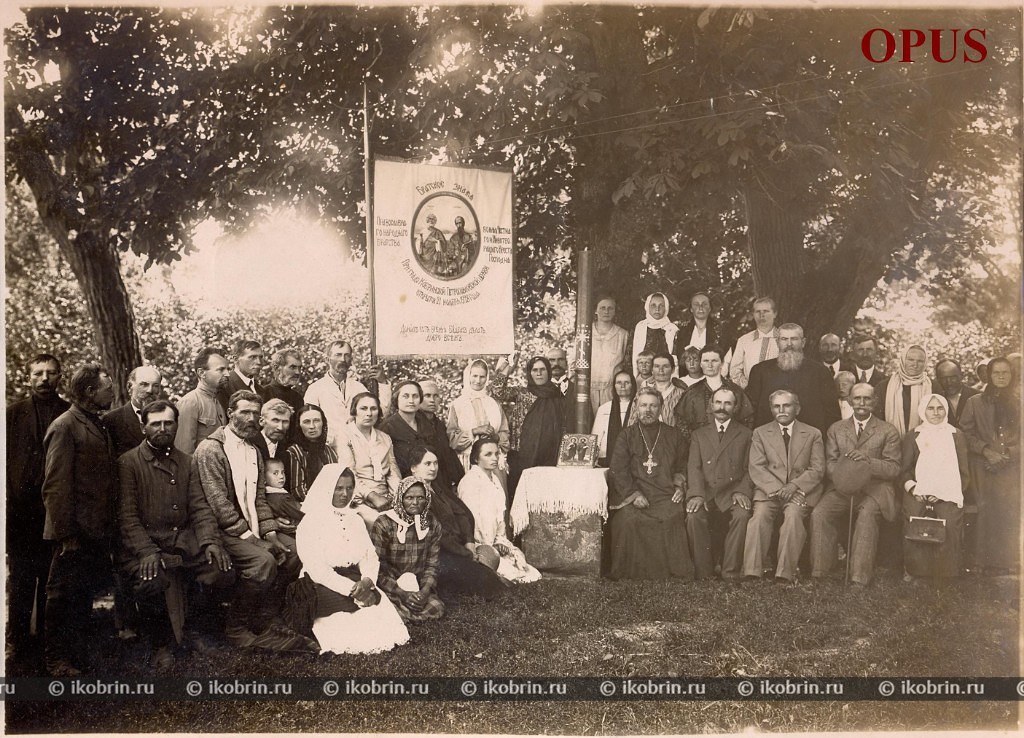 The orthodox national brotherhood at Kobrin Peter and Paul church created on November 21, 1928.

From West side of Pervomayskaya Street having passed stone steps, the temple towers a tent belltower with drum part of a vosmerik on a chetverika, from a figured pediment from a fresco Saints Pyotr and Pavel executed in 1982 by the famous Kobrin artist V. L. Kolesnikov as if invite. Also measured reading the acathist from the limit calling soul further to the temple is heard, ennobling a prayer of the orthodox parishioner and appealing his spirit to celestial. As Mukhovets to Bug bears the waters, and time passes and the Peter and Paul temple met the 100 anniversary by gold of five domes.

Church of St. George - small church on a city cemetery, the place of burial service and grief. The temple was built from a tree in 1889 from material of the church abolished by Prechistenska. In internal furniture of the temple there are 8 icons pictures from the Passion of the Christ put the 12th cycle, possibly local work written in a realistic manner of the Western European painting.

The house with columns down the street Pioneer, Heinrich Ivanovich Ostrometsky's house (the accountant of city hospital) is known to many kobrinchana. His nephew Romuald Iosifovich Ostrometsky (sir Romek), optician famous for all, witness and keeper of history Catholic Mr. Kobrin's paraffin. 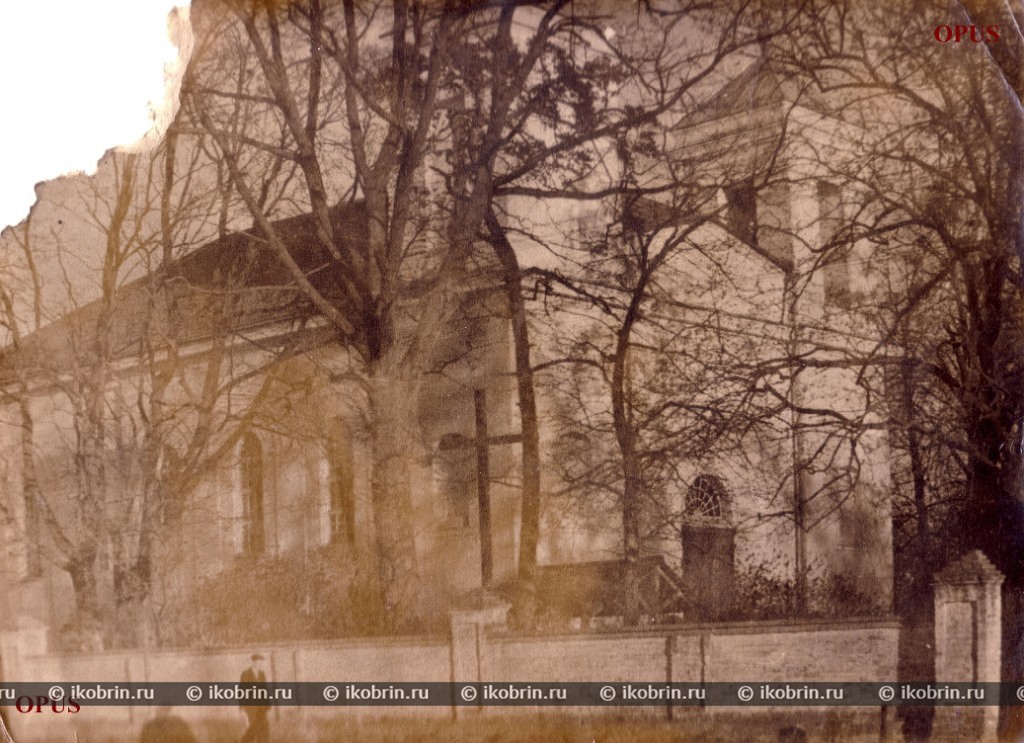 So the church at the beginning of the 20th century looked and was called "Virgin Mary's Heart". 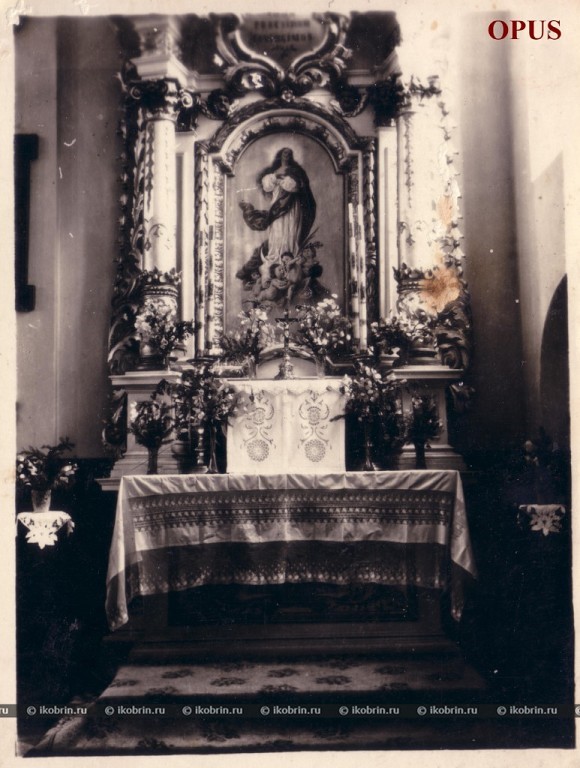 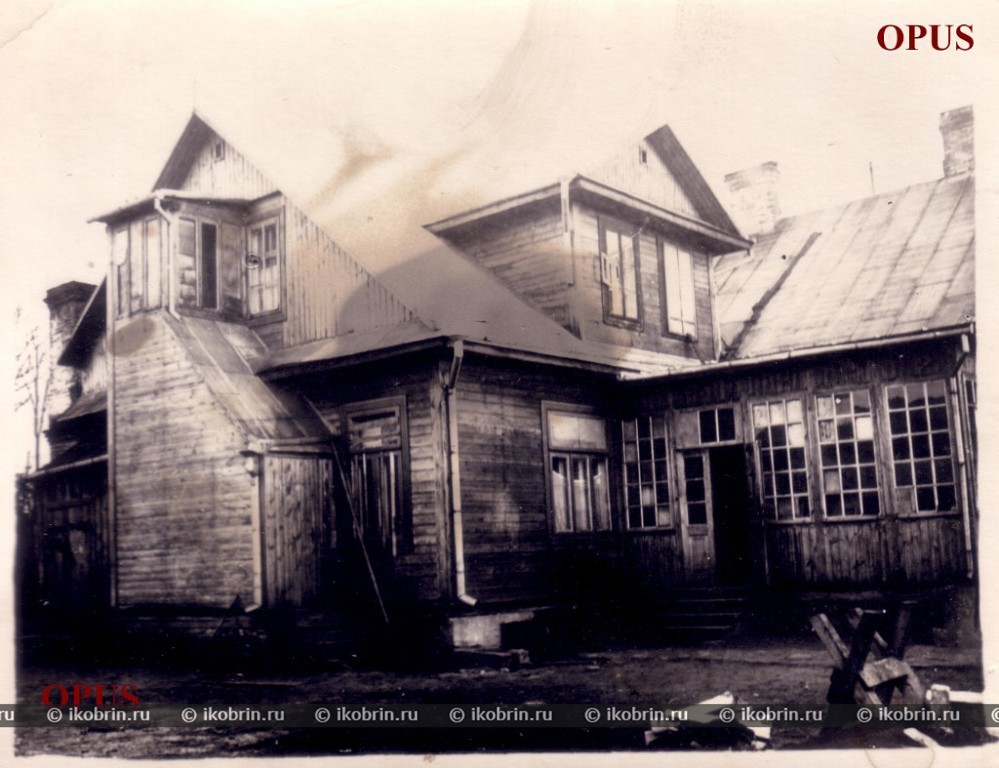 Prior to the beginning of the 50th years of the 20th century near a church there was a small Catholic monastery. 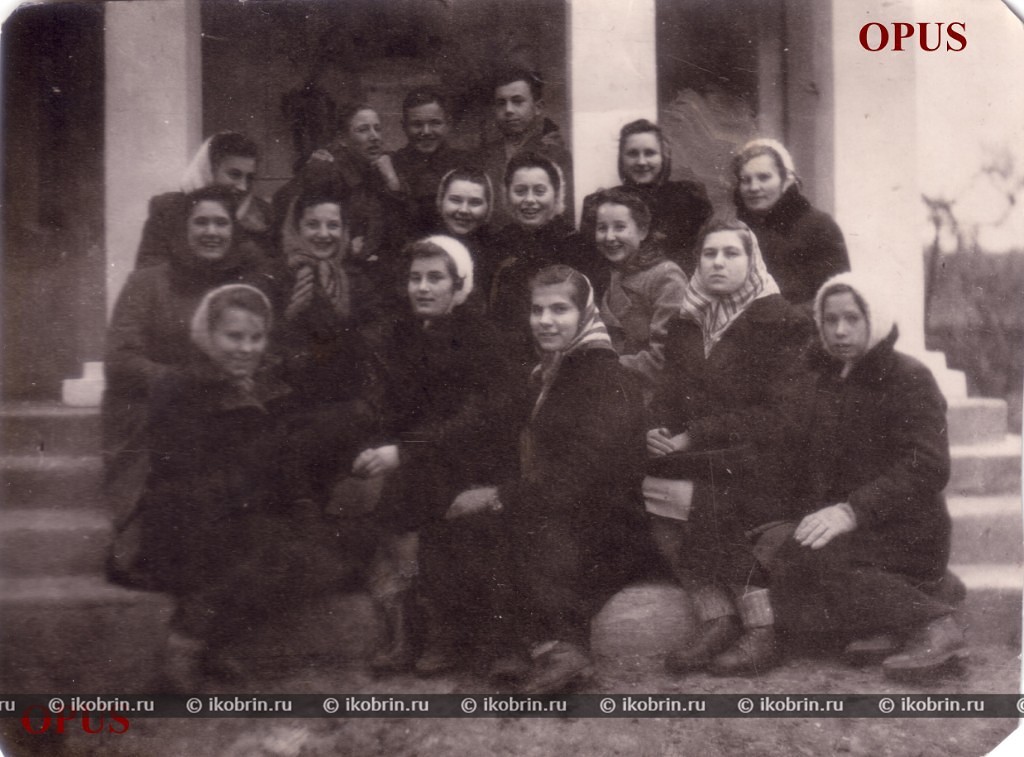 Here and group of the last pupils of conventuals.

Today updated efforts of believers, decorated with a wooden sculpture of Kobrin carvers, the church of an Assumption of Virgin Mary makes the uniform ensemble with a cemetery outlined by a brick protection harmoniously finishes prospect of Pervomayskaya Street. And its majestic two towers are visible because of Mukhovts. 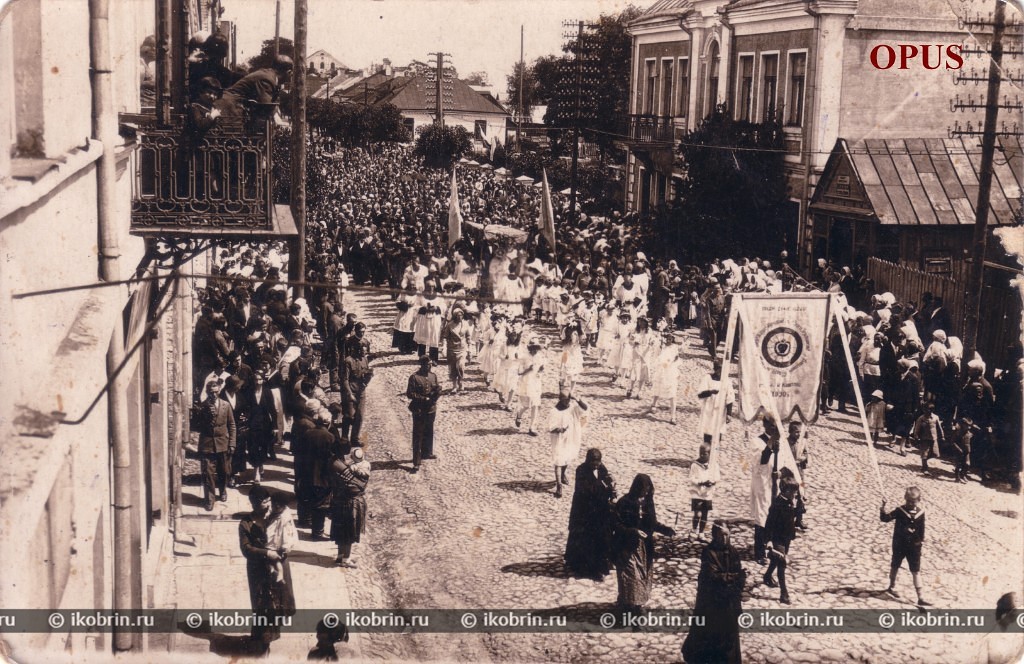 Here and also religious procession of 1930 with banners and banners the ancient and new church in the city of Kobrin celebrates the holiday.

Small cozy Kobrin in the 19th century - within a zone of settled life of the Jewish population was also the typical Jewish town with shanks and trade and craft benches.

After wars the building of a synagogue suffered from alterations under needs of plant of carbonated drinks. But also today the powerful poles organizing a design of the cult building are read by his facades. The synagogue - a monument of stone architecture of the 19th century is under protection of the state. Such is the city of Kobrin and its rich history of cult structures.

However, as if srebrozhemchugam, the city is surrounded with villages where almost in everyone, over an equal Polesia landscape, with typical huts and sheds the church soars in heaven domes.

So, on a seniority, Sacred Church of the Intercession in the village Bukhovichi of 1674. Real architectural pearl. Monument of stone architecture. The structure of powerful walls with two buttresses at an absida combines lines of the temple of a medieval castle with a one-tower church traditional here with niches at an entrance.

Sacred Church of the Intercession in the village October (earlier the Stone Shlyakhetsky) - a monument of wooden architecture with pseudo-Gothic elements.

Sacredly the Krestovozdvizhensky temple in the village the Birch. A monument of wooden architecture with classicism elements.

Sacredly Church of the Assumption in the village of Tevli. A monument of stone architecture with elements of the pseudo-Russian style.

The oldest Ionn Bogoslov's church by orthodox tradition in the village of Cherevachitsa is known since the beginning of the 15th century, now there is a cross, and in a limit of the Kazan temple are huge wooden altar an image of pervosvyatitel.

Sacredly Church of the Intercession in the village Habovichi with the arrival which is conducted on a monastic system the father Alexy, too an architecture pearl now of wooden architecture. All its charm in rotundities zakomar and pro-carved panels is shown here. Svezheokrashenny under five domes the wonderful temple.

The Divinsky church Paraskev is directly connected Friday by the history with the military and historical museum. In an exposition of the museum there is its project model of very difficult work of our artists Barankevich and Zubelevich. Two tower with echoes of a design of churches, church - a monument of architecture of wooden architecture of the 18th century. In furniture a strange carved imperial gate, undoubtedly, local work.

And, at last, the Sacred and Christmas Deiparous temple in the village Povit. A monument wooden architecture in the pseudo-Russian style. This year on October 8 the church celebrated the 100 anniversary at big confluence of believers and guests. The service was conducted by the lord Brest and Kobrin Ioann.

Here and religious procession.
Under evening for Easter
At the ancient monastery
I observe tranquility of water
The river flows and that my years
In silence of the first stars
On lacteal-pink
Shine of heaven suddenly
Clouds - two fishes float
Also thaw in a decline
As a sign of the leaving Christ
They designate?!!

We gathered in anticipation of 2012 between two Rozhdestv the ancient Kobrin updated pokrasivevshy with Dozhinok Novym. We live in the 21st century.

Construction of the Sacred and Rozhdestvennosky temple which will be an architectural dominant on crossing of streets International and Friendship comes to the end. And this work began with the picturesque picture of I.E.Obukhovicha which is stored in the museum. Attention - it is unique, on a cloth future temple about dedication to a victory in the Second World War presented according to drawings and projects since the beginning of the 20th century with disclosure of historical justification of the construction written against the St.George's Ribbon from right to left is represented.