Articles about Kobrin: After Dozhinok

On September 18-19, 2009 in the city the republican festival fair of toilers of the village "Dozhinki-2009" took place. For preparation for so large-scale action about 400 billion rubles (about 144 million dollars) were allocated for reconstruction of city infrastructure and building of new "dozhinochny" objects. 190 houses, 7 schools, 126 km of streets were repaired, the 850-meter embankment, the ice arena, an aquapark, palace of culture, the rowing channel, an amphitheater in Suvorov's park and other objects is built. About 2 thousand builders from the different cities of Belarus were engaged in reconstruction of the city.

During a festival fair the total length of malls made more than 7 km. The services offered over 250 trade enterprises, public caterings and consumer services. Not less than 1200 people took part in sports and mass actions. 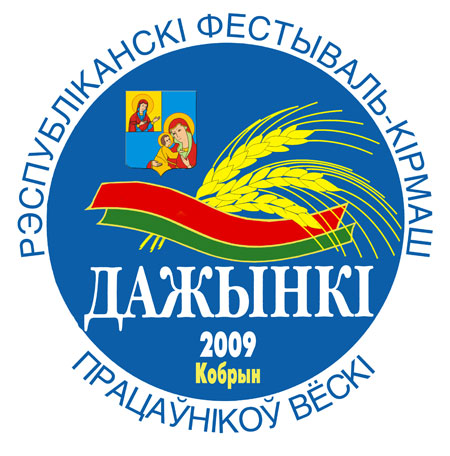 "Dozhinok" to Kobrin, naturally, the aquapark and the ice arena became the most exotic gifts. However, and today the small cities of Belarus not very much you will surprise with them. Therefore designers decided to use them as undertaking, a starting point for further, more large-scale transformations. As a result they became the peculiar rams which cleared away an exit Kobrina to the river.

On the historical truth speaking, this ancient city arose on Mukhavts's coast, having naturally found in it both the defender, and the supporter. But in process of growth forcedly moved away from the river, leaving all decay which became an insuperable right-of-way over time on its coast. With this scab from a hibarok, sarayushka, wastebaskets, not particularly what antiquity of sawmill it was decided to finish thanks to the penetrative force of "Dozhinok".

Among numerous options eventually stopped that allowed normally, in a civilized way, it is beautiful to leave to the river. As a result the uniform platform in the territory of future embankment which, as a matter of fact, and was not was defined. But also after superficial clearing this territory did not please architects. Geological researches depressed: if the ice arena rises rather strongly, then the aquapark gets on the territory with two-meter "occupation layer" of sawdust – as inheritance of former sawmill. And still in addition – to three meters of peat, that is more than five meters of unsuitable soil. Numerous technical councils could not come to a consensus, being afraid of the unpredictable consequences aggravated by not clear hydrotechnical complications. Plus the syndrome caused by catastrophic crash of the Moscow aquapark …

In a word, huge technical problem. It is simple to hammer piles?. There is no such experience yet to use, say, twelve-meter piles which half will be in the unclear environment. How reinforced concrete when rotting sawdust will behave moreover at periodic raising, fluctuation of flood waters? Authoritative capital experts and that were very cautious …

After long reflections in a rigid time trouble replaced an aquapark location. Now it adjoins the city park which also changed and their harmony, spirit is free the flowing space do not raise doubts.

Now both about sawdust, and about initial composition of the embankment know unless the designers regretting for failure of a plan according to which two new large stylish constructions had to unite total area, creating thus unique ensemble.

It is sure, be more time, also the opilkovy puzzle would be solved. Would master also administrative pressure, focusing its considerable resource on a competent, professional solution of complex architectural and town-planning tasks. Winners are not judged, as they say, because the victory is necessary to all. But behind the price for the sake of it, especially today and from now on, it is worth standing. As though approach to unattractiveness and a dullness of our cities – a certain confidential military operation about which it is necessary to know only on the eve of storm. (According to secret-service data, "Dozhinki-2010", passing six hundred-summer Bialowieza Forest, will appear suddenly in Lida.) A lot of things could be made as architectural conductors of a Kobrin festival are sure, both better, and more competently, and cheaper. Therefore, seeing created, you understand that some elements appeared unless from behind a lack of time and creative search on more worthy, stylistically pertinent to the general zodchesky context. Would not begin to use frank "stamping" or "casting" with which even the huge capital is already satiated in the most responsible places.

Of course, does not please also mass application of the same reinforced concrete fences. Their universal expansion, despite attempts of a coloristic variety, disappointingly unifies our small cities. In Kobrin it was succeeded to resist to this tendency partially. The same, say, reinforced concrete, but contrastly another, corresponding to stylistics formo-and a tsvetoobrazovaniye of the ice arena of color became the peculiar white-blue marker noting turn on the embankment.

Nevertheless the new architectural property of Kobrin would not be so powerful if not the experience of an architectural dozhinkovsky harvest season which is saved up by residents of Brest a few years ago in Pruzhanakh ("AIS", No. 6, 2003). After confusion of that time, confusion, all slips when was not to understand who what is responsible for, this time designers chose other strategy. Started Kobrin, as much as possible consolidating practically all design organizations of Brest, all construction divisions involved in large-scale action. "Sphere of influence", a concrete site of work was assigned to each performer, and he entirely was responsible for it, accurately knowing as how to do. Therefore there was no duplication, readdressings, altercations. It was also promoted by compact involvement only of the Brest designers. Did not do unless without the skilled pinsky hydrotechnicians who undertook not the simple embankment.

Their lesson – to others kind science. As, however, and experience all previous "Dozhinok". Residents of Brest, for example, especially were interested in embankments of Orsha and Recyca which also served as an architectural keynote local "Dozhinok" ("AIS", No. 7, 2007 and No. 11, 2008). However it was necessary to take from there not so much the best how many accepted for Mukhavts's coast which are not so high, abrupt and not so steady. As a result the corresponding composition and plasticity of the embankment providing easy access to the river was found. So it is possible to tell: it is architecture not only lands, but also waters. It can quite be accepted a metaphor Kobrin "Dozhinok". It both nonmelting water of the ice arena, and nonfreezing – an aquapark, and the embankment water which is splashed fountains. At last, and now literally, Mukhavts water of life.

So the embankment became, in fact, the largest (after all nearly 400 meters of extent) a new building Kobrin "Dozhinok". Moreover, a lucky creative find, basic and, I will not be afraid of this word, a fatal town-planning event. It actually not only laid the foundation of new linear city park in the floodplain of the river, but also moves to correct the general plan of the city, it is essential to change its spirit and a letter in spite of the fact that it was made rather recently.

This circumstance sets thinking: but not to develop or whether, at least, not to correct to us long-term plans of the small cities taking into account powerful, concentrated in space and time of the financial, creative and even ideological and psychological impulse of "Dozhinok" capable by "a revolution name" at once to finish domination of the become obsolete and becoming obsolete constructions? Here only for this purpose it is required almost impossible – the nobility beforehand rather long series of the dozhinkovsky capitals.

… And still new Kobrin Embankment – as if the bridge thrown in obviously dobrobytny future. By the way, various bridges became a symbolical fruit, an emblem, the business card not only present "Dozhinok", but also all city, its boundless, in fact, prospects. They are recognized in an exterior and an interior of an aquapark, from an entrance to the ice arena. And, of course, on the embankment – the lungs which are artistically curved, almost Venetian. (Frightening, however, to go into the humidified and artfully brilliant tree of their scaffold.) They already reach for other coast which with courteous patience waits for the, now, judging by the begun works and inspired intentions of kobrinets, short turn. Also welcome as a beacon, a leader of "Dozhinok" – the ice arena – its palette.