Treats fishes of family of Karpov (Cyprinidae). In Belarus it is widespread in all rivers, inundated reservoirs and lakes. The general coloring of an ide darkish, with golden outflow, a back and the top part of sides, up to a sideline, dark blue, lower - whitish, a belly silvery. Back and tail fins dark, occasionally reddish, other red. Young ides have lighter coloring, fins are much more pale, than at adults. 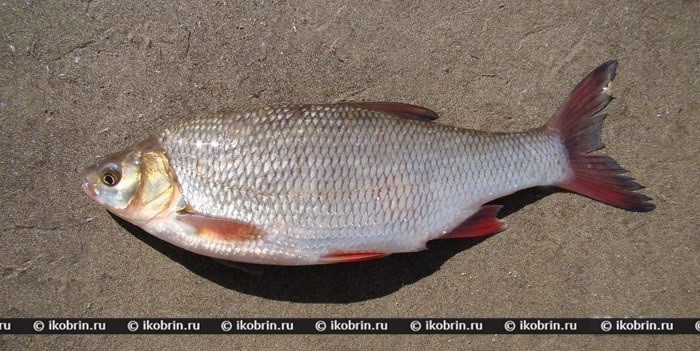 The ide concerns to the fishes showing active activity during the whole year. Molod sticks to an ide in reservoirs small flocks, large lead a single life. In the rivers lives mainly on flat sites, adheres to deep creeks with the quiet current, avoids the rivers with a rapid current and cold water. Comes into inundated lakes, staritsa, flowing lakes with clear water. Prefers sites with the clay, slightly silted soil.

Become Polovozrelymi on the 4-5th year of life, with a length of bodies about 25 cm of Ikrometaniye single, occurs very much early, almost at once after a pike when water temperature rises about 5,5 °C and above that in the conditions of Belarus happens at the end of March - the beginning of April.
The ide is among valuable srednerastushchy fishes, intensity of its gain does not decrease up to 8-9-year age. Separate copies can reach 70 cm of length and 6-8 kg of weight. In ulova fishes weighing 1-1,5 kg are usual. In the first years of life the linear sizes increase by 5-6 cm and are slowed down only from 5-6-year age.

The ide has quite essential trade value, however ulova are considered by its statistics is incomplete, the small ide joins in meloch group. According to trade statistics, the considered catch of an ide in reservoirs of Belarus to the middle of the 60th years reached 375 centners, or about 1,5% of the general catch of fish from natural reservoirs. In recent years ulova decreased, make about 75-200 c a year. Prospects of use of an ide trade, undoubtedly, are more considerable.

Possessing quite high growth rate and taking the habitats isolated from other types, the ide has to take higher place in fishery. It has essential value also as object of amateur fishery.