Kobrin military and historical museum of A. V. Suvorov 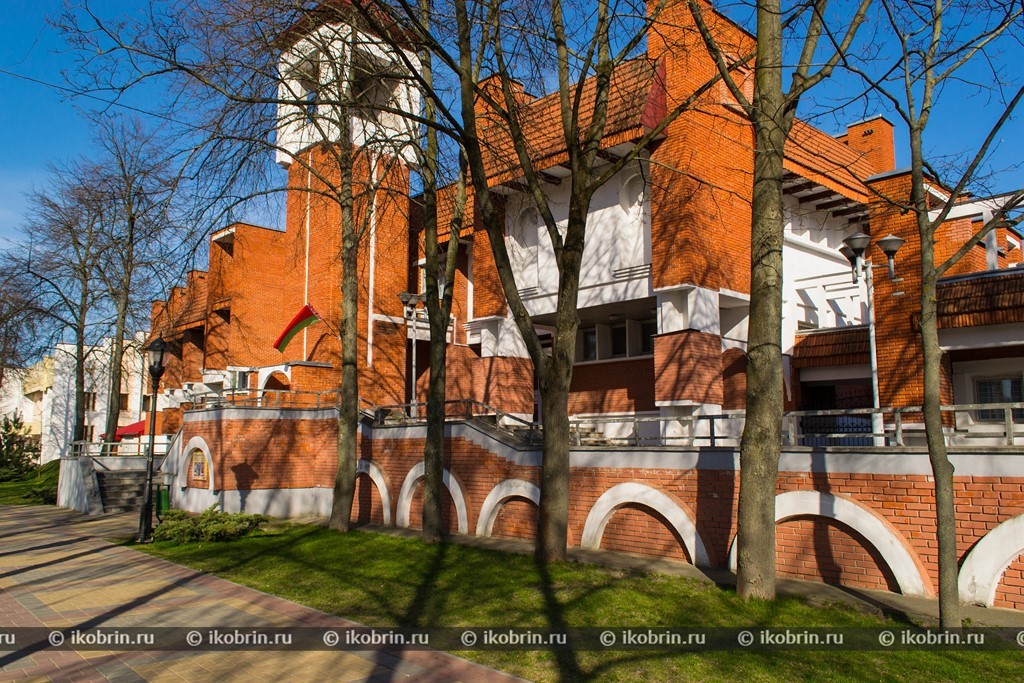 The Kobrin military and historical museum of Suvorov was founded in June, 1946 in the house which in the 18th century belonged to the great Russian commander and where he lived in 1797 and 1800. After Suvorov's death the house repeatedly changed the owners. The building gradually decayed, but even centuries did not make on it such destructive impact to what it underwent in the years of fascist occupation. In July, 1944 before the soldiers freeing the city only the building skeleton with the warped walls and a shabby gontovy roof appeared.

The house was restored and at the same time exhibits gathered. Alexey Mikhaylovich Martynov was the first director and the only employee of the museum at that time. Opening of the first exposition in the Suvorov house took place on May 1, 1948. Five halls of the museum had three sections: "Our great ancestors", "A. V. Suvorov" and "Patriotic war of 1812".

By the beginning of the 1970th the Kobrin military and historical museum occupied the space of 385 sq.m. Military history of the Russian state since X century was reflected in the exposition placed in 16 halls and finishing with the period of the Great Patriotic War. Six halls were devoted to life and A. V. Suvorov's activity. Popularity of the museum grew. By 1977 attendance reached it 130 thousand people a year at population of the city in 27 thousand people. By this time rich collections kolodny and firearms, numismatics, regimentals and equipment of the Russian army and armies of those countries which in various times opposed the power to the Russian state were collected. 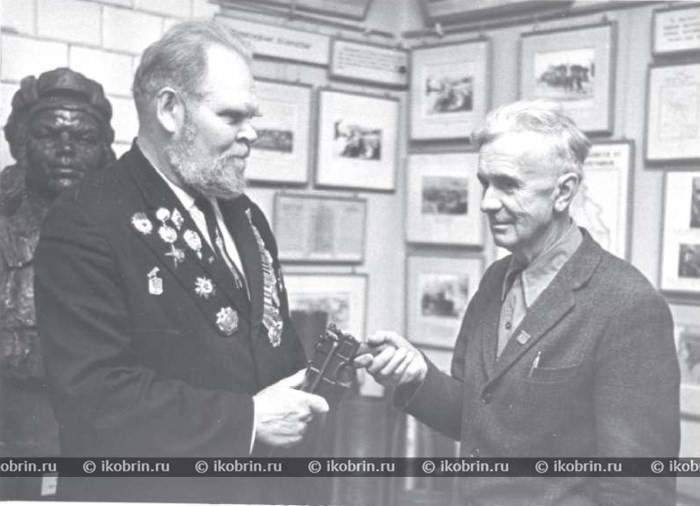 In 1978, in connection with retirement of A. M. Martynov, Nina Mefodiyevna Plisko is appointed the director of the museum. The same year the museum was closed for restoration works. The building was completely reconstructed. According to the found documents and oral certificates it was succeeded to recreate former planning partially. Unfortunately, the plan of the house of the 18th century did not remain and to restore all building in its original form there is no opportunity. When dismantling the house in one of its rooms designs of a figured arch were found. Restorers restored an arch and now it divides an exposition of the first hall into two parts. In one of rooms again as in Suvorov times, the fireplace appeared.

On November 15, 1980, to the 250 anniversary since the birth of A. V. Suvorov, the exposition in the Suvorov house was reopened for visitors. Now it was devoted only to life and activity of the great commander. As the profile of the museum was defined as military and historical, collecting exhibits was conducted purposefully in two directions: objects by means of which it is possible the reflections of events of life and A.V. Suvorov's activity i.e. limited to time frames of the middle end of the 18th century and the objects concerning military history of ancient Russia-Russia-USSR. First of all the weapon, regimentals, equipment of the Russian army and armies of those states with which military operations in the territory of Russia and beyond its limits during the period were conducted with XVIII on the head of the 20th century was bought.

Much attention when completing funds was paid also to documentary material. It should be noted one more important direction of completing of funds of the museum to which much attention was paid. It is about collections of numismatics and a faleristika. Exactly thanks to the fact that coins, awards, medals and signs of distinction are always attached to certain eras and separate events they were of considerable interest to the museum. In the first years of existence of the museum relations with the central museums which had rich collections of numismatics and thanks to their kind arrangement to recently created museum were established, it was succeeded to collect a numismatics collection, not perfect, but rare for the regional museums. The close contacts with veterans of war come further helped collecting a collection of awards and medals of the period of the Great Patriotic War.

The museum of Moscow, Leningrad, Minsk and many other museums were the main sources of completing of museum funds central. Close contacts with secondhand and antique shops, owners of private collections were come. Most often through them rare books of the 18-19th centuries, documents, engravings and lithographs were acquired. During the 1950th - the head of the 60th the foundation of those collections which continued to gather further on an extent of the next years were laid. The most part from etik exhibits was included in the exposition of the museum operating since 1948.

In 1990 construction of the new building of the museum where in several years registration of the second part of an exposition began was finished. As the exposition of the memorial Suvorov house remained former and is devoted only to life and Suvorov's activity, and the saved-up material allowed to consider much more wide range of subjects, the basis of a new exposition was formed by city history in the context of military history IX-XX of Belarus of centuries though the narration begins since settling of the territory of Belarus by the person and is based in this section on archaeological material. To the 50 anniversary of the Victory over the German fascism the exposition in the new building was open. Veterans of the Great Patriotic War, city heads, museum workers from Minsk and St. Petersburg and other guests took part in opening of an exposition.

Thus, today the Kobrin military and historical museum is presented by two expositions, one of which is placed in the Suvorov house which is a monument history of the 18th century of republican value, and the second - in the new building of the museum. In 2006 the museum celebrated 60-year anniversary.

According to a military and historical profile, from the date of foundation of the museum collecting exhibits was conducted purposefully in two directions: objects by means of which reflection of events of life and A. V. Suvorov's activity, and the objects concerning military history of ancient Russia - Russia – the USSR is possible were selected. The largest museums of Moscow and Leningrad became the main sources of completing of museum funds. First of all collections of the weapon, regimentals, numismatics, documents and the fine arts were completed. During the 1940th – the head of the 60th the foundation of those collections which continued to be replenished further with new exhibits were laid. The great interest was shown to collecting local history material, and from 1980th the museum conducted completing of funds non-core ethnographic materials. Thanks to them with input in a system of the new building the possibility of creation of ethnographic exhibitions appeared.

Today funds of the museum make about 51 thousand museum objects from which about 23 thousand units – objects of fixed assets (2009). Funds are divided into 20 collections. In each of them there are unique objects. As the basis of expositions is made by collections of the weapon, regimentals, numismatics and the fine arts, will give the most interesting and rare objects from these collections.

Weapon collection: a zatynny wick arquebuse of the 16th century, wick and kolestsovy guns of the 17-18th centuries, a two-handled Western European sword of the 16th century, the Polish sabers with east blades of the 17-18th centuries, the Tula silicon guns of 1813, the first kaznozaryadny guns of the middle of the 19th century, the gun Mauser of the Head of the 20th Century., Maxim's machine gun of a sample of 1910 and the German machine gun of MG of a sample of 1915, Shpagin, Sudayev, Shmaysser, Thompson's submachine guns of the period of World War II.

From objects of numismatics it is possible to note the ancient Polish coins of the 16-18th centuries found in the territory of Kobrin district as a part of treasures; coins of Russia of times of Alexey Mikhaylovich, Peter I and Catherine II. Besides, as a part of funds is several objects belonging to the Russian emperors. The collection of the fine arts includes works of the Belarusian artists S. Romanov, V. Stelmashonk, A. Shibnev, E.Tikhanovich, I. Rudchik, P. Drachev, etc.

In the museum the constant exhibition sale of works of Kobrin artists and souvenirs works.

The next exhibitions are offered visitors of the museum: "Tsuda Belarusi"; "Victory Weapon"; "Historical and cultural heritage of Kobrin district". 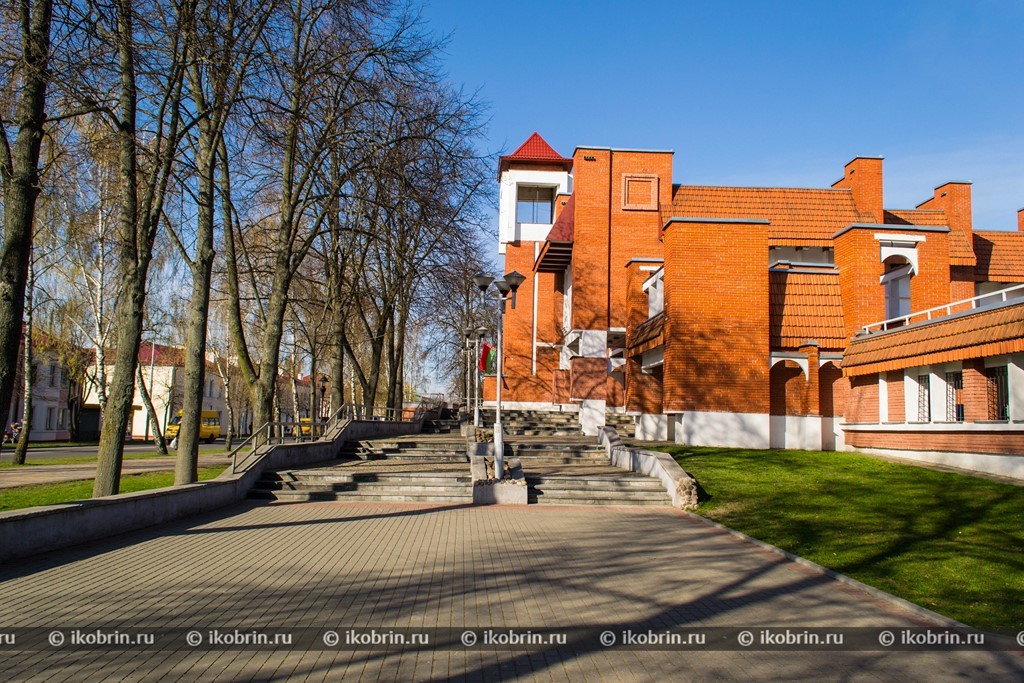 New building of the museum 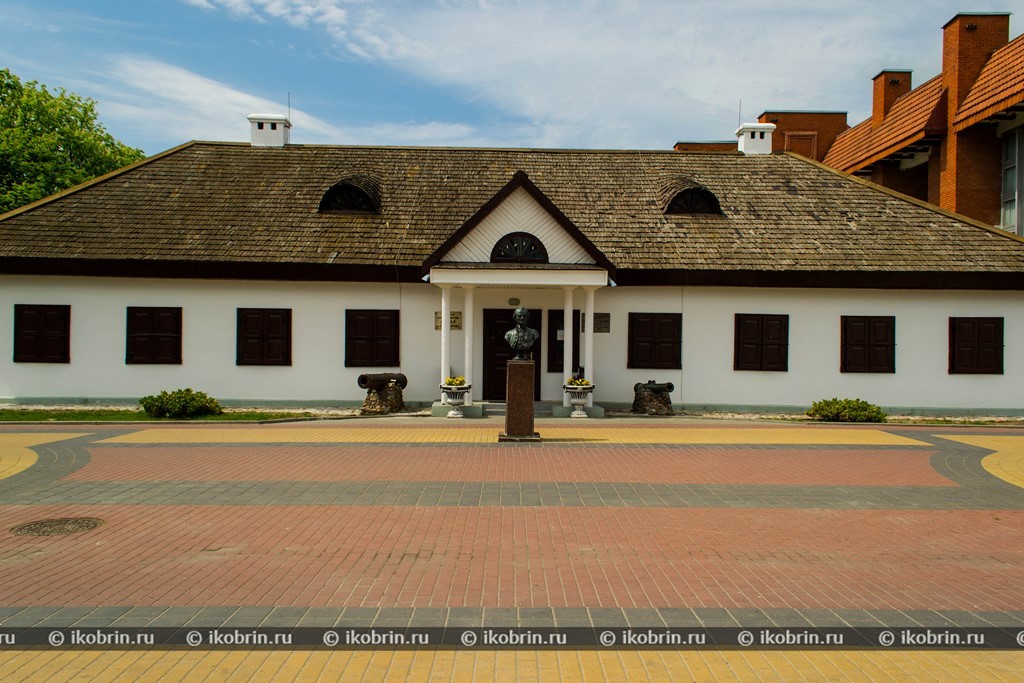 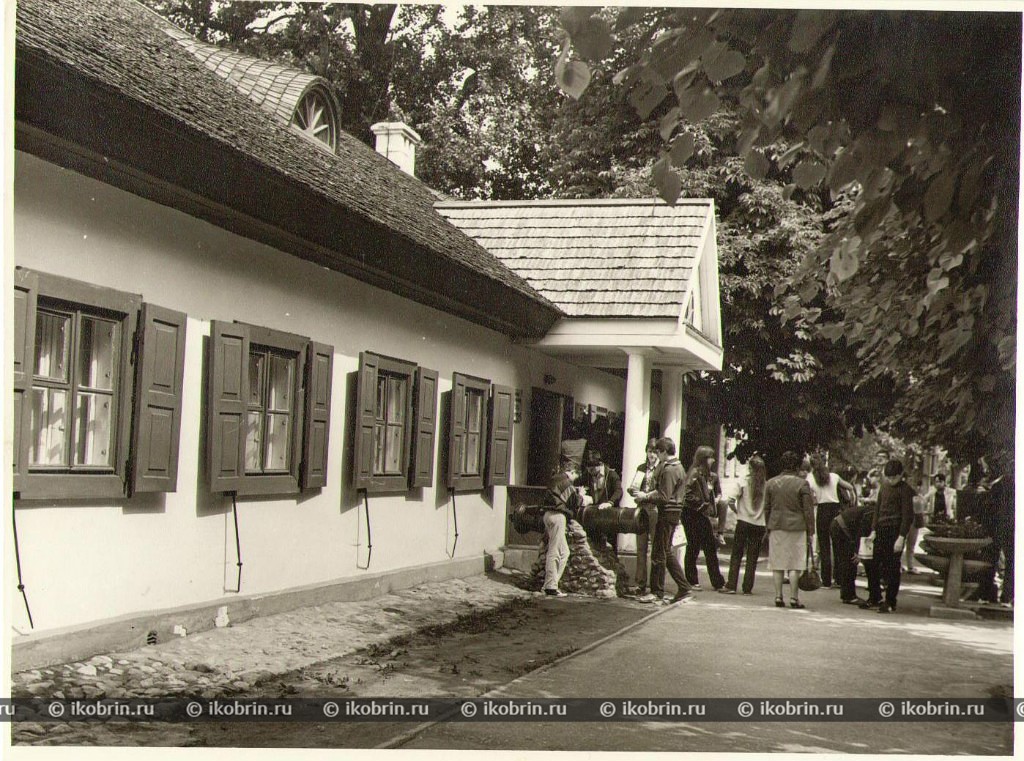 "Seven centuries Kobrina" (15 halls) formed city history in the context of the military history XIII-XX of Belarus the exposition basis centuries. The exposition is presented by the original materials narrating about centuries-old history of Kobrin: emergence and first annalistic mention; periods of blossoming of the city and its decline; time of peaceful life and weight of military tests. Continuation of an exposition is the open area of military equipment on which the artillery piece and samples of armored machinery of the Soviet Army are presented.

Sections of an exposition: 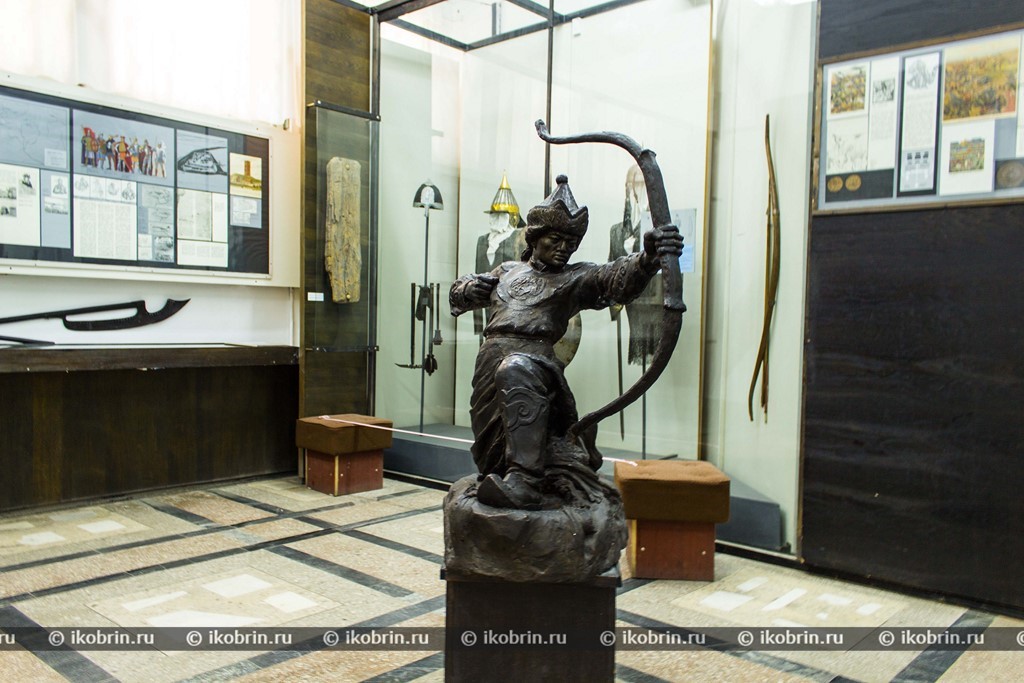 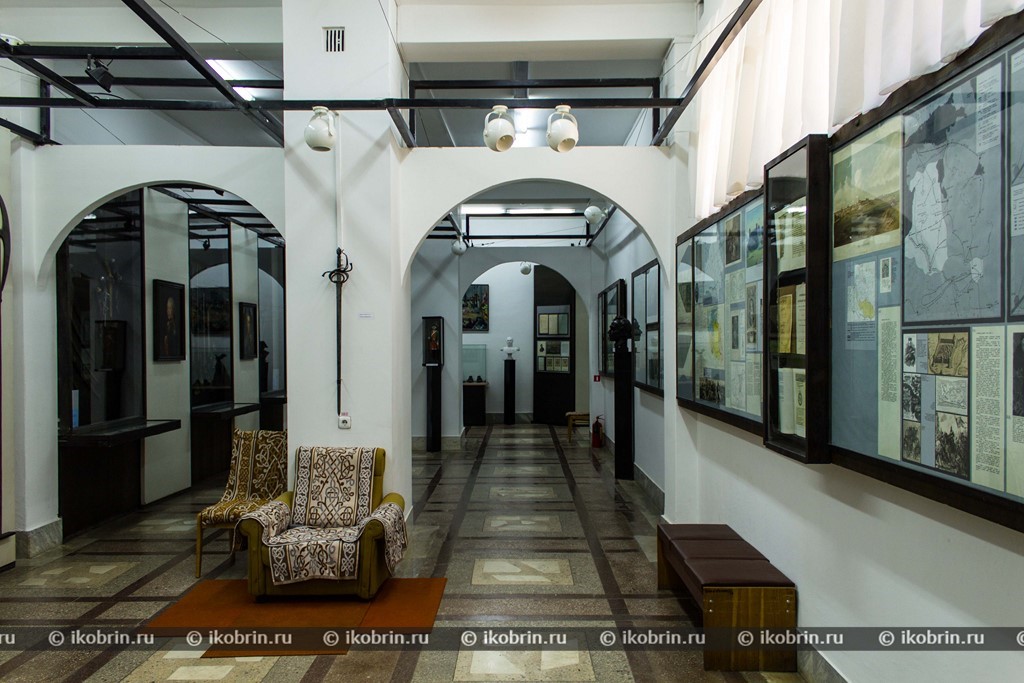 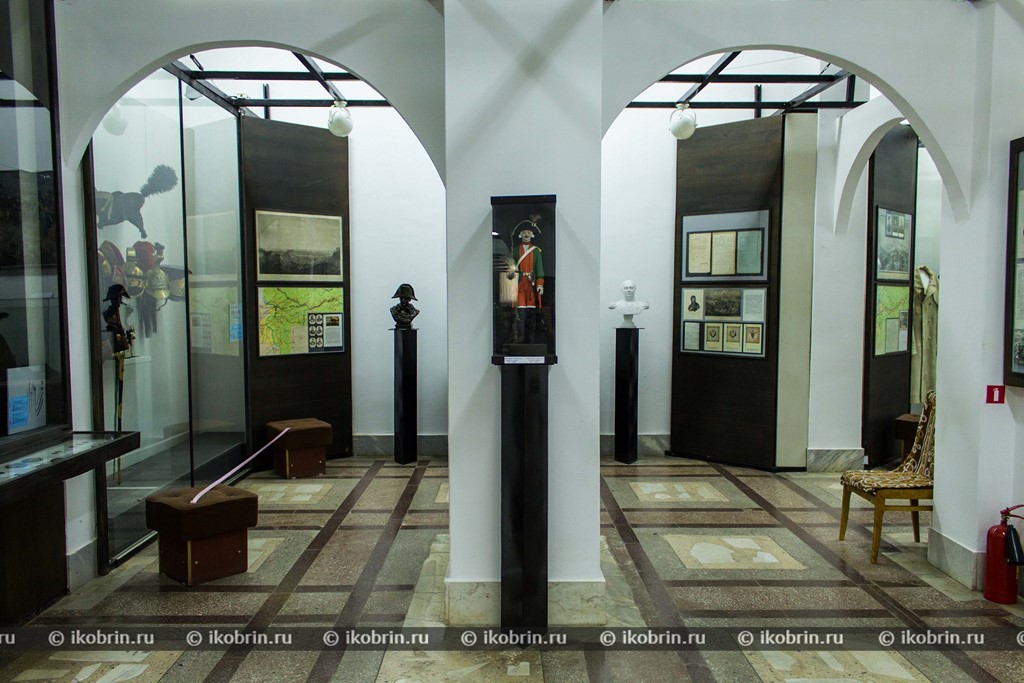 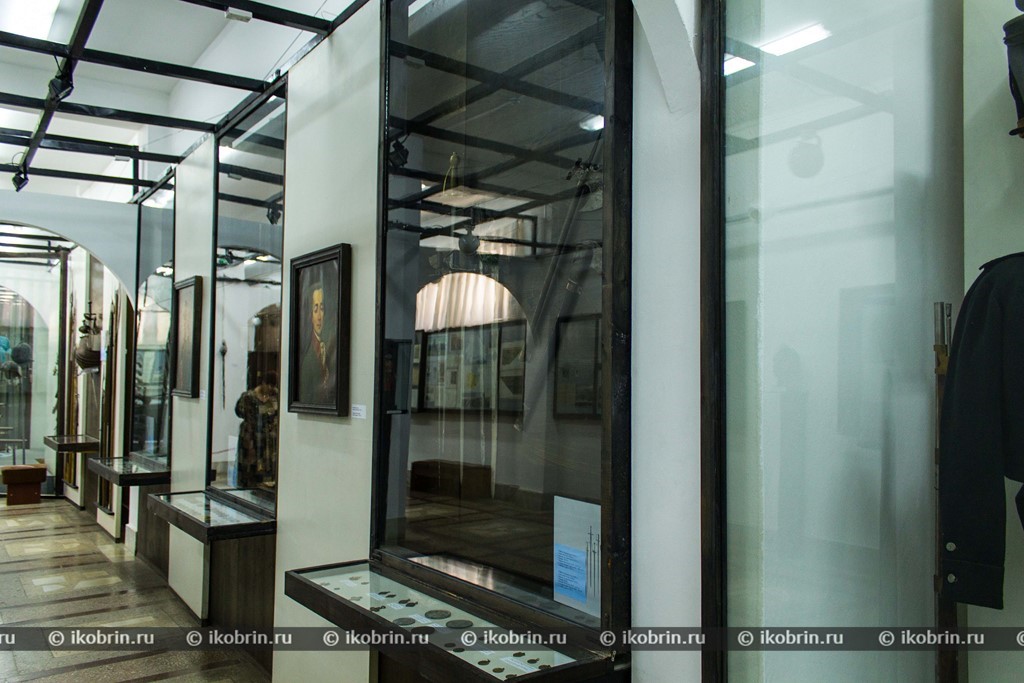 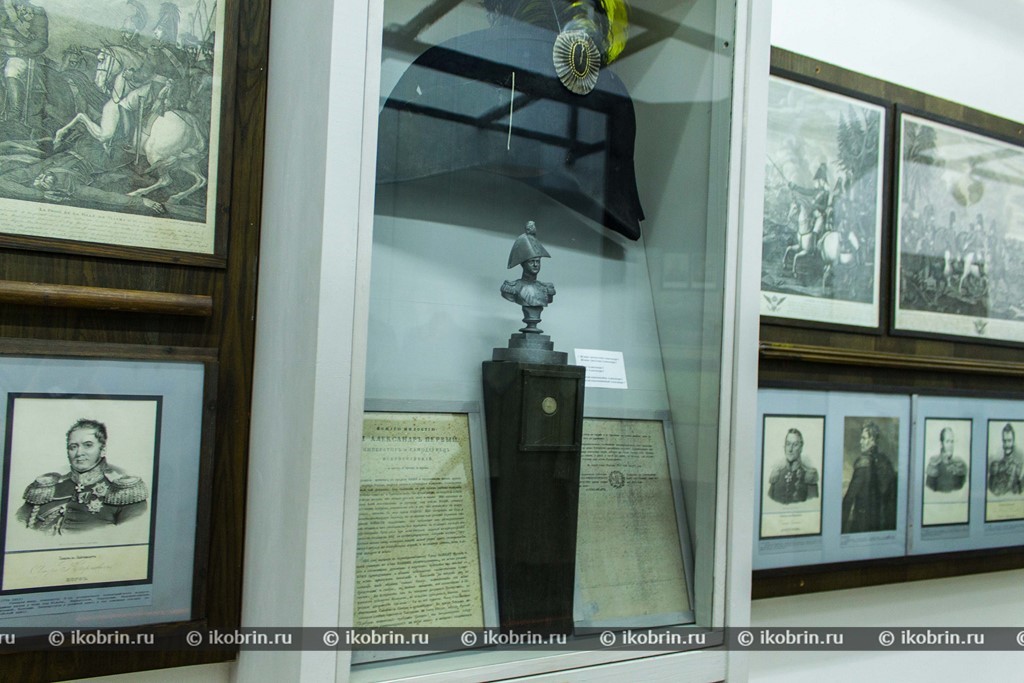 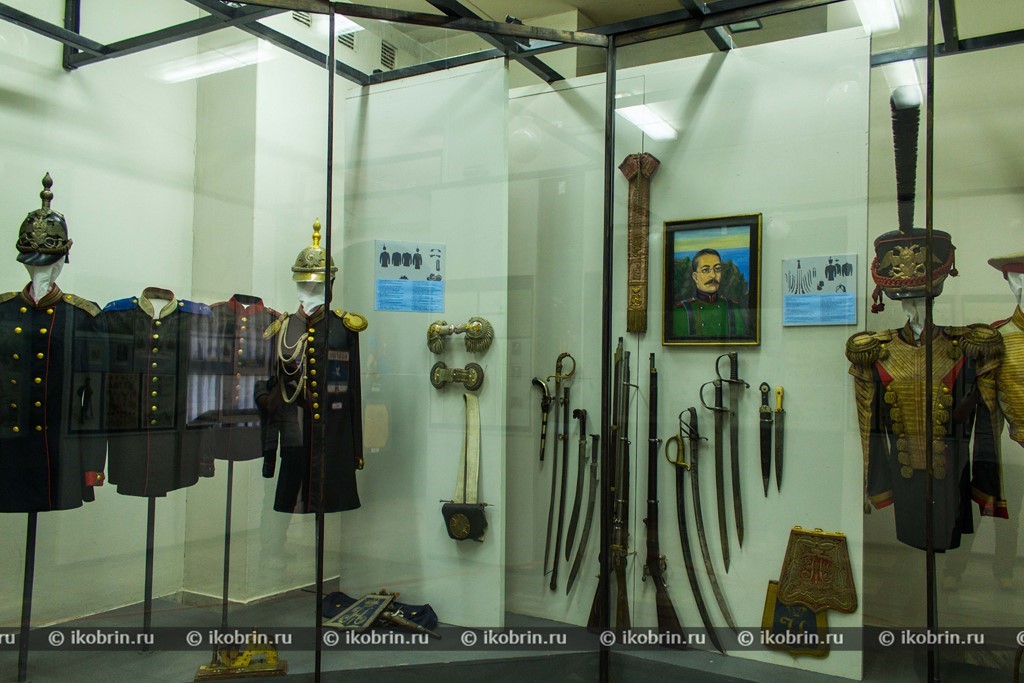 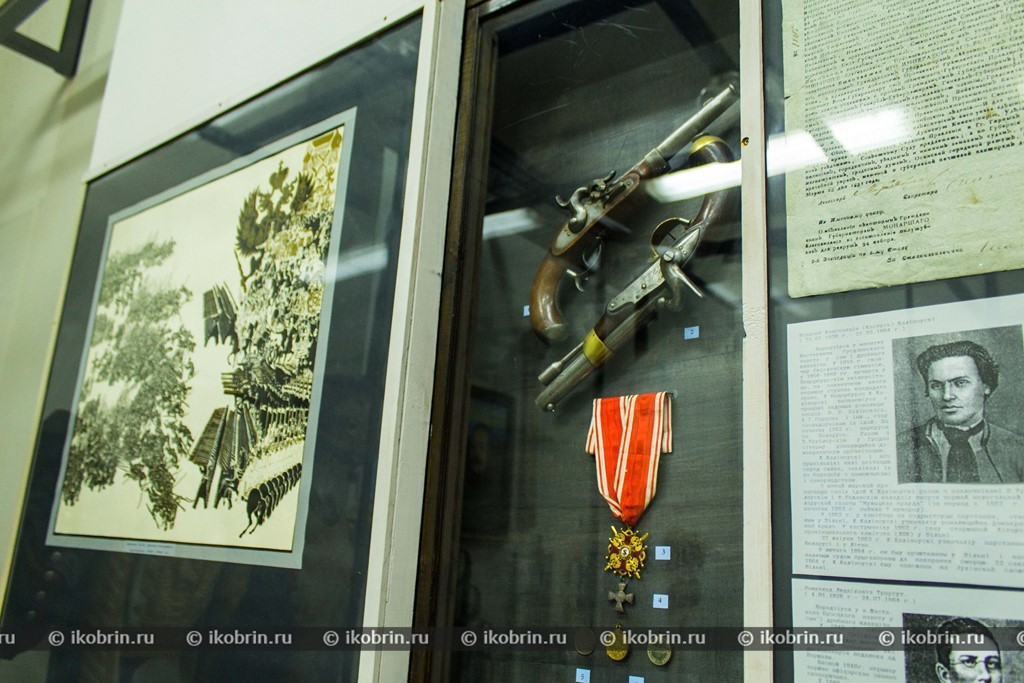 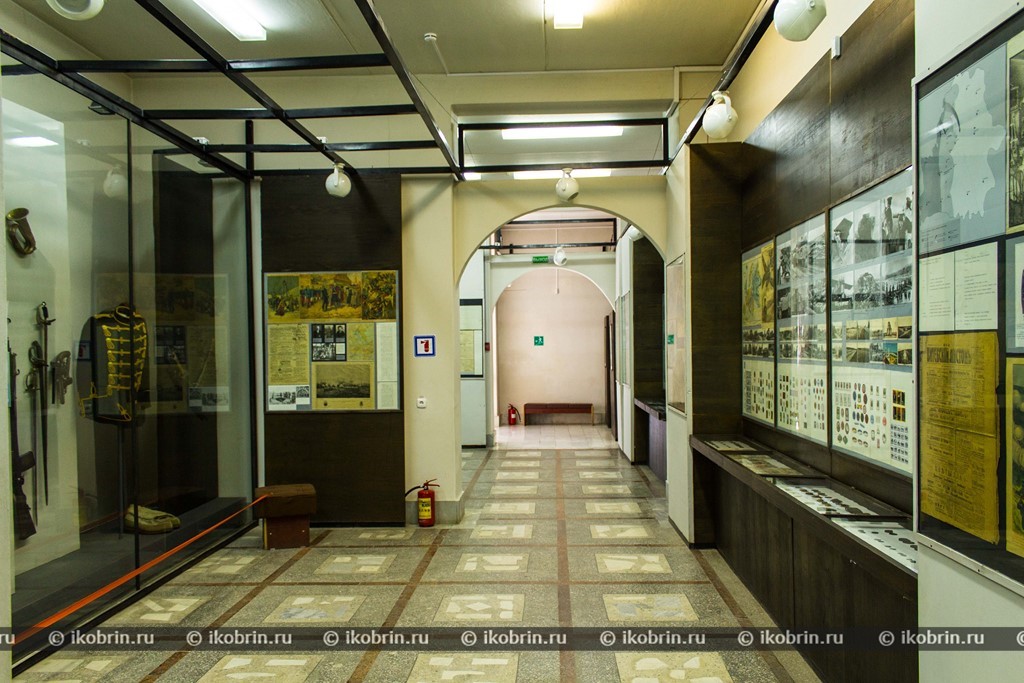 It is interesting to read