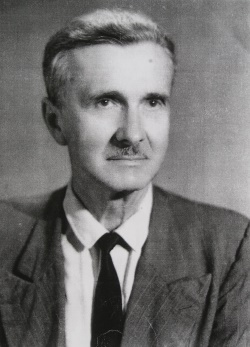 Each city has treasured names which are never forgotten. They as stars in a sky, shine long and generously, light a historical way to people, being a model of service to the Fatherland and the neighbor. For kobrinchan Alexey Mikhaylovich Martynov became such such guiding star.

His life confirms Goethe's aphorism: "Talents are formed at rest, and characters – among everyday storms". Both first, and second on a course of life of Alexey Mikhaylovich Martynov of ninety five years there was quite enough. He endured two world wars, personally saw in eyes of the last Russian emperor Nicholas II, witnessed emergence, blossoming and decline of the huge state – the USSR. His life was not rich with outstanding events of global scale, however at each zigzag of destiny there was only one passion – to create which made him the most famous and dear person in Kobrin district.

Alexey Mikhaylovich Martynov was born on August 7 (on August 20 on new style) 1904 in the city of Kobrin in a family of the national teacher Mikhail Yakovlevich Martynov and Paraskev of Antonovna, nee Pisarevich. Since the earliest childhood endowments of the boy had a natural and fertile exit. Since 1911 the child is alienated to study in Kobrin parish school, but in connection with military operations of 1915 study was interrupted, and the family was evacuated to the city Rogachyov of the Mogilev province. There Martynov continued the doctrine in real school. In 1919 his father was appointed the manager of school in the village Gorodetsky's Device of the Village Council. In this village in the winter of 1920 - 21 Alexey Mikhaylovich became the teacher of school of an educational program, and since March, 1921 worked as the teacher in the village of Nikolaevka. In May, 1922 suddenly the father died of a stroke on the 65th year of life, having served the teacher of 49 years. Paraskeva Antonovna decided to come back to Kobrin where parents had a wooden lodge with a personal plot. Here A.M. Martynov worked as the unskilled worker mainly at seasonal works and at timber mill, then was engaged in gardening on a personal plot. The care of mother and of younger children, constant strained circumstances did not allow the young man to go to study further. But the aspiration to become competent was so strong that he was engaged in self-education and very succeeded in this field. Its interest and hobbies were exclusively wide, covered different fields of knowledge and arts. Alexey Mikhaylovich independently studied and well knew English, French, German, Polish and Ukrainian languages, mastered Esperanto. Besides linguistics was fond of reading works of classics of the world literature. Independent first attempts at writing crowned emergence of a number of curious stories and the story "Lord of the World" which became attempt of the author to state the philosophical outlook. Correspondence with the Russian writers and publishers living in emigration in countries of Western Europe testifies to gravity of interest in literary work. Mikhail Artsibashev, Mark Aldanov and Mikhail Osorgin's letters remained. There was a message and from Ivan Bunin in whom the great writer, having seen in Martynov of grain of talent, recommended to it not to give up occupations by literature, but at the same time advised to have stabler source of the income. The love to this art form stood out through all career of Alexey Mikhaylovich Martynov. In his house the richest library of unique books remained, walls decorate portraits of favourite writers and poets. The literary and publicistic heritage of Alexey Mikhaylovich impresses readers also today, and a peculiar style of a statement of material does not leave doubts in authorship.

The talent is always many-sided, not the last place in a wide range of hobbies was taken by drawing. In family archive the original pencil portrait and historical sketches striking with the accuracy of the image and the noticed character meet. These miniatures convince us of validity of desire of Mikhail Yakovlevich Martynov to send the son to study in the St. Petersburg art school. But wars and revolution followed ways to dream.

Musical taste was created under the influence of national songs, Alexey Mikhaylovich liked to listen to them and to execute. In Soviet period was fond of Vladimir Vysotsky's creativity probably having seen in his rebellious spirit the accord with own destiny.

Martynov perfectly knew world history and history of Kobrin district. Not without reason its articles became the primary source on studying and judgment of the native land. It had some unusual interest in all surrounding. There was no such question which would take it unawares. He could communicate with people of any intellectual level, struck interlocutors with the erudition though had no diploma about the higher education.

After reunion of the Western Belarus with BSSR in 1939 Alexey Mikhaylovich was attracted for work in Temporary management of the Kobrin County to adjust a communication service, then he began to organize city library which manager he worked till the beginning of war.

During occupation Martynov managed to avoid compulsory mobilization for work to Germany. Since May, 1942 worked as the storekeeper and the tinman in civil engineering firm. Then with assistance of the former underground worker at belopolyaka Aleksey Qureshi became coherent guerrilla group of Chapayev, supplying guerrillas with materials necessary to them from a warehouse. Subsequently performed the prospecting tasks in the back of the enemy received from the operative of guerrilla crew of Chapayev of S. I. Shmyrev. He risked life when he, thanks to the literacy and observation, on the instructions of a staff of Red Army plotted the hometown an arrangement of enemy pillboxes, earth-and-timber emplacements, anti-tank ditches and military connections of the opponent.

Right after exile of Hitlerite invaders on the instructions of a bedding set district committee Martynov restored work of city library, and in November, 1944 was called in ranks of the Soviet Army. Served as the clerk in a row of art parts. After demobilization about a year worked as the technician-inventarizatorom. And since August 4, 1946 it was appointed the director of the Kobrin military and historical museum of name A.V. Suvorova. For those times it was unusual appointment. It is known that the party, especially on posts in the field of ideology, put communists, in rare instances – perspective Komsomol members. But Martynov was not and did not become either that, or another, and life proved that the power was not mistaken in "the non-party Bolshevik".

Alexey Mikhaylovich got Suvorov's lodge in quite deplorable state. Fascist invaders used it under a stable, having closed elementary Ukrainian school. In July, 1944 before the soldiers freeing the city only the building skeleton with the warped walls and a shabby gontovy roof appeared. Locals nearly sorted a structure on fuel, but thanks to efforts and Martynov's enthusiasm the lodge not only escaped, but also became the business card of Kobrin, gained fame outside the republic. Thirty two years Alexey Mikhaylovich was on "the captain's bridge" of the museum, giving himself to favourite business, investigated the historical past of the hometown, wrote more than seventy articles, was published in republican and local press organs. Visited a number of the countries, more than in hundred fifty cities of the world, used the got data and exhibits for replenishment of the museum. When kernels for guns of far Suvorov times were found in the city of Izmail, the director of the museum brought them in suitcases. It delivered the invaluable weapon of the eighteenth century from Leningrad, carried it in a holdall in the general car of the train, having put under the head instead of a pillow.

From 1965 to 1972 Martynov on a voluntary basis headed Kobrin office of volunteer society of protection of historical and cultural monuments. It not only worked on preservation of the existing monuments, but also initiated work on perpetuating of the places connected with historical events in the territory of Kobrin district. In 1974 to the thirtieth anniversary of liberation of Belarus, at the initiative of Alexey Mikhaylovich and with his direct participation twenty four obelisks with the memorial boards devoted to events of the Great Patriotic War were established.

On its initiative in 1948 in Kobrin the name A.V recreation park was based. Suvorov whose first director Vasily Ivanovich Haritonyuk was a close friend of the colleague. Thanks to vigorous activity of A.M. Martynov in 1950 in Kobrin two busts of Suvorov, and in 1964 – a monument to A.V. Suvorov of work of Chebotyrev were established. Alexey Mikhaylovich did a great job on establishment of date of the first written mention of the city of Kobrin, and in each business he put heart and soul and heart.

Martynov, despite of load, continuous employment, managed to get acquainted with world-class sights, he visited the Hermitage, Tretyakov gallery, and even visited Louvre. Admired works of art, historical monuments which he was lucky to behold, but exhibits of the Kobrin museum were more expensive to it. He to the smallest details knew history of each small street, each ancient house, without suspecting that, gradually became the keeper of history of the city where was born, grew up and took place as the personality.

Already being on pension, Alexey Mikhaylovich, despite age, did not reduce rates of activity on the chosen way. On controversial issues of history to it addressed, as to a peculiar information bureau.

The high intelligence, diplomacy, ability to objectively estimate possibilities of each person, tactfulness in communication, subtle humour, and at times and delicate irony, attracted to it people. It never offended anybody and did not humiliate. The inherent modesty did not allow Martynov to ask for itself and for itself. But, if it was necessary to ask, or to resolve an issue for the benefit of common cause, equal to it was not.

Alexey Mikhaylovich quietly treated material benefits. He felt need only for air and books on which a half of a salary left. When with approach of commodity hunger and together with it a spiritual impoverishment people sorted from shops necessary and unnecessary, Martynov diligent dug in bookstore, filling up the library.

He did not attach great value to appearance of the person, for it more important role was played by soul, but not a cover. Alexey Mikhaylovich had many supporters among whom it is necessary to call his namesake of Alexey Mikhaylovich Sushchuk. Friends mutually supplemented each other, despite different temperament and polarity of views.

Martynov, following Suvorov tradition, strengthened spirit, tiring a body. Very few people knew that, having got sick with tuberculosis of lungs at thirty-year age, he recovered independently starvation. The yoga and swimming became an obligatory element of his life. As the only vehicle on city streets, and till last days lives, served the bicycle.

Alexey Mikhaylovich Martynov died on November 15, 1999. For active local history work it is awarded by a medal of N. K. Krupskaya, a set of diplomas, nominal gifts, was an honourable citizen of Kobrin. But the best award – kind memory of it in a fit of temper kobrinchan. The library and its main thing a child – the museum of name A.V prosper in the city of establishment of communication. Suvorova.

By century since the birth of A.M. Martynov our museum took the initiative to call one of new streets of Kobrin his name, and on the house number 39 down the street Red Army where there lived Martynov, to establish a memorial board.

The river of time rolls the waves. Does not hurry – ahead eternity. Also pass human destinies along its coast. Someone's life flows quietly and imperceptibly, and a trace of others so we mean that their destiny, the light image is interwoven into history forever.