Ryboobrazny chordate animals of group of minogoobrazny. The body extended, worm-shaped, without scales. Have 2 back and tail fins. On each side the heads on 7 branchiate openings. A mouth — a round prisasyvayushchy funnel with horn teeth. Have pair of well developed eyes and an unpaired parietal eye. Differ from fishes in lack of the isolated jaws and existence of a cartilaginous chord. Development with metayomorfozy. Larvae (so-called peskoroyka) worm-shaped, toothless, with nerazyovity eyes, live 4-5 years.

There are several types of the lampreys differing with morfofiziologichesky features and a way of life. Belarus is known a lamprey ruchyevy European (L.planeri) and a lamprey Ukrainian (L.mariae). 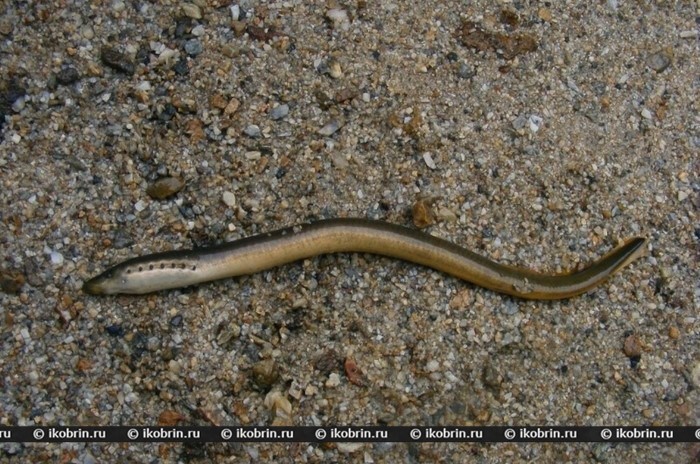 The lamprey ruchyevy is a fresh-water form of a river lamprey through passage widespread on the coast of the Baltic and Northern seas and entering the rivers for an ikrometaniye. The lamprey ruchyevy inhabits the rivers and streams of the same pools, but never puts out to sea and does not make long migrations. Meets in the basins of Upper Danube and the top Volga where got, apparently, into postglacial time from the basin of the Baltic Sea. In Belarus lives in the rivers and streams of basins of Zapadyony Bug, Neman and the Western Dvina.

Adult forms of a lamprey ruchyevy meet only in the spring, during spawning, on sites a rapid current and a stony bottom where they skapyolivatsya sometimes in large numbers. The general coloring of a body of a lamprey ruchyevy from dark gray to dark brown with the casting metal gloss, a paunch whitish. Roth is seated by mnogoyochislenny horn teeth: on the top lip plate of 2 tooth, stupid in the form of small horn swellings, on lower - 5-7 same stupid teeth, on each side up to 3 well developed lateral teeth, from which extreme 2 - beliefs - tire, and averages 3-vertex. Horn teeth are available also in language, in the depth of an oral funnel. On the top party of an oral disk not numerous small shchetinkovidny teeth settle down. Edges of an oral disk on all periphery have a fringe of foliate type, at the same time males have more massive nimbus of these educations which are settling down in 2-3 rows.

Adult individuals of a ruchyevy lamprey do not eat: the digestive tract at them remains only in the form of a thin impassable tube. Before nereyosty at a female near an anus the zhiropodobny fold serving, apparently, as the tank of nutrients develops. At a male in oblayost of an anus bugorkovidny thickenings with 2 tyomnoyokrasny tyazha ahead of which the kopulyativny body (a sexual papilla) about 7-9 mm long grows are formed. Mature caviar of lampreys yellowish-blue, equal as beads, unadhesive, freely are placed in a body cavity, is well looked through through a thin wall of a paunch, during spawning freely follows in external environment and is right there impregnated by milts of males.

Ikrometaniye occurs in the middle or the end of May when water already well gets warm. Caviar is laid in peculiar nests in the form of prodolgoyovaty oval poles which are dug out by a male and a female. General plodoviyotost about 850 — 1300 berries. Duration of the spawning period is about 2 weeks. After spawning adult forms perish. Vyklyunuvshiyesya from caviar of a larva a little than are similar to adult forms. They resemble elastic, translucent worms superficially, settle in coastal Ils, it is preferable with grassy vegetation. For the first summer they grow to only 2-3 cm, for the second to 6-7, for the third till 10-12, and by the end of the fourth year to 16-17 cm. All this time of a larva is spent having buried in silt where eat detrity and small seaweed. In thickness of water they if leave, then only at night and at the slightest opasyonost bury in silt again. The body of larvae grayish and whitish, is plentifully covered with slime. In comparison with adult forms of a larva have neyoskolko the smaller head, a mouth in the form of a triangular crack, without horn teeth, fins are developed poorly, eyes slabozametny, covered with a leathery film, branchiate openings settle down in a groove. It is interesting that 4-year larvae, ready to a metayomorfoz, considerably massivny adult forms. Body their higher and thick.

Metamorphoses occurs in the winter usually on the 4th, is more rare on the 5th year of life. At transformation into an adult form the body of a larva is shortened, stanoyovitsya slightly more harmonously, eyes open, are rounded branchiate an otveryostiya, bright coloring appears. In a larval state ruchyevy lampreys have a maturing of sexual products, they get all priyoznak of adult forms and are completely ready to spawning.

The ruchyevy lamprey has no trade value. Cases of a serious poisoning of people for soup from ruchyevy lampreys are known: releases of odnoyokletochny skin glands of these lampreys contain poison, resistant to heating, which causes a digestive tract inflammation.

In the practical relation only larvae of lampreys whom fishermen dig out of soil are of interest, choosing larger, and with success use as a bait when catching predatory fishes. In places of mass congestions of adult forms they are caught for sagination of cattle and a bird.

The lamprey Ukrainian is widespread in the rivers flowing in Chyoryony and Azov exhausting (from the Prut to Kuban), and also in the rivers of the western Transcaucasia. In Belarus she lives in all rivers and streams of the basin of Dnieper, and is recently found in inflows of the top Neman where lives together with a lamprey ruchyevy. Their specific isolation here, apparently, podyoderzhivatsya by a difference of terms of an ikrometaniye: the lamprey Ukrainian nereyostitsya earlier ruchyevy, as a rule, in the 1st half of May when spawning of a lamprey ruchyevy does not begin yet.

For the rest the biology of a lamprey Ukrainian and lampreys ruchyevy is similar. They constantly live in the rivers and do not make any long migrations. Adult forms meet only in the early spring, during spawning on sites of the rivers and streams a rapid current and a stony bottom, is more often in the places shaded by coastal vegetation.

Length of a body of a lamprey of the Ukrainian 14-20 cm, weight to 17 g. Females as prayovit, are slightly more fat also massivny than males. Unlike a lamprey ruchyevy back part of the 1st and forward the 2nd back fins of a lamprey Ukrainian smoothly adjoin among themselves.

At a lamprey Ukrainian all teeth at top pointed: at the edges of the top lip plate 2 teeth, on lower 5-9, on each side on 3-4 underdeveloped, as a rule, one settle down - is more rare than double-peak. The sizes of larvae, goyotovy to a metamorphosis, reach 22 cm, but for the period a metamorphosis they considerably decrease. The general fertility of a lamprey Ukrainian makes about 2-2,5 thousand berries.