The Belarusian name - leshch, local - the bream, a white bream. Treats fishes of family of Karpov (Cyrinidae) of group of karpoobrazny (Cyriniformes). 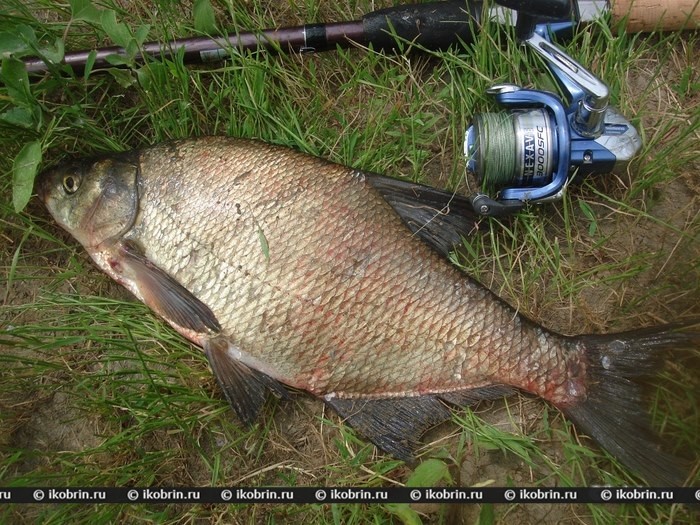 In Belarus it is widespread in all rivers, reservoirs, inundated reservoirs and in the majority of lakes. It is not only in small fast small rivers with cold water and some small lakes. The general coloring of a body dark-silvery, sometimes with hardly noticeable yellowish outflow, a back and the top part of sides dark, a belly silvery. Young breams are painted is lighter. Coloring of the bream in many respects depends on dwelling conditions, as a rule, lake is more dark than river. At polovozrely males during spawning the head, an upper body, sometimes fins become covered by yellowish epitelialny hillocks which after spawning disappear. From guster easily differ in phaeochrous fins, a large number of beams in an anal fin, smaller scales, single-row pharyngeal teeth.

Breams live in flocks, especially big congestions form late fall, before a bedding on zimovalny holes. In the spring these packs break into smaller, concentrate on the most kormny sites of reservoirs. Prefer reservoirs with the slowed-down current or still water, are more numerous in lakes, in reservoirs, on flat sites of the rivers and in inundated reservoirs. Favourite habitats are deep creeks and holes at the abrupt coast which are located at once behind a rift with clay, a little silty bottom in the summer. In lakes adheres to deep sites, coming in a coastal zone and to slopes of underwater heights for food.

Become Polovozrelymi at the age of 4-6 years, at achievement of length of a body about 30 cm and masses about 500 g. At the age of 4 years mainly males ripen, at the age of 5 years and are more senior - bulk of females. In malokormny reservoirs where the slowed-down growth of the bream is observed, terms of approach of a polovozrelost drag on a little. Spawning terms annually are defined by climatic conditions of spring and warming up of water on spawning areas. Usually spawning at breams takes place amicably and comes to the end in short terms.

Breams reach enough large sizes, according to literary data, the maximum length reaches 75 cm and weight - 6 kg. The maximum life expectancy - 20 years. The usual sizes of the bream in ulova - 30-45 cm of length and 500-1500 g of weight. Growth rate of the bream quite high: an average annual gain in the first five years - about 6-7 cm, and under favorable conditions more, within 4-5 cm it remains also in the next years.

Is one of the major food fishes in natural reservoirs. According to trade statistics, an ulova of the bream in Belarus fluctuate within 1200-3000 centners a year.