Treats fishes of family of Karpov (Cyprinidae). In Belarus it is widespread mainly in lakes and inundated reservoirs. The general coloring of a body intensively yellow, to brown, and strongly varies depending on habitat conditions. As a rule, a back dark green, sides light green with golden outflow, a belly grayish. All fins dark. Intensity of coloring of a tench depends on quality of water, soil, illumination of a reservoir. 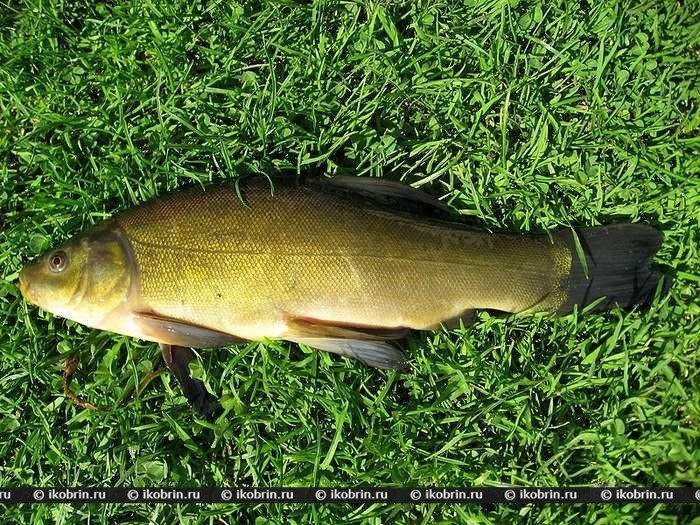 Become Polovozrelymi on the 4th year of life, with a length of bodies about 17 cm of Ikrometaniye portion, happens several times during the summer to the intervals necessary for maturing of the next portion of caviar. Spawning begins late, at water temperature not below 15-16 °C, proceeds usually since May until the end of July.

According to literary data, separate individuals reach 70 cm of length and 7,5 kg of weight. In ulova copies up to 30 cm long and to 1 kg of weight are usual. Growth rate of a tench strongly changes depending on dwelling conditions.

The tench is thermophilic fish, avoids reservoirs with cold water. Malotrebovatelen to quality of water, lives in conditions in which other fishes quickly perish. Constantly keeps in the same places, making small removements only during a high water.

The tench possesses quite high food and tastes, has essential trade value. In a number of pond farms the tench with success is used as additional fish to a carp, increases the general efficiency of ponds to 15-20%. At the same time normal landings of a tench do not reduce efficiency on a carp. At the organization of rational fishery on natural reservoirs value of a tench in fishery has to be considerably increased.