The first Kobrin lock and the roundabout city were founded by successors of the Kiev prince Izyaslav on the island on the place of confluence Kobrinka and Mukhavets. Originally Kobrin was a part of the Galitsko-Volynsky principality. For the first time Kobrin is mentioned in the Ipatyevsky chronicle under 1287 when the Volynsk prince Vladimir Vasilkovich bequeathed Kobrin to the wife Olga Romanovna. Since the beginning of the 14th century Kobrin as a part of Grand Duchy of Lithuania. Kobrin as possession of the Grand duke Lithuanian Olgerd, is mentioned in 1366 in the contract of Lithuania and Poland. At this time in the city also Nizhny Novgorod locks were constructed Top.

The top lock became the princely residence, in it its team was placed. The Kobrin principality arose about 1404 as a result of the section of possession of the son Olgerd of the prince Fedor Ratnensky between his sons Samchuzhka and Roman who became the first prince Kobrin. All the 15th century the Kobrin principality — the independent administrative district as a part of Kobrinskaya and the Pruzhansky volost. In 1497 the last Kobrin prince Ivan Semenovich and his wife Feodora Ivanovna began construction of the Spassky monastery. At the beginning of the 16th century the principality was liquidated, Kobrin with okrugy became a starostvo, submitting to the king Polish. In 1519 Sigismund I gave a starostvo to Anna Kobrinskaya-Belskaya's husband a marshalka to V. Kostevich to lifelong possession. In 1520 — 1566 Kobrin entered the Podleshsky starostvo, since 1566 — as a part of the Brest voivodeship. Since 1532 Kobrin — a manor of Italian Bona Sfortsi, Polish queen, wife of the king Sigismund I Stary. After it Kobrin inherited Anna Yagellonka. At it Kobrin in 1589 acquired the Magdebourg right, the coat of arms, the town hall was constructed. The privileges received by citizens at the end of XVI — the beginning of the 17th century made Kobrin the prospering city. From 1605 to 1635 the Polish queen of Constantius Avstriyskaya owned Kobrin. 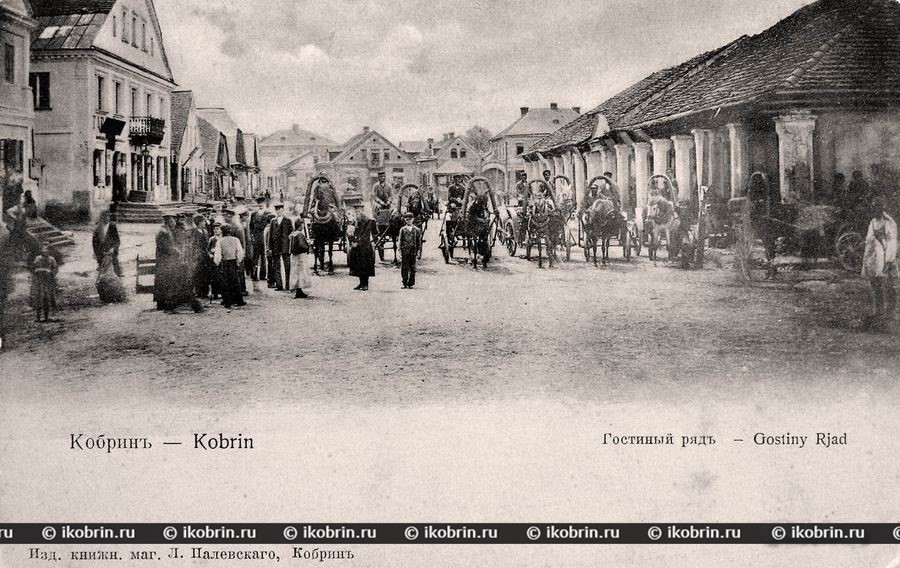 The Kobrin economy existing in the XVI—XVII centuries was created from the state manors, all profit on which went for the maintenance of the Royal Court. Entered economy Kobrin, Pruzhana (Dobuchin), Gorodets and 6 volosts. Volosts were divided into voytovstvo. At the beginning of the 18th century the Kobrin economy was integrated with Brest.

In 1626 in Kobrin there passed the Kobrin church cathedral which defined the basic principles of uniatsky (Greco-catholic) church. To the middle of the 17th century in Kobrin 1700 inhabitants lived in 500 houses. In 1648 Kobrin included the Cossack groups of Bogdan Khmelnytsky. In 1662 during a rokosh the rebelled Lithuanian group rushed into the city. In 1706 Kobrin was plundered and ruined by the Swedish troops of the king Karl XII. As a result the ruined and devastated city became the village and lost the Magdebourg right.

The researcher of Grand Duchy of Lithuania of the 19th century wrote about Kobrin strengthenings of the first half of the 17th century: "The Kobrin strengthened lock existed within 6 centuries. Top and Nizhny Novgorod the lock were surrounded with shaft with front gardens and wooden towers. On the bridge thrown through Kobrinka, people entered serf gate with doors for pedestrians. Behind sidewalls of gate there were several rooms, from above a collar housing with a porch. At each housing there was outer entrance hall with big stone pipes. Gate and doors were locked by poles by means of iron brackets, rings, chains. In the best rooms of a door had shchekoldochka and zapirka with handles, iron and bleached. In rooms there were long tables and benches with a handrail or without handrail, a lime and pine tree. Furnaces are tiled, ornamented brick, or just black. Glass in windows is put in order in wooden or tin frames. From gate the board cathedral over which the external wooden tower towered stretched on the left. Near this wall there was a wooden house with chambers, front rooms, closets, partitions and with necessary for housing for accessories, tables, polatyam, ovens and pipes; under a table an oak chest. In the best rooms of a window in tin frames behind iron lattices. At front rooms several outer entrance hall, a mosquito and storerooms. Doors mostly without bolts and loops; in all lock there was hardly one internal lock.

Behind the house on the serf to a shaft there was a smaller tower. Further the fenced garden with several trees of plums, pears and apple-trees, pivniyets, a porch, something in a sort of an arbor and the storeroom with stone the simple furnace and a pipe. In the following, fourth tower the mill with the screw, behind it stables and a well was located; at last the fifth towers and gate conducting on the top lock and covered with a fence under which there was a cellar with iron doors. The old folding bridge was stored in a high tower, to several floors. With Nizhny Novgorod on the Top lock conducted the shabby bridge on piles; on its middle quite pure baths with the tile furnace were arranged. On the end of the bridge in gate of the Top lock the hoist engine on iron runners, in gate a special fortka is placed. From gate in both parties from the lock stood several towers connected by the stone structures which formed external walls of the defensive line. Some doors in towers were locked by wooden bolts by means of chains and brackets. In strengthenings there were several empty structures. External slopes of parapets were sheathed by wooden boards.

All arms of the Kobrin lock were made: 2 tools, in one lacked the screw; 4 whole coils, and fifth broken off, 15 gukovnitsa, 17 rushnitsa, 6 charging bags to coils. Moreover 2 pieces are gray, a small piece of tin, three cops of iron kernels incomplete and three cops of stone kernels and bullets. On the basis of customs, were engaged in cleaning and correction of the lock, constructions of structures, support of corduroy roads and mill dams in inhabitants.

It is unknown in what look there were strengthenings at the end of the 18th century; veroyato they suffered much during the wars which were tearing apart Poland in the 17th and 18th centuries". In the second half of the 18th century Kobrin restored, in it there was an estate "Kobrin Key", in 1775 the Mukhovetsky channel which connected through Mukhovets Vislu to Dnieper was dug.

During revolt of 1794 in September Kobrin included Suvorov troops. On September 6 at the village Krupchitsy A.V. Suvorov broke risen — S. Serakovsky's case. In 1795 Kobrin was a part of the Russian Empire and was granted by Catherine II in A.V. Suvorov's property — a manor "the Kobrin key". Suvorov ordered to raze all strengthenings of Kobrin. The commander lived in the city in 1797 — 1800.

In Kobrine A.V. Suvorov dictated the memoirs. At the end of the 18th century Kobrin — the district city of the Slonimsky province, in it more than 2000 inhabitants and nearly 400 houses. On July 27, 1812 under the city there took place the well-known Kobrin fight — the first serious victory of the Russian troops over French in Patriotic war of 1812. The vanguard of the 3rd Russian army of the general A.P. Tormasov as a result of battle forced to be given 4-thousand group of the general Klengel — 2 generals, 26 officers, 2400 soldiers, 8 tools were taken prisoner. During war Kobrin was ruined — from 630 houses 550 burned down.

The city was restored. In 1839 reconstruction of the channel was carried out, it received Dnieper and Bugsky's name. In 1846 through Kobrin there passed the highway Moscow — Warsaw, in 1880 — the Polesia railroad. At the end of the 19th century in Kobrin more than 10 000 inhabitants, 1200 wooden and 25 stone houses, several educational institutions. More than 150 000 people lived in the Kobrin County.

At the beginning of the 20th century the Kobrin County of the Grodno province won first place in Belarus on population. World War I forced many inhabitants to go to the Central Russia. Since 1915 Kobrin occupied the German troops, since 1919 — Polish. In July, 1920 parts of Red Army entered the city, but under the Riga contract the city was transferred to Poland as a part of which was till 1939. Since 1939 Kobrin — as a part of Belarusian the Soviet Socialist Republic, the regional center. From June, 1941 to July, 1944 Kobrin was occupied by the fascists who destroyed in the city of 7000 people. In 1970 25 000 people lived in Kobrin.

In Kobrin historical and cultural monuments remained. The hallmark of the city — the military and historical museum A.V. Suvorova. In historic center are located:

The Spassky monastery of the 2nd half of the 18th century from which the inhabited case remained;

Sacred and Nikolaev church of 1750, wooden;

Church of the Assumption of Blessed Virgin of Maria of 1843.