History of the Coat of arms

Kobrin's coat of arms — an official heraldic symbol of the city of Kobrin and Kobrin of the region of the Brest region of Republic of Belarus. It is approved as the decree of the president on July 22, 2004. Is based on the historical coat of arms of Kobrin granted to the city by the king the Polish and grand duke Lithuanian Sigismund III together with the rights for city self-government on December 10, 1589. P. A. Zharov, A. P. Makovtsov, S.E. Rassadin and V. A. Lyakhor acted as authors of reconstruction of the coat of arms.
The coat of arms represents the image on the blue field of the French board of the baby Jesus Christ in gold clothes, Prechistoy Virgin Mary in clothes of red color over a green tunic, in gold free part of a board of just Anna in red clothes over a blue tunic. Over their heads — gold nimbuses.

At the time of the Polish-Lithuanian Commonwealth
In 1589 the king the Polish and grand duke Lithuanian Sigismund III transferred Kobrin economy to possession to the aunt Anna Yagellonka. For development of craft and trade, and owing to and increases in profitability the decision to grant to citizens the right for self-government was made. Anna arrived to the city and solemnly handed to inhabitants signed by the king privily (diploma). On December 10, 1589 Kobrin received the coat of arms: on the silver field two female figures: the maiden Maria and Saint Anna (in honor of the hostess of the city Anna Yagellonka), the Mother of God holds on the baby Jesus's hands. 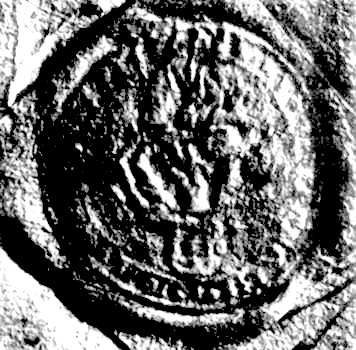 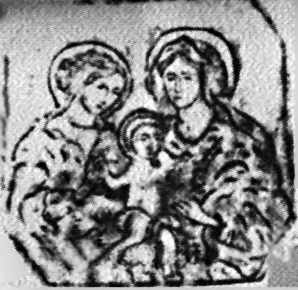 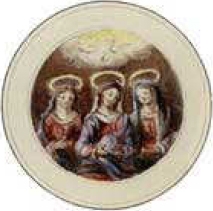 Images of the coat of arms on privileyu 1792 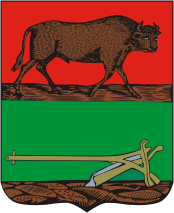 In the Soviet Union

On January 20, 1987 to celebration of the 700 anniversary of the first mention of to Kobrina the decision No. 25 of executive committee of Kobrin city council of People's Deputies approved a municipal coat of arms on Anatoly Nikolaevich Danilyuk's project.

"The basis of the composite solution of the coat of arms is made by a heraldic board on which in the top part the name of the city - KOBRIN is placed, in the lower part - a sickle and a hammer. The middle part consists of a blue dome on which the flying-up stork - a symbol of the Belarusian woodlands, a bird who, according to a national belief, brings happiness is represented. From above the dome is limited by 2 segments - red and green, symbolizing National flag of our republic. Below the dome is limited by 2 merging blue strips symbolizing a confluence of the Dnepro-Bugsky channel with the river Mukhavets that is indicating a geographical position of the city".

On the expertize which is carried out in 1994., this option is not subject to the state registration according to item 10 of Provision on the stamp matrikul of Republic of Belarus approved by the resolution of Council of ministers of 22.02.1994 No. 89 because of the contradiction to fundamental laws, rules and traditions of world heraldry. 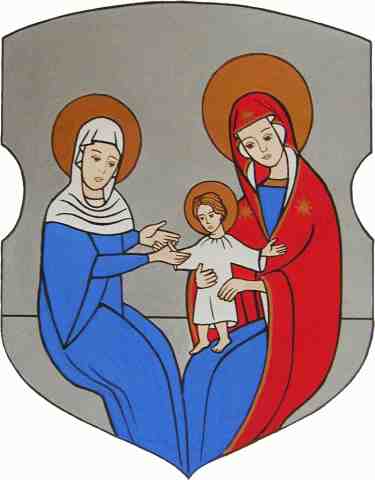 Project of the coat of arms of 1998
February 8, 1998. The Brest regional executive committee made the decision No. 121 "On development new and a reconstruction of the historical coats of arms of the cities of area", according to requirements which and, considering historical realities, the Kobrin Executive Committee of the City Soviet of People's Deputies made the decision on consideration at session of city council of deputies of the sketch of the coat of arms, based on the image on the press of 1589. Subsequently images of figures of Saints on this coat of arms were given orthodox lines, but deputies of city council of deputies did not make a crucial decision.

Considering that the sketch of the coat of arms offered for discussion to deputies based on the press of 1589 comprises religious motives, the management of Kobrin district executive committee addressed its Eminence to the Most eminent Filaret to the Metropolitan of Minsk and Slutsk to the Patriarchal Exarch of All Belarus with a request to express the opinion and to give help in creation and the statement of the coat of arms of Mr. Kobrin and Kobrin district. As it appeared, this sketch of the coat of arms kazuistichen as just Anna, mother Bogoroditsy, died when Maria was a child, and it cannot be represented together with the baby Jesus. Under patronage of exarchate the sketch of the coat of arms based on the image on privily 1662 on which Anna is represented in free part of the coat of arms, in the left top corner, looking down at the Virgin with Christ Redeemer was created. Work was blessed by the metropolitan Filaret, having left on the sketch the autograph.
On December 4, 2002 heraldic symbols of the area were unanimously accepted by session of Kobrin regional council of deputies.

At a meeting of Heraldic Council on December 18, 2002 it was offered to Kobrin district executive committee to make minor changes to the sketch.

After introduction of the recommended changes the coat of arms of Mr. Kobrin and Kobrin district represents a board of the Russian (French) form in which blue field the image of the baby Jesus Christ in gold clothes, Prechistoy Virgin Mary in clothes of red color over a green tunic, and in gold free part of a board - just Anna in red clothes over a blue tunic. Persons and hands of figures - corporal color, over their heads gold nimbuses. The flag of Mr. Kobrin and Kobrin district represents a blue panel 1х2 with the image of the coat of arms in the center.﻿