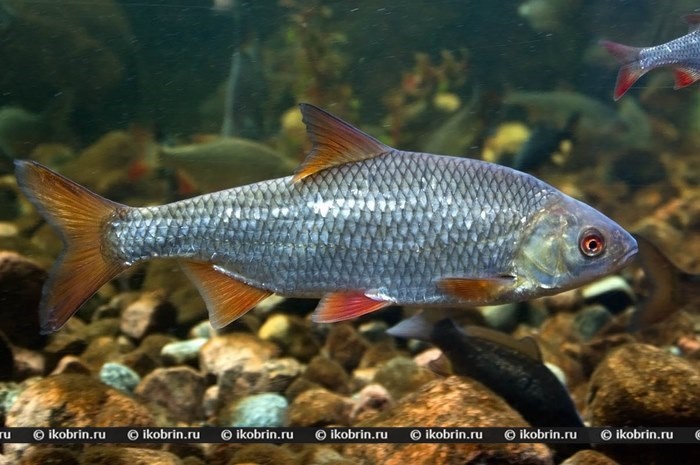 Lives in fresh waters of Europe, to the Urals and the basin of the Aral Sea. Is absent in Siberia, in the Crimea, but it is universal in the Caucasus. In Belarus lives in many rivers and lakes, it is numerous in inundated reservoirs.

The rudd - one of the most beautiful fishes of our fish fauna: coloring its bright, a back dark brown or dark green, sides yellowish-golden, with more intensively painted borders at the edges of scales, an eye orange, with a bright red spot in the top part, back and the basis dark, but at top can have red chest fins, all other fins bright red. Adults are always painted more brightly than young individuals.

Under natural conditions forms hybrids with small fry, ukleyoy, is more often with gustery and the bream. Morphological features of hybrids are intermediate between initial forms. Always leads a settled life, constantly keeps at dense thickets of a grass and absolutely avoids open spaces and a current. Prefers gulfs and staritsa of the rivers, flowing lakes and other quiet places with thickets of water plants. In warm sunny days rises to a surface or leaves to quiet backwaters. Leads a day life, happens motionless at night. Only late fall rudds crowd in deep places and lie down there on holes for all winter.

Becomes Polovozrela in 3-4 years, with a length of body about 10 cm. Spawning begins late enough, at water temperature about 15 — 18 °C. Ikrometaniye portion, happens in May - June, usually in three steps.

To grind rudds eats small planktonic organisms, adults consume young escapes of water plants and seaweed. Animal forages are of secondary importance though insects and their larvae are found in intestines quite often: it brings together them from stalks and leaves of water plants.

In a small amount it is caught together with small fry. Separately by statistics it is not considered. In view of a slow rate of growth and low quality of meat the rudd cannot be considered as perspective fish at the organization of rational fishery. Is of some interest as object of amateur fishery.

In lakes the rudd is caught after full thawing of ice, and in the rivers - after water recession. Especially well it is caught before spawning and three days later after it. It is caught always in herbs, in "windows". The large rudd well undertakes in glades of a cane and reed in quiet places. Biting its true. When catching on a worm conducts a float as a perch. On a rod goes very quickly, is much more persistent than small fry. Lifted from water, it is strongly trembled and more often breaks, than small fry. It is necessary to pull out it carefully. Large copies are recommended be not to pulled out at once, and to move several circles, without letting at the same time in a grass, and then, having brought to the coast, to pick up a net.

As for methods of fishing and a nozzle, they the same, as when catching small fry. Only the tackle has to be a little stronger, and it is better to apply hooks on number more, than when catching small fry. The rudd considerably surpasses small fry in survivability. Therefore small and average rudds are good as the live bait on a pike. Only it is necessary to put them far away from a grass, otherwise they will surely get confused in it.