Occurrence of a carp in natural reservoirs of Belarus is a consequence of penetration of its cultivated forms from pond farms or artificial stocking now. 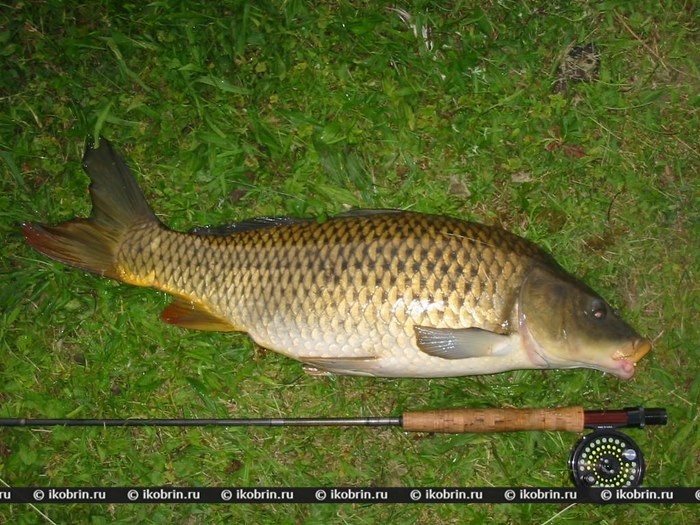 As a result of centuries-old selection work in many countries the various breeds of a carp which became the main in pond fish breeding are created. Differ from an initial form not only appearance, character of a cheshuyny cover, but also faster growth rate, bigger fleshiness and some other useful qualities in the economic relation.

Very thermophilic fish, takes out temperatures to 30-35 °C. In natural reservoirs prefers still quiet waters, in the rivers the channel and inundated the aged man with thickets of water vegetation, in lakes - coastal thickets adheres to gulfs, silent. Well gets accustomed in warm-water ponds. It is a little exacting to quality of water and well transfers the short-term periods with considerable deficiency of oxygen, easily transfers transportations to long distances.

Under natural conditions puberty is reached on 4-6 year of life, males ripen slightly earlier and at a little smaller sizes. In the southern areas an ikrometaniye portion, in moderate including in Belarus, - single, occurs from May to June, at water temperature not below 13-15 °C, most intensively at 18-20 °C.

The carp - one of the most highly productive fishes, differs in exclusively good growth rate. Reaches 1 m in length and 20 kg of weight, in literature there are instructions on the maximum mass of a carp to 32 kg. Growth rate of carps depends mainly on security with food and the long period with water temperature above 20 °C. Most intensively eats and grows at the water temperature of 25-29 °C, and at a temperature below 8-10 °C in general stops food.

Carp - very valuable food fish long since serving as the main object of fishery and fish breeding, winning first place in Karpov' ulova of fishes. For a long time became "domestic fish" and in a large number it is grown up in pond farms.

Almost everywhere the carp is favourite object of amateur fishery, and its fishing - the most fascinating occupation of fishers.