The general coloring dark gray with a set of small dark stains and points on the top half of a body, back and tail fins. The back is gray-green, with not clearly outlined brown spots. In reservoirs with clear water and a sandy bottom ruffs are always lighter, than in the silted reservoirs. 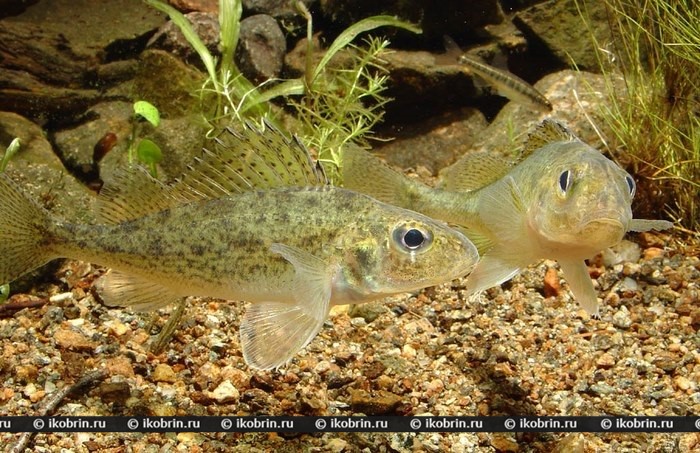 One of the most numerous fishes of our reservoirs. During the entire periods of year keep the packs consisting of individuals of different age. Lead a benthonic life. Places of its dwelling often coincide with habitats of valuable trade types, especially the bream with whom the ruff is a strong competitor on food.

Puberty reaches in two years, at achievement of length of 6-7 cm of Ikrometaniye portion, occurs since the end of April on June, in stages. The first spawning is observed at a temperature about 6-8 °C, the second and the subsequent - at more high temperatures.

The usual sizes of adult ruffs - about 10-15 cm of length and weighing 20-25 g which it reaches at 4-5-year age. The maximum sizes - to 30 cm, weighing 600 g, but such copies are rare, come across only in the large rivers. Only in the first two years the linear gain of a ruff reaches 4 cm, but from third year happens insignificant. The gain of weight makes only several gram a year.

Big gluttony, early maturing and high fertility cause the big number of a ruff in reservoirs. However because of low growth rate, big extent of the competition in food to valuable fishes, and also because of the big harm done to fishery by destruction of caviar also thresh,