International importance:
It is protected in Europe (The appendix II of the Bern convention). It is included in the MSOP Red List (VU, ver. 2.3, 1994); in Red Lists of Lithuania and Ukraine. 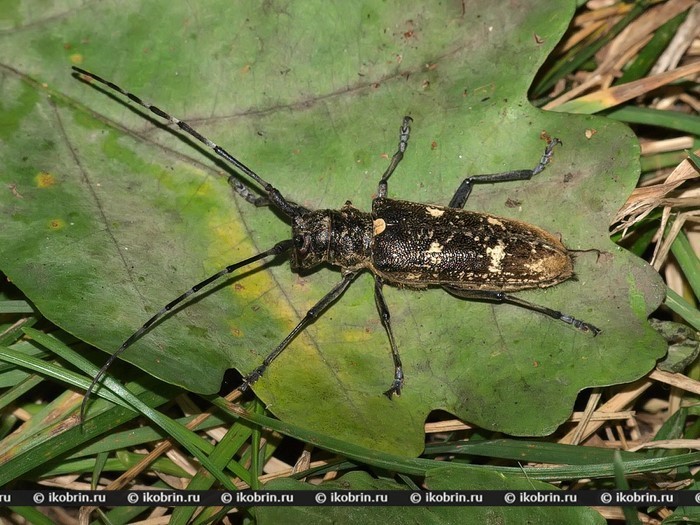 Rasprostraniyeniye:
In the south of Belarus the western subspecies live (C. c. cerdo L.), which is widespread in Western Europe, on the North - to the southern part of Sweden, and on the East - to Kharkiv in Ukraine. Within the last 20-30 years it is found only in inundated oak groves on coast of the river Pripyat. One copy was found in the late nineties in surrounding of Cancers. It is noted in Bialowieza Forest. Russia: South of the European part, Caucasus; Moldova, Transcaucasia; Sowing. Africa, Europe, Middle East, Iran.

This look is divided now into a number of subspecies from which the Caucasian S. cerdo klinzigi Pod., according to a number of authors, it is most isolated morphologically.

Nature of damages and biological features. Larvae do considerable physiological harm, and from second year — and technical. It is specified as the dangerous wrecker in oak groves of Krasnodar Krai, Ukraine, Georgia. Occupies the tolstomerny growing and weakened trees, in particular, suddenly appeared on light at kulisny cabins. Prefers thick trunks. But can occupy also relatively young trees, even thin trunks and stubs. It is easy to find populated trees on nateka of dark juice, congestions of boring flour, and later and to existence of flight openings. Generation 2 — 3-year-old.

The larva originally gnaws the course under bark, for the second summer passes into a sapwood, and then is deeper in wood. The course in wood has a characteristic structure, a form reminding a hook. Total length of the course reaches one meter and even more. Usually for the third summer in July — August the larva gnaws a cradle where it pupates. Otrodivshiysya here the bug usually also winters (Founders, 1940). Bugs leave from May to August. Are active in the afternoon, eat the juice which is emitted from wound wood. Eggs are laid on one in cracks and cracks of bark or in narrow openings in bark (the courses of other ksilofag). Fertility on average to 100 eggs.

In the last decades on part of the area the big oak man with a big mustache became rare and as esthetically attractive object and the inhabitant old, sometimes relic oak groves was brought in the Red List USSR (Lopatin, 1984). In the 80th years of the 20th century in Krasnodar Krai the question of the one who should be protected a bug or relic oak groves which it damages was discussed.

Morphology (including the diagnosis). Representatives of the sort Cerambyx L. The man with a big mustache big the large extended bugs, 17 — 60 mm long. Head and cheeks quite long. The head without sheevidny banner behind poorly developed temples. Eyes. m largely fasetirovana. Short moustaches at a female usually considerably, and at a male are much longer than a body, their 1st chlenik is strongly thickened, the 2nd. the m is short, 3 — the 5th chlenika strongly knotty. Perednespinka on sides from B. m a sharp hillock, on a disk in the rough, mostly incorrectly mixed folds. Wing sheaths are long, quite often considerably narrowed to top. Long legs, but back hips do not reach tops of wing sheaths.

Larvae white, with rare not mine shchetinka. The head yellow with a black first line. Frontal seams not clear. A first line of a forehead of a straight line, in small longitudinal grooves. There are about 3 large peepholes from each side of the head and, besides, additional eyes on a ventral and dorsalny surface of temples. Whisky in rough, deep wrinkles, strongly and widely sklerotizovana. The roller on temples if is available, then small and rather smooth. Often there are subfossalny teeth. Upper jaws outside rather smooth, with a cross vdavleniye. The Maksillyarny blade narrow, is covered with shchetinka on an internal surface. Perednegrud with bright yellow spots on a pronotuma and alarny shares. The main part of a pronotum is covered with deep longitudinal grooves. Tergit srednegrud it is divided by X - a figurative seam, and tergit zadnegrud — the wrong cross furrow. Tergit zadnegrud and sternita average and zadnegrud are distinctly largely granulated. Legs are developed rather well, consist of 5 parts. Callosities of a paunch are distinctly granulated (Mamayev, Danilevsky, 1975).

Page segao — a pitch-black, brilliant bug, which topmost part of wing sheaths red or brownish. Perednespinka in rough worm-shaped folds, wing sheaths on the basis grubomorshchinisty. Ddina of a body of 23 — 60 mm. the 2nd chlenik of short moustaches less than twice more widely than the length, the 3rd and 4th chlenika only moderately knotty at tops. The sutural corner of wing sheaths is extended in a clove.

Number and tendency of its change:
In recent years single copies are observed.

Major factors of threat:
Usykhaniye and cutting down of old oaks.

Protection measures:
The look is included in the 2nd edition of the Red List of Republic of Belarus (the II category). Preservation of sites of old-age oak groves or, at least, separate perestoyny trees in National parks "Pripyat" and "Bialowieza Forest".