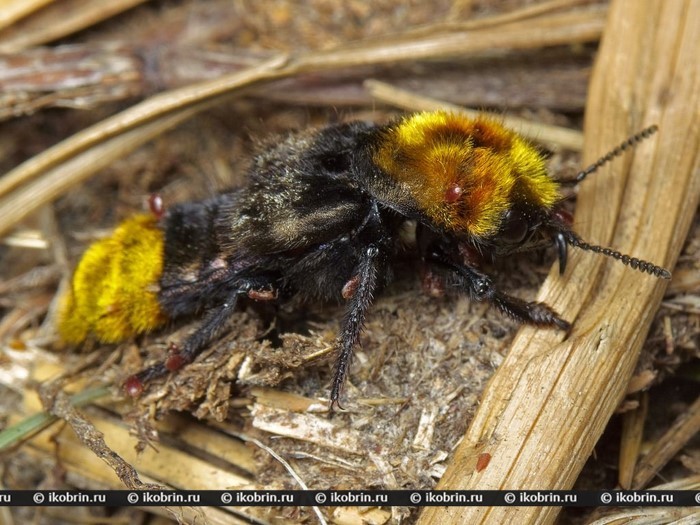 International importance: The look is included in the Red List of Ukraine.


Description:
Bug (18-28 mm) black with dark-violet metal gloss. All body is covered with long dense hairs, golden-yellow on the head, a perednespinka and top of a paunch. On the basis of a paunch and wing sheaths hairs black, top of wing sheaths with a sling from gray hairs. Wing sheaths are shortened.

Rasprostraniyeniye:
The Southern, Western and Central Europe on the North to the British Isles and Scandinavia (Denmark and the southern Sweden). Caucasus, Turkey, Iran, Kazakhstan. In Belarus meets locally across all territory. It is noted in Bialowieza Forest and National park "Pripyat". The most numerous population is known from the Berezinsky reserve.

Habitats:
Meets in the woods and on open places, under excrement, drop, on the following juice of trees (mainly birches).

Biology:
Bugs meet from May to October, are most numerous since the end of May till July. The predator, hunts on larvae of insects-koprofagov in manure and other decaying substrata. Larvae of a bug also hishchnichat.

Number and tendency of its change:
Rare species. The tendency of change of number is not known.

Major factors of threat:
Change of the mode of use of the farmland.

Protection measures:
The look is included in the 2nd edition of the Red List of Republic of Belarus (the III category). Preservation of the existing environmental management mode in places of localization of the largest populations of a look.