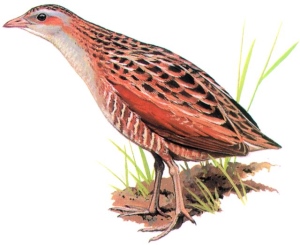 Number and tendency of its change:
In the past and now it is brought in domestic literature as the usual nesting look. According to expert estimates, look number in Belarus makes 26-32 thousand vocalizing males while the all-European population (without Russia) contains 98-112 thousand. For the last 20 years number in Belarus decreased slightly, however in the majority of the countries of Europe for the same period - by 20-50%.

Protection measures:
In Belarus in 1996 the look is excluded from the list of hunting. Special measures of protection of a look in the republic were not taken. In optimum habitats (inundated meadows) with high concentration of birds it is necessary to regulate terms and to observe mowing methods for the purpose of preservation of nests and broods.

Description of a look:
Average sizes bird. Length of a body is 24-30 cm, wingspan of 41-53 cm, weight to 300 g. A shape of a body and appearance reminds pogonyshy more, than larger types of family (a kamyshnitsa, a bald-coot). Plumage dim gray or yellowy-brown with dark (almost black) spots on a back. During reproduction at a male the dark "hat" and gray coloring of cheeks, a throat and a craw contrasting with the general tone of plumage is allocated. The covering wing feathers, and also swing (external and internal surfaces) are painted in reddish-brown color that is characteristic difference of a bird in flight.

Distribution:
The area of a look includes all Europe (except for extreme southern and northern parts of the continent), the western and Central Asia. The eastern frontier of an area is definitely not established.

Biology:
Nesting flying and tranzitno the migrating look. In the southern part of the country to places of nesting arrives in the 1st decade of May, in the north a bit later. Mass flight takes place in the 2nd - the 3rd decades of May. Nests in separate couples, at the same time it is inclined to form nested groups. Leads a reserved life, during the marriage period in places of nesting "crack crack" is well identified on the sharp disyllabic sounds made by males. Places nests on the earth on the dry place in a grass curtain, covering with zalomanny stalks, in a bush. The laying appears in the last days of May - the beginning of June. 37,0 × 27,0 mm consist, as a rule, from 8-10 (more rare than 6-7 or 11-12) eggs the sizes on average. Nasizhivaniye lasts 15-17 days. Baby birds hatch in the middle of June - the beginning of July though in the same time it is possible to meet also fresh layings (repeated). Baby birds leave a nest as soon as dry. The basis of food is made by medium-sized invertebrates. Flying away begins with the 2nd decade of September, cases of registration of birds up to the middle of October are known. Winters in Africa to the South from the Sahara, on the island of Madagascar. The part of population remains in the south of Europe and Asia, in northern part of Africa.