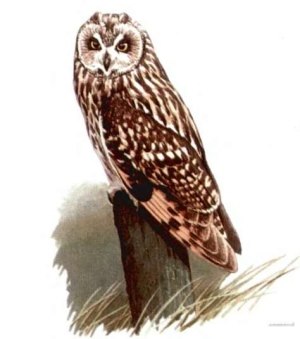 Short description. An owl of the average sizes (crows are slightly larger). Length of a body is 34 — 43 cm, wingspan of 84 — 110 cm. The mass of a male is 218 — 450 g, females of 237 — 430 g. The general tone of coloring grayish and ocherous, with numerous dark-brown pestrina. Plumage of a belly, legs and lower side of wings lighter, ocherous-white. Differs in very short peryevy "ears", black feathers around eyes from a big-eared owl, externally similar to it, and the wings which were less speckled from the lower party. Raduzhina of an eye yellow, beak and claws black.

Distribution. The nominative subspecies are widespread in Europe, northern part of Asia, North Africa. The European population nests from the Arctic tundra to steppes. The largest populations are concentrated in Russia, Finland, Sweden, Norway, Great Britain. Throughout an area spotty, and settlements are not constant. In Belarus meets across all territory small changeable settlements.
Habitats. Lives in open territories — low-lying and transitional bogs, boggy inundated meadows, is more rare in crops of long-term herbs in the reclaimed territories. During migrations and wintering it can be met also on fields, sukhodolny meadows, on forest edges.

Biology. Nesting, flying, in separate years in insignificant quantity the wintering look. Arrives at the end of March in the spring — the beginning of April. At once after an arrival of couple occupy nested sites and males make current flights, circles rising highly in the sky and periodically letting out characteristic cry. At the same time the tokovaniye can be observed not only in twilight and night, but also in a morning and day time, it is frequent at a bright sun. The nest builds on the earth, under cover of low bushes or a high grass, covering it dry small stalks and shreds of a moss. Otkladka of eggs happens in April, at some couples later — in May and even at the beginning of June. In the finished laying from 5 to 10 eggs (Depending on the number of the main forage — mouse-like rodents). Eggs white, Places average sizes of 39,9 x 31,3 mm. Nasizhivayet female, about 27 days. Still non-flying down baby birds soon run up from a nest; they begin to fly at the age of about 26 days. Autumn flying away proceeds slowly, separate individuals meet up to the end of November. A food basis — mouse-like rodents, first of all voles and water rats. In summer months in a small amount baby birds of small birds are eaten. 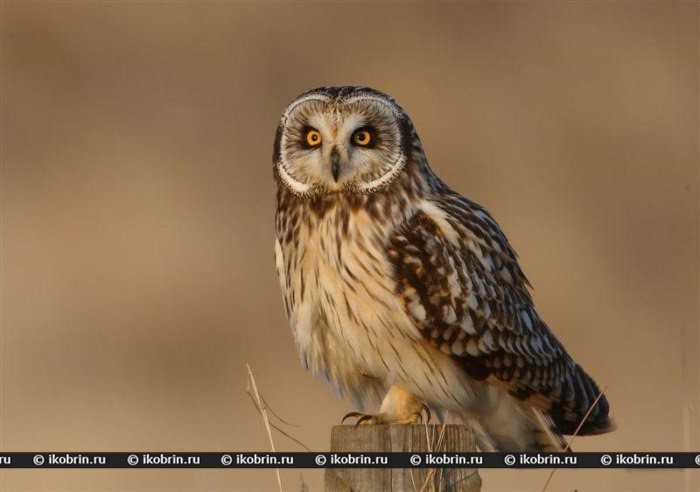 Number and tendencies of its change. It is estimated within 500 — 1500 couples (3% of look number in Europe). The obvious fluctuations of number determined by a condition of food supply (mouse-like rodents) are characteristic. Though the marsh owl disappeared or significantly reduced number in the central part of Europe in the last decades, rather high number in a number of regions of the North of Europe represents an essential reserve for peripheral parts of an area.

Major factors of threat. Drainage of low-lying bogs, inundated meadows, overgrowing of open sedge bogs and meadows bushes, spring burning out of meadow and marsh vegetation, and also illegal shooting of birds by hunters and taxidermists.

Protection measures. The look is included in the Red List of Republic of Belarus since 1993. Preservation of low-lying bogs, control over spring floors of vegetation, and also rigid regulation of private taxidermy.